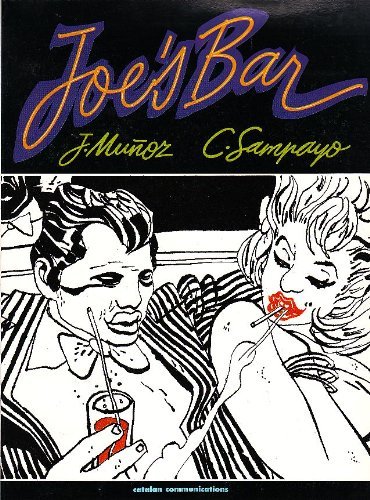 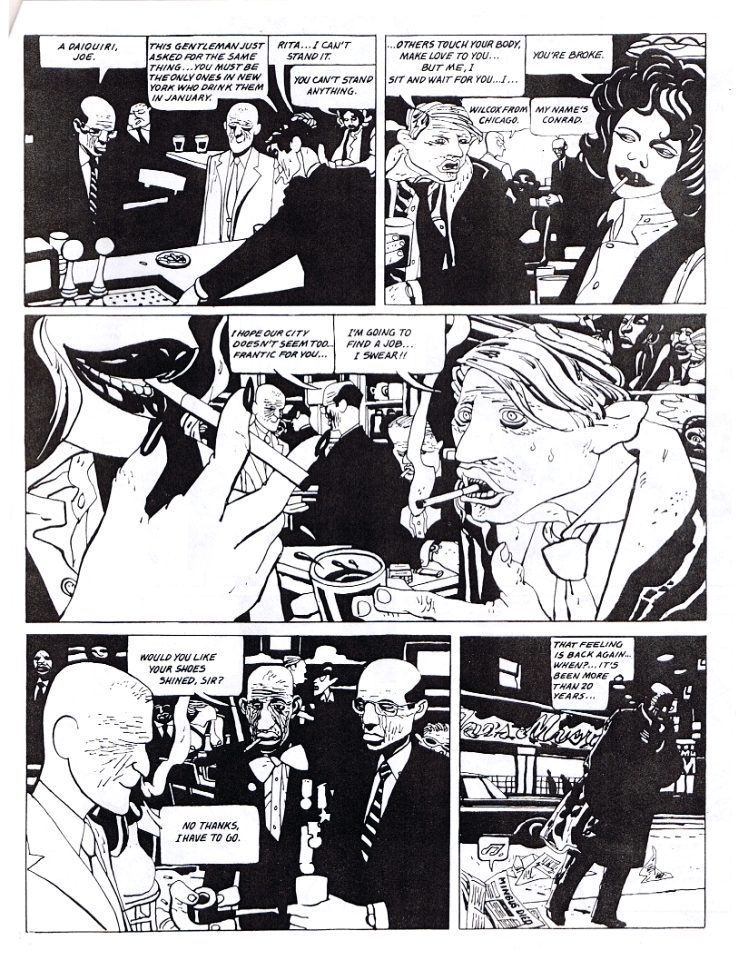 Joe’s Bar is a late-night hangout introduced in the Alack Sinner series of graphic novels about a New York private eye, the first work artist Jose Muñoz and writer Carlos Sampayo collaborated on in the mid-1970s. Joe is a narrow eyed, narrow mouthed enigma who runs his rather sleazy business and tries to avoid becoming involved with anything, and yet despite his best efforts always seems to be drawn into the lives and problems of his patrons.

Joe’s Bar collects four of a series of short stories about the background characters in Sinner’s life who congregate at the bar. Two further Joe’s Bar stories were translated and published in Raw, which explains why the fourth story in the collection, rather confusingly, is titled ‘Fifth Story’.

Muñoz, a student of Hugo Pratt, draws in a very caricatured, robust style, heavy on the black, that owes something to German Expressionist artists like Grosz and Beckmann, and to woodcuts and lino prints in the way it uses dense flat areas of black. Distortion expresses emotion in Muñoz’s style, which is very distinctive. From Pratt he learned the discipline of keeping to a regular grid to tell his heart-rending stories of fear and anxiety and bad luck.

In ‘Pepe the Architect’ a young architect without a Green Card clears up after hours at the bar to earn enough to survive, feeling, probably with good cause, that everyone and everything is against him. A woman who picks him up challenges this self-pitying motion. In ‘Rusty Stories’ a washed-up boxer takes on an over-the-hill wrestler in an exhibition match, an idea hatched up at the bar. ‘Ella’, perhaps the saddest story of them all, about a hypochondriac photographer who thinks she’s finally found love, only to learn her boyfriend prefers men, links into the other stories as she shoots and interacts with the various other characters who appear there. ‘Fifth Story’ is about the pudgy, easily influenced Mike, drawn into an ambivalent relationship with Rosa, who comes to believe his dying father is asking for help to end it all.

In these dramatic vignettes Sampayo captures the desperation of life on the edge, of a group of people with nowhere to call home but a dive bar, and Muñoz uses distorted and tortured lines to express their emotional suffering to great effect. Beautifully put together, these are all little gems.