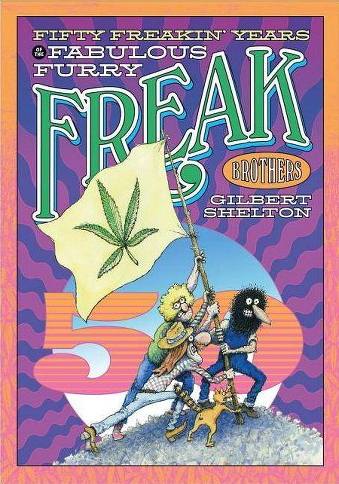 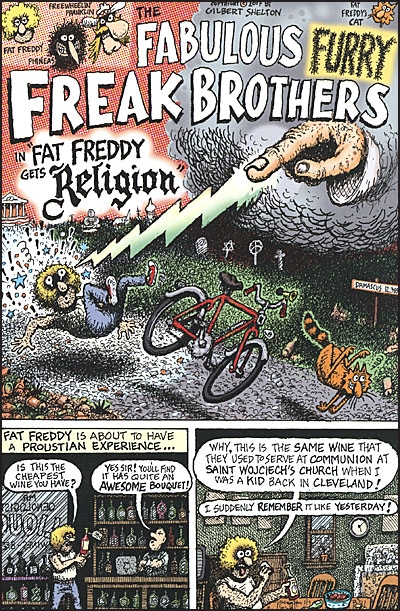 Despite Robert Crumb’s status as the top dog of Underground comics, the Fabulous Furry Freak Brothers are the form’s most recognisable characters. As the title notes, when published in 2017, fifty years separated the guys from their début, and more years have since passed, so how relevant now are three weed-obsessed hippies?

Very, as it happens, and the reason for that is because while each generation has their favourite comedy, good gags never go out of fashion. You don’t need to know anything about the characters or their origins to appreciate the slapstick of Freewheelin’ Franklin’s attendance at a gun fair and what it sets off, nor to see that Shelton’s cartooning skills are immense. He’s also moving the characters forward by incorporating near contemporary events. Some people might be offended at Phineas being recast as a hapless suicide bomber because he’s way off the mark in trying to impress a woman, or Fat Freddy stoned off his nut discovering religion, but they’re funny strips.

28 pages of new strips are promised on the back cover, which seems very few considering the overall page count, but no-one’s shortchanged here. The remainder of the book is a total treasure trove for fans. Shelton’s memoir pages run through his career until the 1980s, accompanied by photographs, illustrations and memorabilia. More of that appears throughout, along with the fantastic character sheets produced for an animation. Previous Freak Brothers collections haven’t included strips where Shelton loaned his characters to other creators, so here we see them as defined by Hunt Emerson, Jay Lynch and the combination of Ted Richards and Willy Murphy. Scotland Yardie’s Bobby Joseph and Joseph Samuels produce a new strip for this collection, and there’s another where Shelton borrows Crumb’s Mr. Natural for a chat with Fat Freddy.

What might seem like a dashed together celebration is actually anything but, and if you’ve ever laughed at the Freak Brothers in the past you should pick this up.