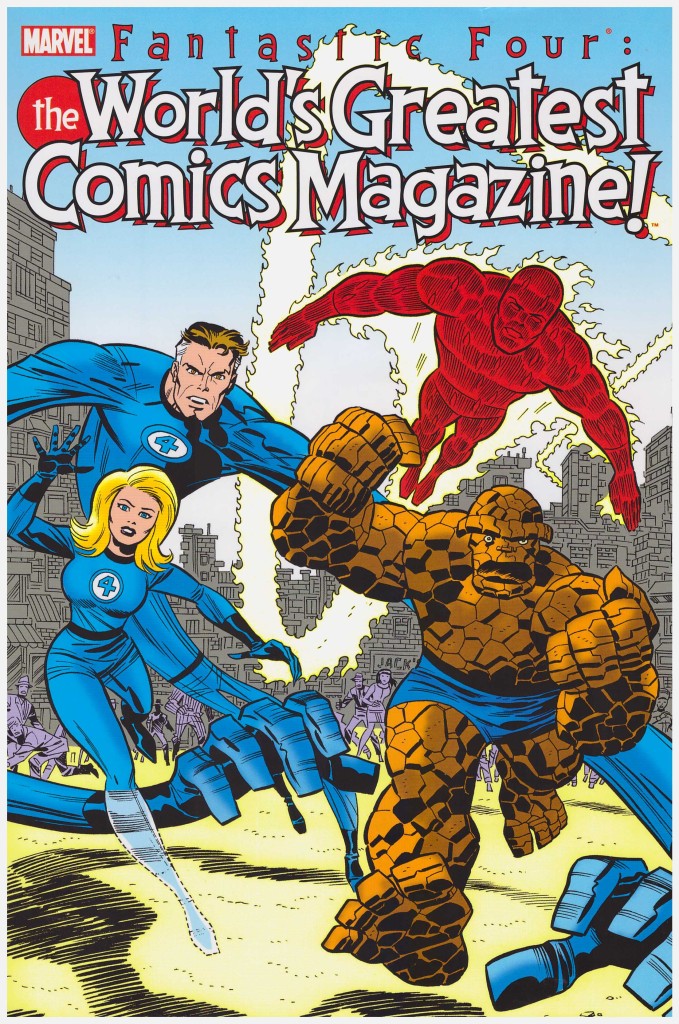 To superhero fans of a certain generation this may prove an irresistible confection. It’s a loving homage to the Marvel universe of 1970 and an attempt to produce a multi-chapter story extending the run of Stan Lee and Jack Kirby’s Fantastic Four comics in their style. The comics collected were issued to celebrate the FF’s 40th anniversary in 2001, but the 2011 hardcover publication has them doubling up to celebrate the 50th also.

The layouts and designs mimic the way Kirby constructed his pages, but successfully reproducing his art style of the period is a harder task, and some surprisingly talented names fall a little short, while others are more successful. The involvement of Joe Sinnott, the man who inked Kirby’s pencils of the era is key, most often polishing the pencils of Ron Frenz. The pencil and ink teams keep switching for assorted combinations. Jorge Lucas and Al Milgrom are particularly effective, it’s very pleasing to see Mike Royer inking sequences featuring the FF and Thor, and Rick Veitch is diligent enough to include some Kirby style photographic background collages.

Hitting the correct tone of winking humour, inflated captions and suitably portentous dialogue as applied by Lee at the time is trickier than might be imagined. Only Tom DeFalco is entirely successful, ironically bettering the latter day Lee, who scripts the final chapter.

It’s been obvious throughout his career that Erik Larsen was hugely influenced by Kirby as an artist and a storyteller, and with his Savage Dragon series Larsen followed Kirby’s dictum of not just being an imitator, but using the tools to create something original. It’s experience that makes him an ideal choice to plot these twelve chapters, and he also provides layouts for most (with Keith Giffen supplying the remainder) to ensure an artistic continuity. Others heavily involved are co-plotter and sometime scripter Eric Stephenson, and Bruce Timm as a scripter, penciller and inker.

The story is intended to slot between Fantastic Four 100 and 101, just before Kirby’s departure, and Larsen’s done his level best to include pretty well every Marvel superhero of the era. One forgets the Falcon’s costume was once an unpleasant green and orange, or the misguided period when Hawkeye stood in for Goliath. Including as many of the characters Kirby created for the FF as possible requires some plot jiggery-pokery, but some real obscurities are featured.

Doctor Doom leads the FF a merry chase as he acquires objects of world-shattering power, while Larsen and co-plotter Eric Stephenson, throw in plenty of nice ideas along the way. The Thing and Human Torch take a turn in the X-Men’s danger room, a collection of oversize enemies gather on the moon, and Larsen’s layouts ensure one massive pin-up page per chapter. Sadly, all too few feature the Fantastic Four themselves.

For all that proceedings are rather dragged out to include as many characters as possible, and the conclusion is rapid and convenient. World’s Greatest Comic Magazine is a lot of fun, but where the whole conceit falls down is that the fun prevails. The plot never outgrows its homage origins, and the sense of tension supplied in the comics inspiring it is largely absent.