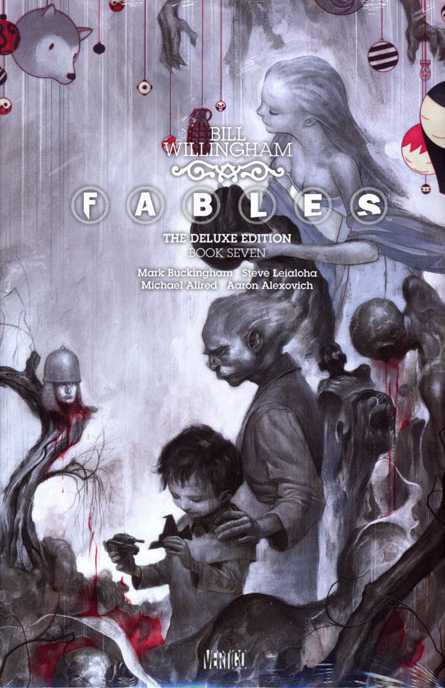 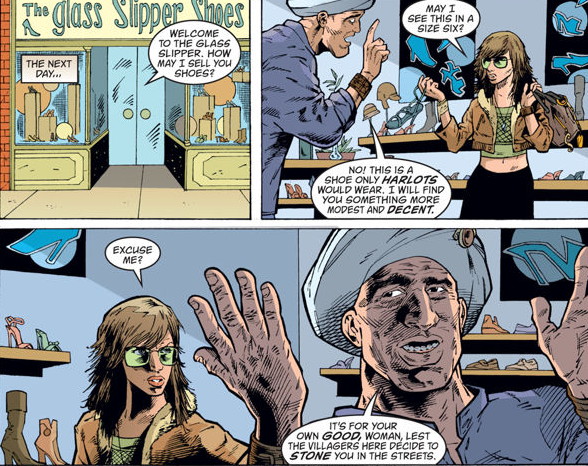 Interestingly, for the first time here the deluxe editions depart from a strict chronological reprinting of the series to create more evenly collated volumes. The bulk of this book is the Sons of Empire collection, but it also floats in a chapter from The Good Prince enabling a smoother read over both volumes.

The grafted chapter is not very appealingly drawn by Aaron Alexovich. Even with the focus on Snow White and Bigby’s children there doesn’t seem to be any real excuse for his distorted, wide-eyed figures, and this is one of the few artistic failures throughout the entire series. Unfortunately another lesser number is also included here as Michael Allred makes little attempt to modify his style to ensure visual consistency with the established look of some cast members. His Bigby isn’t bulky and fearsome, but lithe and athletic, and his Pinnochio a small wide-eyed boy. He’s also less suited to what’s actually a good and very dark tale of Bigby settling some family scores.

A variety of guest artists contribute to short tales either focusing on previously unseen Fables such as Rapunzel, or brief illustrated sequences answering questions from readers about plot points. One of them introduces Kevin Thorn, who’s later a threat in The Great Fables Crossover, and there’s laughs to be had seeing Hakim attempting to work in retail or Jack’s farewell to Fabletown.

Mark Buckingham illustrates the sections continuing the established plot thread. The Adversary is concerned about the incursion into occupied territory, and gathers those able to construct a long-term plan for dealing with Fabletown. Among them is the Snow Queen. In the Fables Encylopedia Bill Willingham notes his childhood love of the Narnia books, in which she’s the basis for the White Witch. All other Narnia characters remain under copyright, but the source from which the White Witch was drawn slotted right into the ongoing Fables saga as a villain. Buckingham’s imperious design reflects the allure of a woman with a heart as cold as her abilities.

Amid all this there’s a joyous Christmas tale. It’s largely set around children, but includes some endearing interaction between Boy Blue and Rose Red, sets up Flycatcher for the future, and has a guest slot for Jack.

This is a wide-ranging selection of material, offering a variety of approaches to the Fables cast, both in terms of writing and art. It’s unlikely that 100% of the content will appeal to every reader, but enough will to make this a worthwhile purchase. The content is also packaged with much from before and much that follows in the massive paperback Fables Compendium Two.