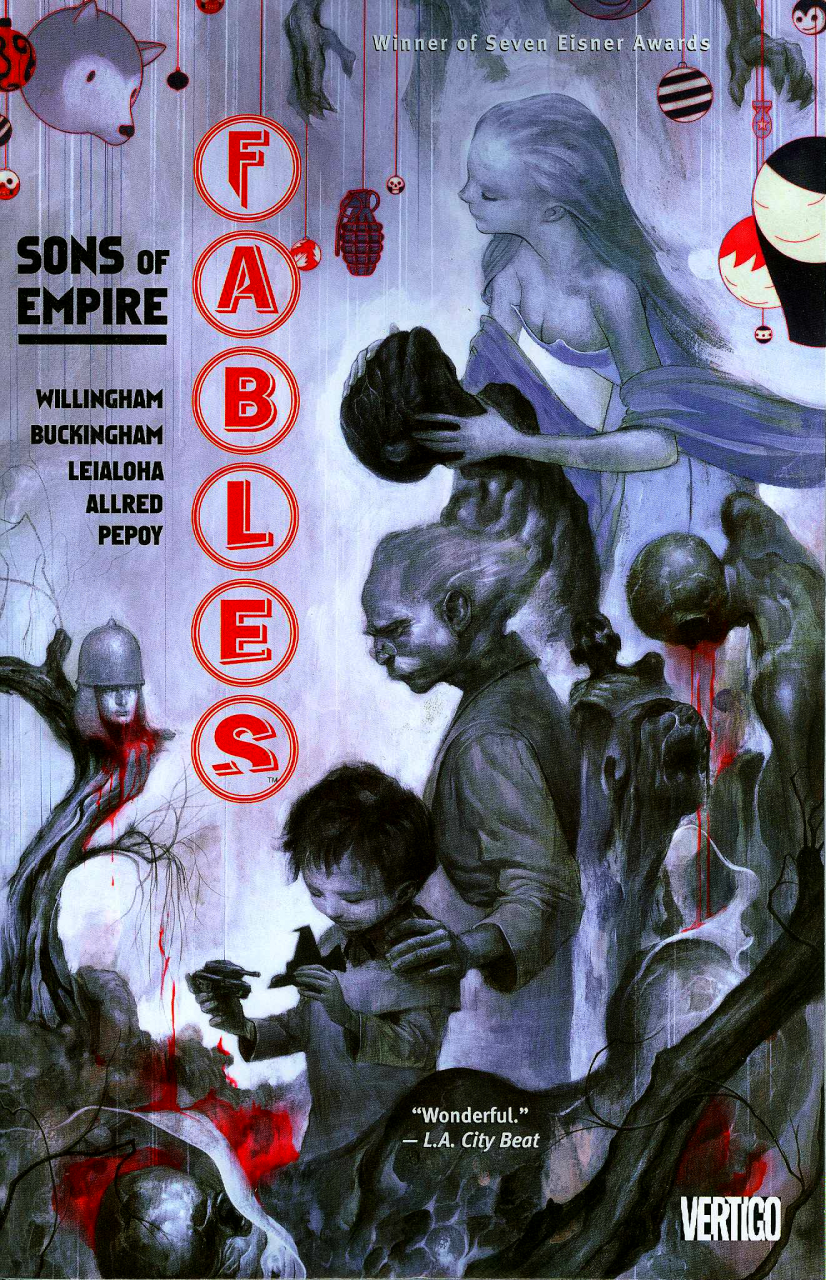 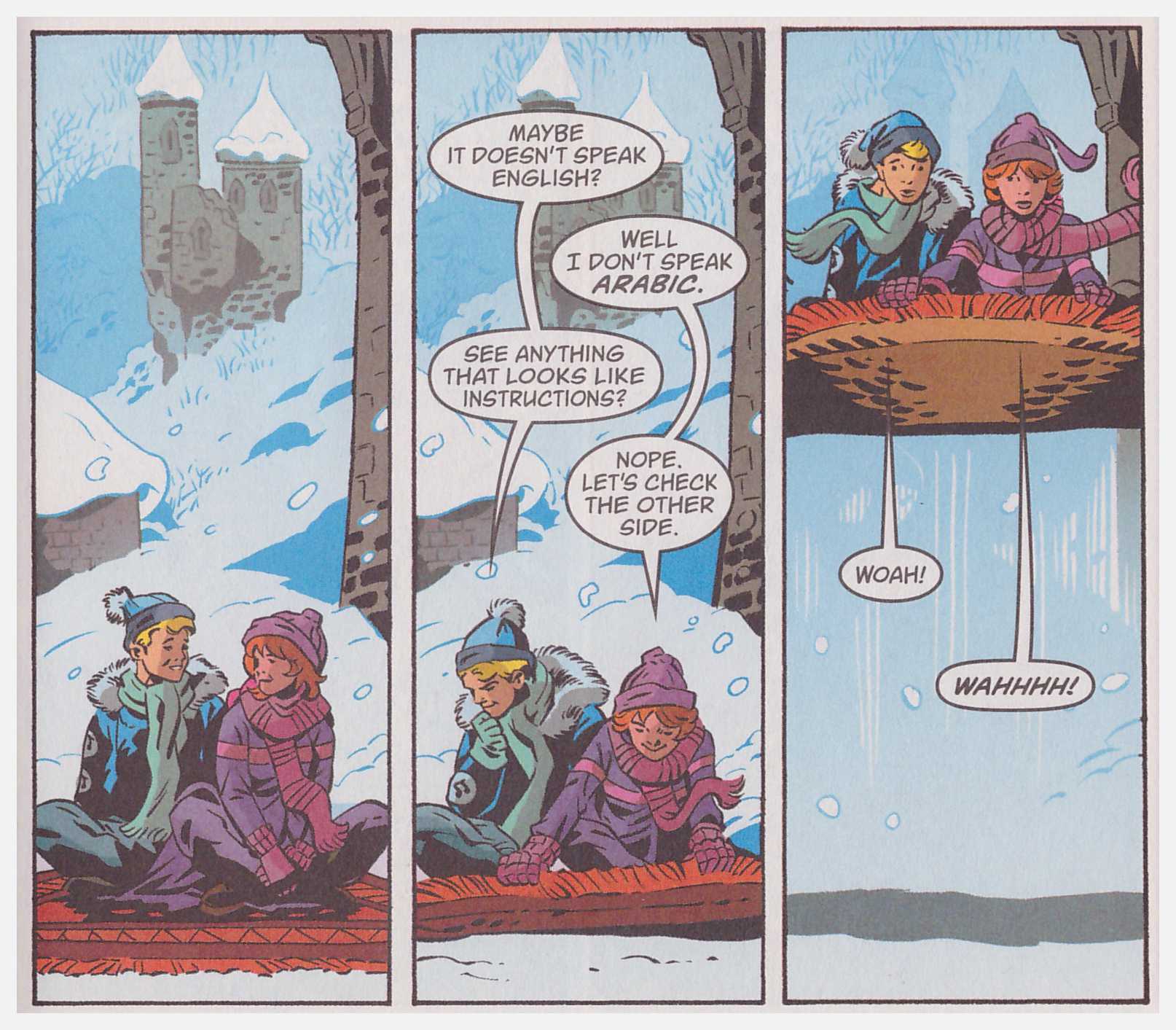 While not a five star collection, in many ways this is the ideal Fables book in terms of representing the series. There’s enough Mark Buckingham art to keep everyone happy, yet over a dozen guest artists illustrating chapters sometimes restricted to a single page. There are a few chapters dealing with the ongoing plotline, yet time for a charming Christmas interlude, and a father/son issue to be, if not resolved, then dampened. It’s rounded off with an enjoyable sequence of illustrated answers to questions posed to writer Bill Willingham by readers.

There’s a quickening pace about Fables from this point as over the next three volumes the long-running stand-off between the Fables on Earth and their occupied homelands is ended. Sons of Empire continues from one element of Wolves, and begins with a convocation of the nastiest leaders reporting directly to the Adversary. Some know his true identity, but others don’t, and they’re gathered to discuss the best way of settling the problem Fabletown has become. Let’s just say their solution is resolutely unpleasant, and the first stage is appointing a consul.

That falls to Hansel, not seen in Fabletown for centuries since he was expelled for his relish in joining in the human passion for burning witches in the 16th century. Given his childhood experience his zealousness is perhaps understandable, and his arrogance and contempt hasn’t diminished over the years. As Hansel is German Bill Willingham has drawn on a particular period of 20th century Teutonic history to characterise him.

If you want to know which Fabletown residents have consulted the magic mirror, how many conquests Prince Charming has had, or what Frau Totenkinder is knitting, well the answers are here. Similar questions appear to have already been addressed by short stories preceding this section in which previously unseen Fables such as Rapunzel and the three blind mice are spotlighted.

Santa Claus is another previously unseen Fable, and there’s a clever connection with both Bigby and Jack, and while the kids want to question him, Flycatcher is set up for his progress in the next volume, The Good Prince. Mike Allred illustrates the sequence of Bigby attempting to reconcile with his father at Snow White’s behest. Allred is at home with bright superheroic whimsy, and suppressing his natural inclinations for a tale of dark wolf drama isn’t entirely successful. Willingham’s story delves into Bigby’s past, and some family secrets, with time for a short and unpleasant interlude between another father and son. It’s a shame there’s no visual consistency for that sequence. Allred’s art for the briefer ‘A Thorn in their Side’ is far more suitable.

Other guest artists apply a variety of styles, but for the most part they’re working with characters less central to the series. The entirety of the book can also be found on glossy paper stock in oversize hardbound format as Fables Deluxe Edition volume seven. 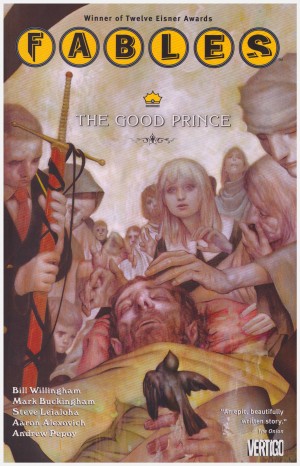 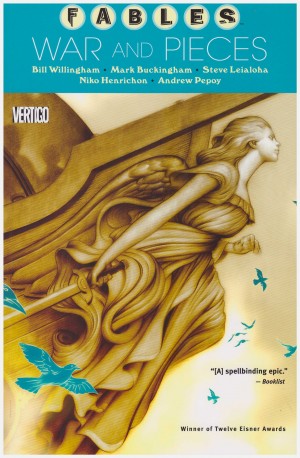 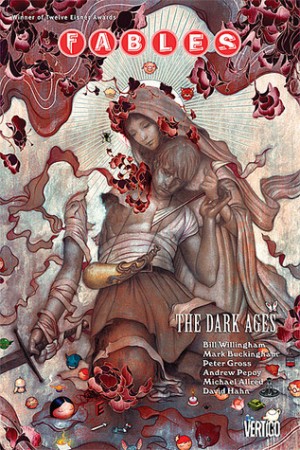 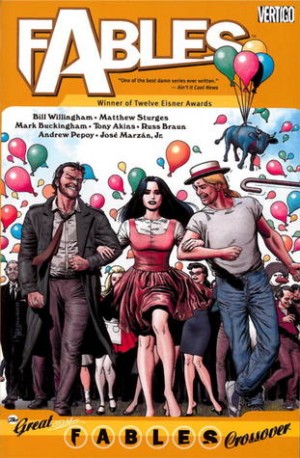