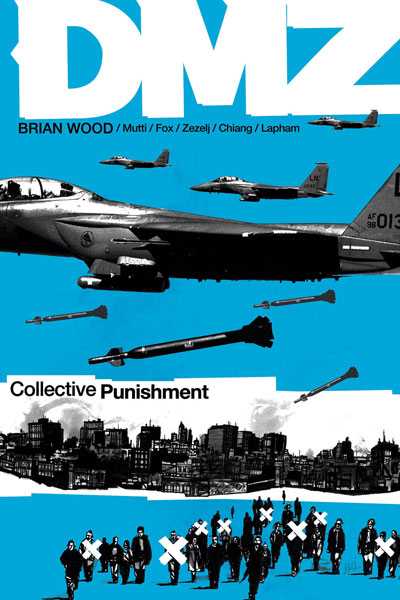 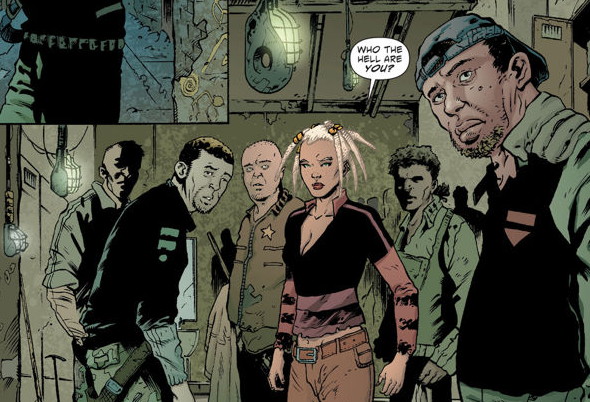 It was revealed in M.I.A. that the US government forces intend to reclaim Manhattan, and that the opening gambit would be blanket bombing of the DMZ. Collective Punishment consists of five stories following regular cast members as this occurs.

Zee is hiding out in a basement she hopes will withstand the assault. Wilson sits in the Chinatown area he controls, having ignored a chance to clear out before the bombing begins. Amina has found an abandoned baby. Decade Later is dumped back into the DMZ, and so is Matty Roth.

Up until this point self-contained stories haven’t been the highlights of DMZ, but Brian Wood really pulls it together here with five stories both essential to the ongoing scenario and offering an admirable variety of approach. Rather than taking the obvious path of illustrating the bombs falling, his chosen method of focussing on people is far more powerful. The bombing condemns everyone to victim status, irrespective of their past, a point made rather odiously by a character in the final chapter.

Nathan Fox illustrates the Wilson spotlight, and from a decent enough starting point his art has greatly improved. The distracting lines and clutter are gone, and here’s a more confident artist altogether, mixing his styles to vary past and present. It’s a powerful story of pride and what follows. The dank and gloomy style of Danijel Zezelj might not seem an ideal match for optimistic street artist Decade Later, but then this is a dank and gloomy Decade since his capture. When the story opens out, though, it’s a glorious celebration of the power of art to inspire. If that sounds sentimental, it’s not a sentimental story, but Amina’s is, or as near as DMZ skirts to any kind of sentimentality. Formerly tragic and lost, Cliff Chiang illustrates character on the road to salvation in far more positive manner than when previously seen.

Zee’s experience is illustrated by Andrea Mutti, but the focus is more on a soldier dropped into the DMZ and what he’s done. Kindness and understanding has a far more devastating effect on him than the brutalities he’s committed, depicted in an interesting manner by Mutti and colourist Jeromy Cox. Roth’s chapter occurs in another bunker, and he’s seeking a form of redemption he’ll never achieve. David Lapham’s artist for this one.

At the end of Collective Punishment the status quo has again vastly altered, which is a trick Wood has become increasingly smart at pulling off throughout the series. It continues with Free States Rising. This book also forms part of the fourth hardback volume of DMZ Deluxe Edition.