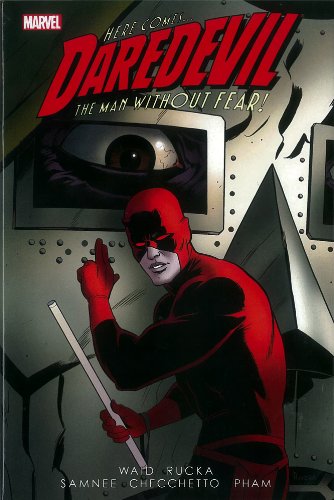 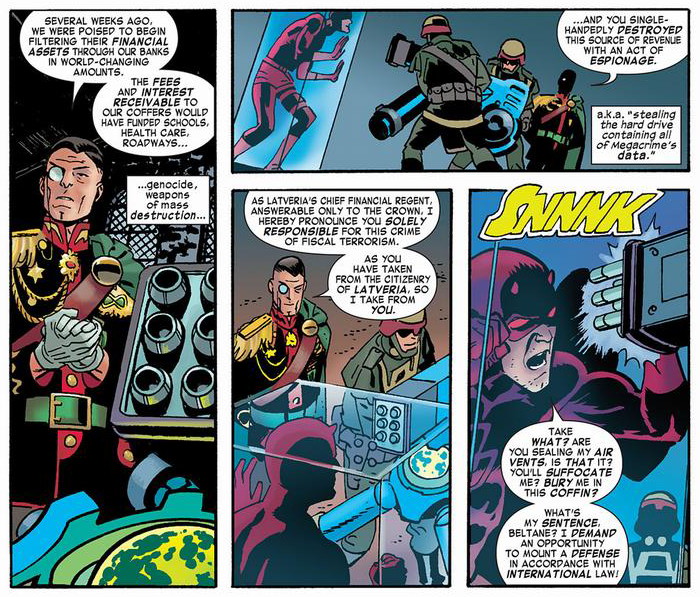 It might have been assumed that Mark Waid’s spirited revision of Daredevil had been dealt a fatal blow when the pair of excellent artists that defined the look both bowed out. Well, the good news is that, after a brief settling in period, Chris Samnee instead became the artist associated with the series.

That settling in period is within these pages as Samnee’s own style has a greater cartoon element to it, most obviously influenced by Michael Allred (who draws a chapter in volume 4). His storytelling, though, is exemplary, and Waid provides some good material, with a tale set in Doctor Doom’s kingdom of Latveria a series highlight. Khoi Pham is back from the previous volume, his art again detailed and professional.

Before that there’s a three-way crossover involving Daredevil, Spider-Man and the Punisher. And the Punisher’s apprentice, which is important. The connection occurs via the Omega Drive, currently in the possession of Daredevil/Matt Murdock, but deemed a desirable acquisition by many others as it contains intimate details of assorted criminal and terrorist organisations. The Punisher can see obvious advantages for his war on crime, whereas Spider-Man’s view is that the Punisher’s the last person to whom it should be entrusted. Waid and writing partner Greg Rucka twist and turn the plot, and the sequence benefits from having a single artist, Marco Checchetto, across all three chapters, rather than the jarring switches that occurred in the previous volume’s crossover.

The looming face of Doctor Doom on the cover is actually some sleight of hand, as despite Daredevil being abducted to Latveria, Doom actually plays only a minor passing role. It’s one of his functionaries who holds Daredevil responsible for financial losses incurred, again tying in with the Omega Drive, which by this time has been nullified by a rather ingenious method. So has Daredevil, and that’s not rectified until the following collection, which leaves him attempting to escape a resolutely hostile country while impaired. It’s a thriller.