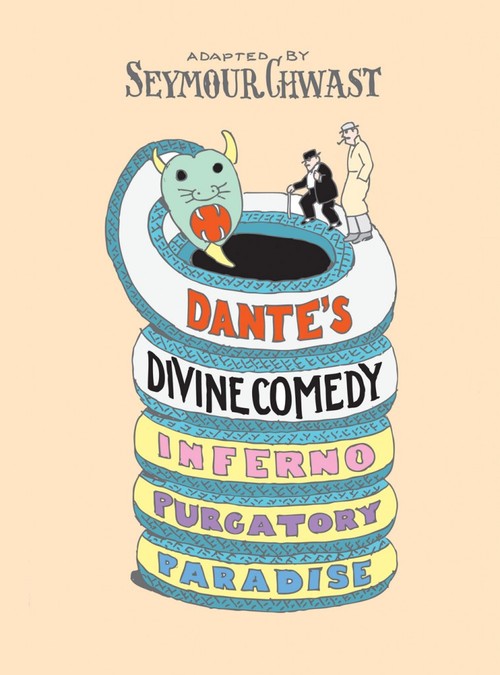 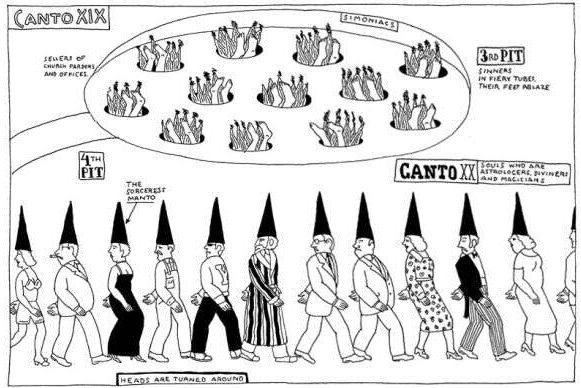 14th century poet Dante Alighieri wrote a tangled poetic trilogy placing himself at the centre of the narrative as he journeys first through the assorted levels of hell (Inferno), then among those awaiting ascension to heaven (Purgatorio), and finally ascending to the beauty of heaven itself (Paradiso). He’s guided first by dead poets, then by the deceased love of his life, Beatrice. It later became known as The Divine Comedy.

One must start with the proposition that if Seymour Chwast doesn’t love Dante’s work he at least admires it, otherwise why embark on adapting something so resistant to the process? Yet if that’s the case why would he want to contract Dante’s trilogy to 118 pages, diluting the complex cantos down to the most basic text, excising the beauty altogether?

Chwast’s design work is innovative, iconic and influential, but the style and wit he applies to that material is almost entirely absent here. Updating Dante to a trench-coated, pipe smoking guy in hat and shades, and providing his guide, the Greek poet Virgil, with a bowler hat, spats and a cane is an amusing whimsy that dissipates almost instantly. This may be an attempt to recast them as Hercule Poirot and Captain Hastings as they unravel the divine mysteries in detective fashion. Or it may not.

The reductive nature of the text is equally applied to the art, which employs stark black and white and the simplest of styles. So simple, in fact, that’s it’s off-putting, resembling nothing so much as the flat, primitive animation of 1960s UK kids cartoon Mr Benn. Even acknowledging the difficulty of comics storytelling in the circumstances, the picture worth a thousand words method fails, as Chwast makes little attempt at continuity, relating Dante’s journey as individual images. The more appealing moments occur when his innate sense of design shines through, but the unsuitable nature of Chwast’s chosen style is dragged horribly into focus in the final section. Dante’s original work made much of his struggle to convey the glory of heaven, and whatever visuals he had in mind, they surely weren’t simplistic, detail free representations that could have been drawn by a talented ten year old.

Two years later Hunt Emerson and Kevin Jackson would issue their adaptation of Dante’s Inferno, which is an altogether more satisfying work.