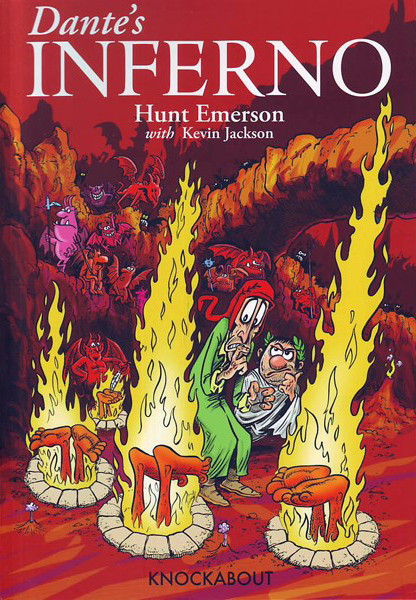 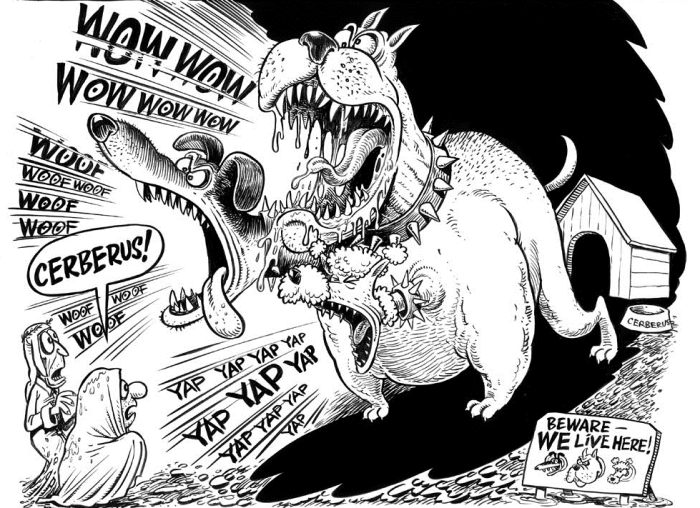 Hunt Emerson has previous for tackling the literary classics, with a freehand adaptation of both Lady Chatterley’s Lover and Casanova’s memoirs, and here he disembowels the first portion of Dante’s 14th century poetic trilogy. The wonder is that he, and scripter Kevin Jackson, remain faithful to the intent of the text while thoroughly undermining it illustratively.

For those not subjected to Dante’s work at school, the author places himself at the centre of the narrative as he’s guided on a journey through the assorted levels of hell by the ancient Greek poet Virgil. The story is an allegory, detailing the first part of the passage that has to be taken by the soul in order to reach God, who’s oddly represented by Dante’s deceased first love Beatrice.

What with the illustrative likes of Gustave Doré associated with the work, Emerson is following in acclaimed footsteps, but he’s produced a unique and lingering adaptation. Dante didn’t shy from the crude in his descriptions, and neither does Emerson, producing a ruggedly earthy version in his adaptable cartoon style, peppered with the familiar. Many will be delighted to see Margaret Thatcher in hell, but a harpy with a disturbing resemblance to Minnie the Minx may cause lingering nightmares. Among other highlights are one of Cerberus’ heads being a poodle, Dis as Gormenghast, assorted demons displaying a gleeful pride in their work, an invitation for suggestions to replace those in the jaws of Satan, and a group of classical poets delivering bawdy limericks.

The comic bathos throughout is masterful. Take the doors to hell, for instance. Traditionally rendered as towering, flame encircled portals, here they’re depicted as old style church doors, complete with welcome mat, a letterbox stuffed with takeaway menus and empty milk bottles outside. Yet that’s just the lower portion. Above they metamorphosise into a Rick Griffin style 1960s band poster. Emerson mixes his comedy, puns nestling alongside visual jokes, anachronistic references, breaking the fourth wall, and Carry On‘s Kenneth Connor asides, yet according to Jackson, who ought to know, it’s a remarkably faithful adaptation for all that.

In an any righteous society Emerson would be revered as the greatest British cartoonist of his era, and reaping the rewards accompanying that status. He’s consistently visually inventive, and this adaptation is a masterclass in transferring what to many would be a dry and inaccessible work into a book anyone can love and cherish. It’s particularly heartening after the bone dry reduction of Seymour Chwast’s 2010 adaptation.

Jackson concludes the book with an informative essay explaining his love of the work, the historical context and assorted references, including why the scatological sequence about Muhammed has been omitted (common sense).