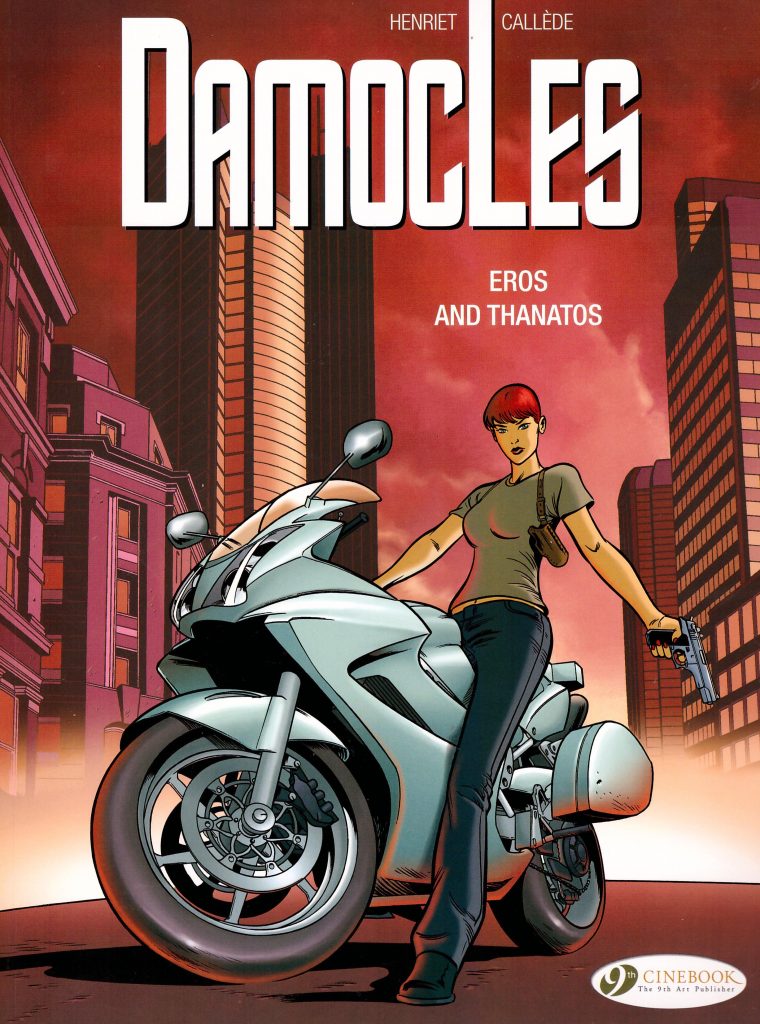 The subtitle featuring the names of the ancient Greek gods of love and death is an indication of where the plot heads here. The first surprise is that Damocles isn’t a continuing series of two-part thrillers in the manner of Largo Winch, but a finite series consisting of two stories overall. This continues from Perfect Child and its shock ending, and we discover Joël Callède has rather pulled a fast one. In terms of the thriller elements it’s his only mis-step, but taken over the entire four albums his presentation of the characters lacks credibility.

Ellie Braxton has been characterised as an efficient and capable bodyguard, and we learn early why she chose her career. It’s been established that she’s having some problem coping with the pressures of the job, and in Perfect Child she had a one night stand with a fellow agent who’s infatuated with her, and had taken steps that could be construed as stalking her. That plot develops here, and in today’s climate that a woman would suddenly change her mind and enter into a relationship with him is bordering on offensive. Callède’s other mis-step is a sub-plot about a bishop stirring angry fanatics to action. There’s a brief confrontation, but it’s anti-climactic.

Most of the remaining plot is good. We learn the CEO of a company offering designer babies is under considerable pressure, and if her character wasn’t already ethically compromised, new information seals that perception. It involves a weakness exploited by Russian gangsters leading into the story’s action segment, and that delivers in full because artist Alain Henriet is fantastic. He seemed to be coasting slightly on the previous book, but he’s back to his best for the finale, with lush background detail complementing exciting page layouts and strong visual characterisation. He is, however, a couple of decades behind the times when it comes to the buses currently seen on London streets.

Enough minor dangling plot threads ensure the door is left open should either creator wish to return to Damocles at a later date, but both are currently working on other projects, and have been for some time. Overlook the unlikely relationship and over two stories Damocles provides solid action-thriller entertainment.