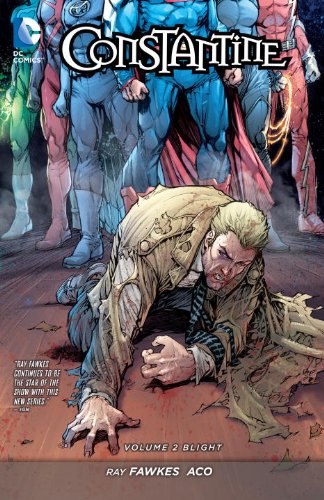 What an aptly named volume. Is it a form of commentary from writer Ray Fawkes?

Does the fact that you’re only getting half the story when you buy some DC collections post 2011 fill you with enthusiasm and a compulsion to rush out and buy a few more DC books to fill in the gaps? Or do you consider that DC must believe you to be a complete mug, and if they can’t be bothered to provide a complete story in a single book (continuations allowed) then why would you want to buy that book in the first place? Your choice will colour your response to Blight.

The Spark and the Flame concluded with magical cult the Cold Flame breaching the defences Constantine had set around his sanctuary and removing all his magical artefacts and accoutrements. The discovery sends Constantine into paroxisms of self-pity of a fashion unknown for the character, not least because it endangers the few remaining friends and allies he has. At least this occurs for a page or two, then he’s back to his usual supercilious personality.

The opening chapters continue directly from the opening tale, and while hardly prime John Constantine, at least they’re following the previous events. Aco proves to be a decorative and dynamic artist, the gloomier style of Szymon Kudranski also slots well into Constantine’s environment and Fawkes supplies a competent and manipulative lead, once past his wailing session.

Then, though, we’re into crossover central, where following the story requires dipping into Forever Evil, Justice League Dark, Pandora and possibly other titles to boot. Every successive chapter presented from this point has moved on several stages with no explanation. Briefly the major magical entities from this new DC universe set about each other, God is portrayed as a cuddly Yorkshire terrier, and there’s a desperate battle to save Zatanna. The best aspect of all this nonsense is Beni Lobel’s art. Some expressions are stiff (the curse of photo reference), but he has a sense of scale and occasion.

Be warned as well, that even if you feel you can put up with all the above for your Constantine fix, there’s no conclusion here. We’re back on track with the Cold Flame plot in The Voice in the Fire.