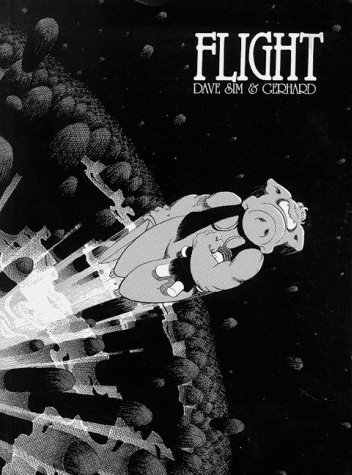 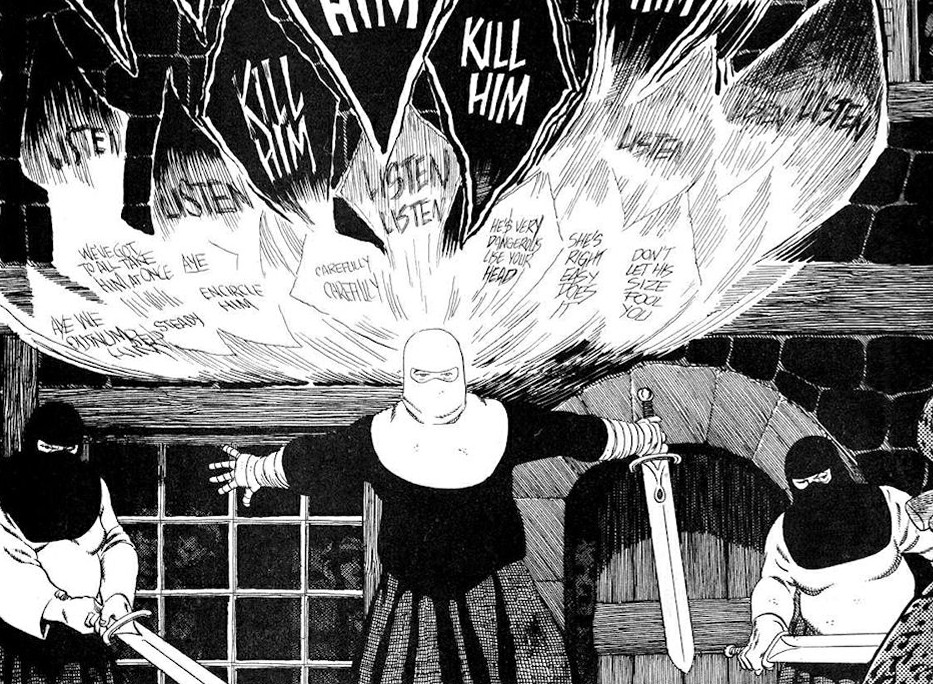 Flight is the first of four volumes that make up Mothers & Daughters (the other three are Women, Reads and Minds), and, after Jaka’s Story and Melmoth, in which Cerebus barely featured, we’re back with the aardvark, picking up once more on the storyline from Church and State.

At the end of Melmoth, Cerebus, having being almost comatose throughout the entire book, went postal, attacking and brutally killing a bunch of Cirinists. The Cirinists are the villains of the piece: ultra-traditional, matriarchal, Pro-Life feminists who believe that motherhood is all. The Pro-Choice Kevillists, on the other hand, while also feminists, believe in the empowered individual. Both represent two pernicious aspects of woman. Oh, and the Cirinists have a hive-mind and are controlled by Cirin, who is the second of three aardvarks in the world (Cerebus being the first).

Cerebus leads a brief uprising, which the Cirinists put down brutally, at least until PunisherRoach appears. Artemis Strong and his Roach-like superhero parodies have long been a staple of the title, providing much-needed light relief. His pearl-handled semi-automatic hand-held crossbow-bolts go through the Cirinists like fat through a goose, and the situation is only defused when the fickle Roach falls for a prostitute.

The Cirinists can’t find Cerebus. Why? He’s vanished into thin air and is soon zooming through the atmosphere on his way to the Seventh and Eighth Spheres, where he discovers the identity of the third aardvark. Their significance is that they all act as ‘magnifiers’, with historical events revolving around their actions. Which they’ve all played out over and over again, with different characters assuming different roles each time around. Cerebus has always dealt in this type of thing, and is forever ascending to the moon (see Church and State) or having astral conversations with Suenteus Po, a philosopher whose teachings were partly responsible for the mess in which they now find themselves. These happen while Cerebus is unconscious, asleep, drunk or bewitched, and Sim clearly enjoys them, as it lets him hold forth at length while drawing bizarre scenarios with Cerebus flying along like the Silver Surfer.

Sim can do pithy well, especially with Cerebus, but the subject matter lends itself to prose that often strays towards purple. The story is well constructed, and it’s clear that Sim has given all of this a great deal of thought, with the world-building convincingly authentic. The artwork is also very polished, with both Sim and Gerhard old hands by this stage. Page layouts are rarely dull, the lettering is excellent (think Will Eisner on steroids), and the craftsmanship is both apparent and impressive, with Gerhard’s backgrounds often painstakingly detailed and outstanding.

It’s no surprise this book caused a shit-storm when it came out, and it would only get worse with later volumes. Many feminists accused Sim of misogyny, and both sides entered into heated and pointless debates. So, if you’re a feminist, you’re really probably not going to enjoy it, and readers who can see past that still have to struggle with a book that explores metaphysical and spiritual matters with a depth that’s unusual for a comic. Too mature for its intended ‘mature’ audience, too esoteric, or just too misogynistic?