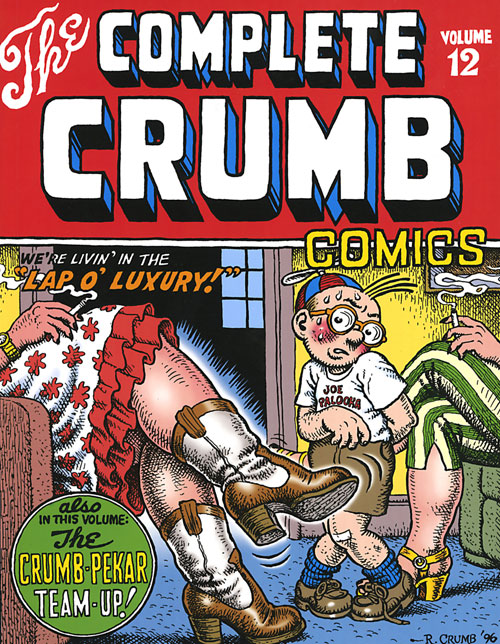 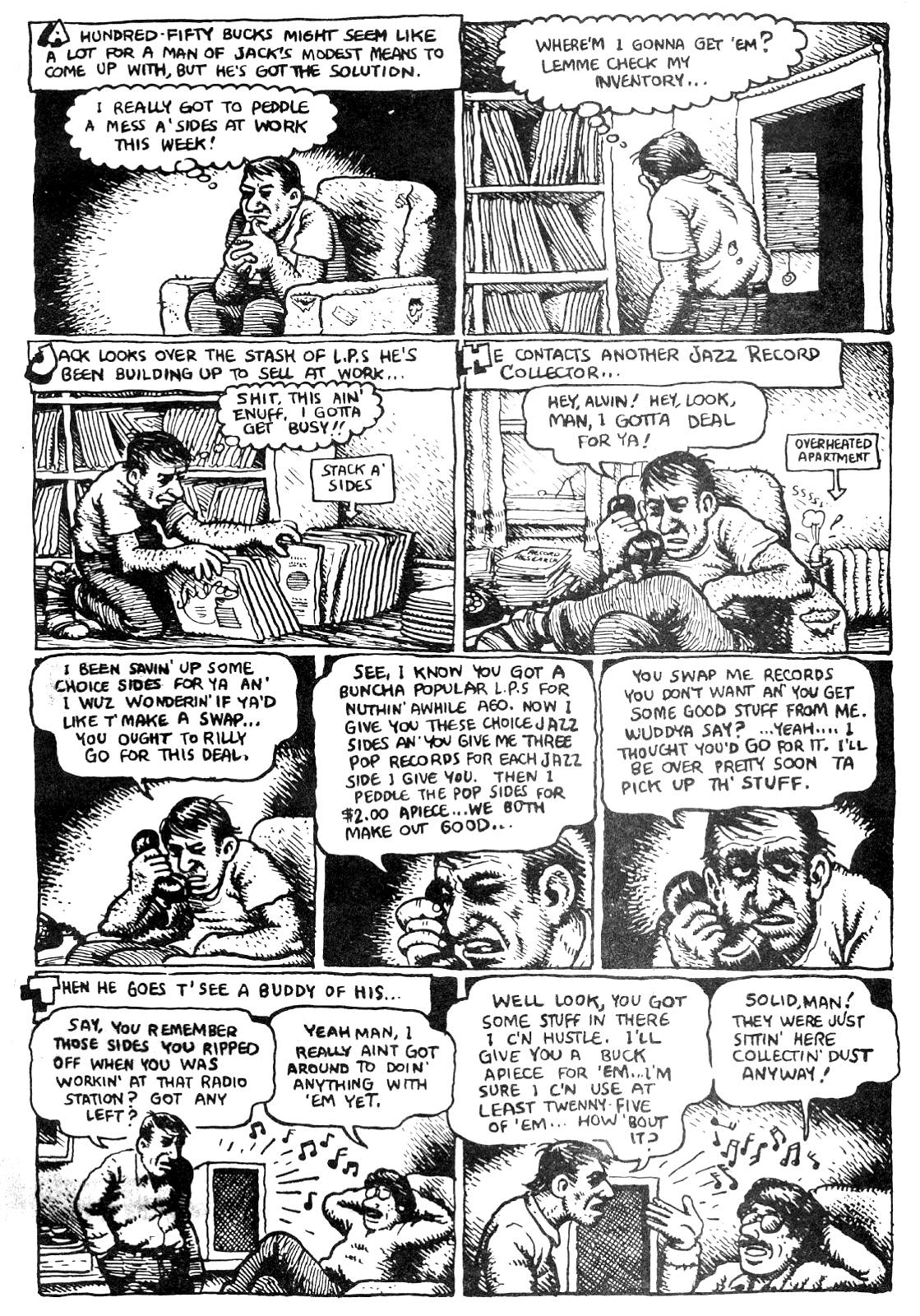 Robert Crumb is one of the most outstanding stylists in American comics, and the majority of the material here comes from the CoEvolution Quarterly and American Splendor, drawn between late 1976 and 1979. Fantagraphics’ edition of Crumb’s complete oeuvre tries, as far as possible, to group material sensibly while following a chronological format, and in this volume you have the pleasure of reading several years of his contributions to American Splendor in one sitting.

American Splendor was an early autobiographical comic, self-published by Harvey Pekar, about his life as a menial office clerk and a keen record collector. Much of his material was crafted around casual but often quite surreal conversations he had with his co-workers, or tales of record collecting that often didn’t show him in a terribly good light. Pekar had a group of artists who illustrated his stories in each issue, but Crumb stood out as the superstar, capturing every grouchy wrinkle and slouched line of Pekar’s character effortlessly.

In the preceding two collections there are a handful of still, small stories, some without words, that point towards the direction Crumb was taking during this period. Freed from writing and plotting, and with a fresh, grumpy perspective to communicate, he created some fantastic work with Pekar. His line, his structure, his panel layouts all act in harmony to tell the simplest of stories beautifully. And there is a welcome discipline in working to someone else’s script that took him back to small, regular panel layouts and carefully-modulated line weight. ‘Standing Behind Old Jewish Ladies In Supermarket Lines’ and the strips featuring Pekar’s co-worker, Rollins, are particularly good examples of their collaboration but there are half a dozen wonderful stories in the collection for aficionados to pore over.

Pekar and Crumb met several years earlier thanks to their interest in old vinyl. Pekar’s completely fresh and confessional (to the point of portraying himself as a cheap, mean, thieving, miserable) take on producing comics aligned with both the material Crumb had been producing with Aline Kominsky, and the stories of old bluesmen dotted among his earlier work.

In among the American Splendor stories are a scattershot collection of generally short strips produced for the CoEvolution Quarterly. Although Crumb seems to be toning down some of his crowd-baiting tendencies they nonetheless shocked some of the readership. Many of the strips don’t quite hit their target or lack real bite, such as the Patricia Pig story about the vapidity of shopping or ‘Maybe We’ll End Like This’, in which enlightened aliens put down the last few degenerate specimens of the human race. There is a real feeling that the last ounce of 1960s zaniness and psychedelia is being squeezed out by the artist to satisfy a die-hard audience in strips like ‘Grim Grids’. One peculiarity is a new character, Mr Appropriate, produced for a local counter-culture magazine, about an entirely reasonable eco-warrior who responds passionately but sensibly to threats to mother earth. Full of left-wing rhetoric, as you read the stories you keep waiting for the satirical shoe to drop, but it never does… they’re just nicely drawn, warm-hearted polemics.

Volume 12 of The Complete Crumb Comics is inevitably patchy, as are pretty much all of the preceding ones, but here you do get the virtue of seeing work that was spread over many irregular issues of American Splendor brought together in one place. And what fine work it is… Alternatively, the entirety of these collaborations can be found in Bob & Harv’s Comics.