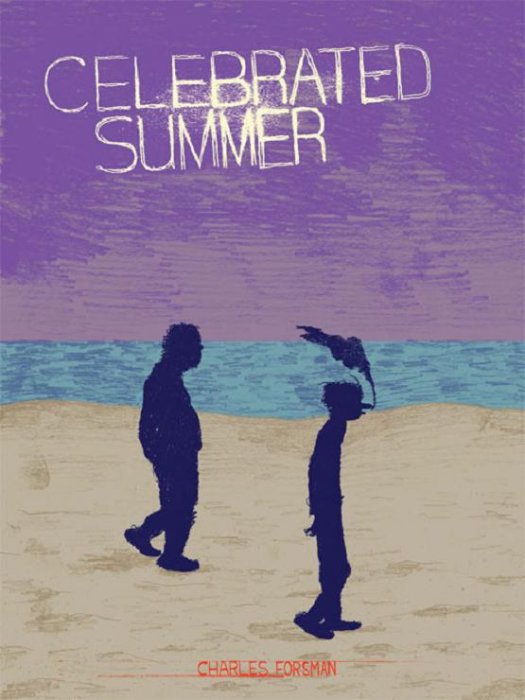 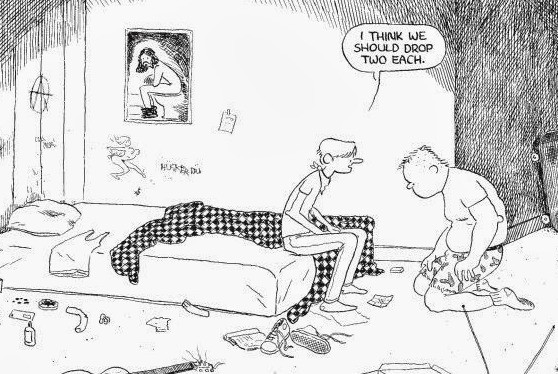 Celebrated Summer is a trip in both senses of the word, and paean to shyness and the awkward loner. Although very simply drawn and deliberately lacking much emotional expression, it positively drips with heartfelt sadness. This should come as no surprise to those who’ve read Charles Forsman’s previous work TEOTFW.

These are the late teenage years of Wolf and Mike, those often considered with the rosy glow of nostalgia later in life, yet at the time the prevailing feeling is the ennui of wandering without purpose, a focus not yet acquired. Despite being a big guy Wolf is very much the subordinate in his friendship with Mike, seemingly more at ease with his surroundings, and a bit of a dick. As we see, though, when thrown into a situation requiring a modicum of the personality he projects, Mike runs scared, at his core no more confident than Wolf.

The book opens with the pair about to drop acid tabs, and as they undertake a road trip we experience their perceptions along with them, a video game proving the final immersion. It’s from Wolf’s viewpoint that we undertake our trip, and eventually discover that despite Wolf has a reason for his passive personality.

Artistically Forsman’s influences appear derived from newspaper strips. Peanuts, Doonesbury and, strangely Hi and Lois are all in his mix, though thankfully he has more to say than the latter. The style, though, adapts surprisingly well to the experience of tripping, cityscapes rippling in the light, and the mundane providing magic, although these moments are passing.

An interesting aspect is that the trip ultimately has little effect on either Wolf of Mike beyond the transitory. That this comes as a surprise possibly says much about the proselytising nature of most fiction regarding mind-expanding drugs. Much of their experience is internalised, symbolised by Wolf’s inability to take a leak all day, and Mike’s feeling of travelling in a big circle is surely an indicator of how time passes for them without dropping tabs.

The sad final pages accentuate the differences between Wolf and Mike. Wolf’s internal anger stems from a sense of loss as he has responsibilities Mike lacks, and there’s already an awareness that his loss isn’t final. Celebrated Summer is very sharply observed, and Forsman a talent to follow.