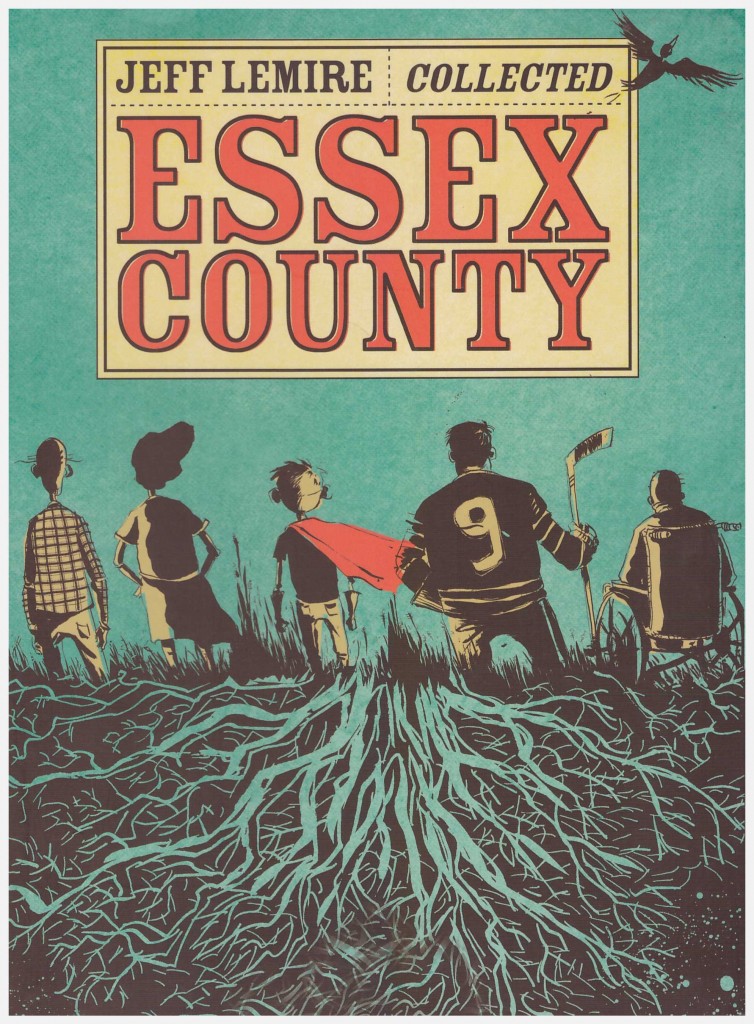 Jeff Lemire originally released the three chapters gathered here as individual volumes titled Tales from the Farm, Ghost Stories and The Country Nurse. Together they’re an ambitious work detailing the history of some Essex County residents from the late 1800s to the present day.

Essex County is an isolated farming community in Southern Ontario, and Lemire emphasises the great open spaces to underline the loneliness of individuals throughout his trilogy. Each of the cast is struggling, and each has suffered loss, be it someone close or a career. Lemire is particularly adept at implying melancholy, either with his excellent pacing where silence often prevails, or via the sadness or lack of understanding he etches on a character’s face.

There’s little joy in any of the lives detailed. Ten year old Lester is orphaned, and immerses himself in the wish-fulfilment of superhero comics, drawing his own in which he rights the world, and perpetually wears a cape and face mask. He’s been taken in by his single Uncle Ken who struggles to relate to a child and cope with the harsh demands of working his farm. Jimmy Lebeuf could have been a major league ice hockey star, but suffered a career-ending injury in his first game that’s left him slightly brain damaged. His Uncle Lou also played hockey, but is now a deaf old man experiencing dementia and his life has been a void for fifty years. Widowed nurse Anne Quenneville attends to her patients wondering if she really makes any difference, while decades previously her grandmother compromised her principles.

It shouldn’t be inferred that such a catalogue of misfortune and sadness renders Lemire’s work little more than a misery memoir. This isn’t the case. With only one previous graphic novel behind him when he started work on this trilogy, he’s astonishingly adroit at revealing character through small moments, of honing in on how cracks become chasms and how silence can sometimes scream. There’s an emotional maturity on display way beyond what the experience of youth would suggest.

Of the three chapters it’s the opener that’s the best, beautifully observed and constructed, rendering the continuation of sorts in the final chapter somewhat redundant and disappointing. That final chapter is the weakest, with a wandering narrative in which the title character is largely but a conduit to others.

In addition to convenience, the possible reason for buying this collection in preference to the individual volumes is the presence of two additional stories running to more than thirty extra pages. Originally meant to tie into the earlier material, they were discarded as that was modified, and eventually saw print as mini-comics. Neither is essential, but it’s the tale of Eddie Elephant-Ears that has the closest ties. Released from hospital after twenty years in a coma, he was excised from The Country Nurse, and his hospitalisation can be traced back to an incident from Ghost Stories. The tale of the Essex County Boxing Club has the same charm permeating the remainder, but is a slimmer piece.

Lemire’s triumph is to create an enclosed claustrophobic world from vast wide open areas. The sadness of his cast resonates, and his blocky art appears simple, but conveys complexity. The Essex County stories remain relatively obscure, and deserve wider appreciation.