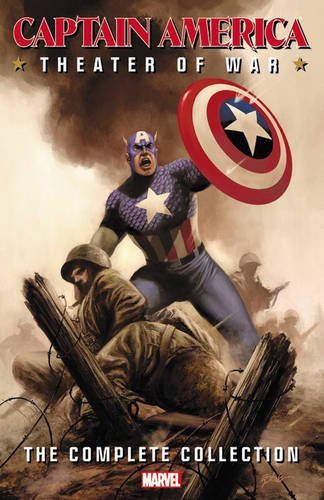 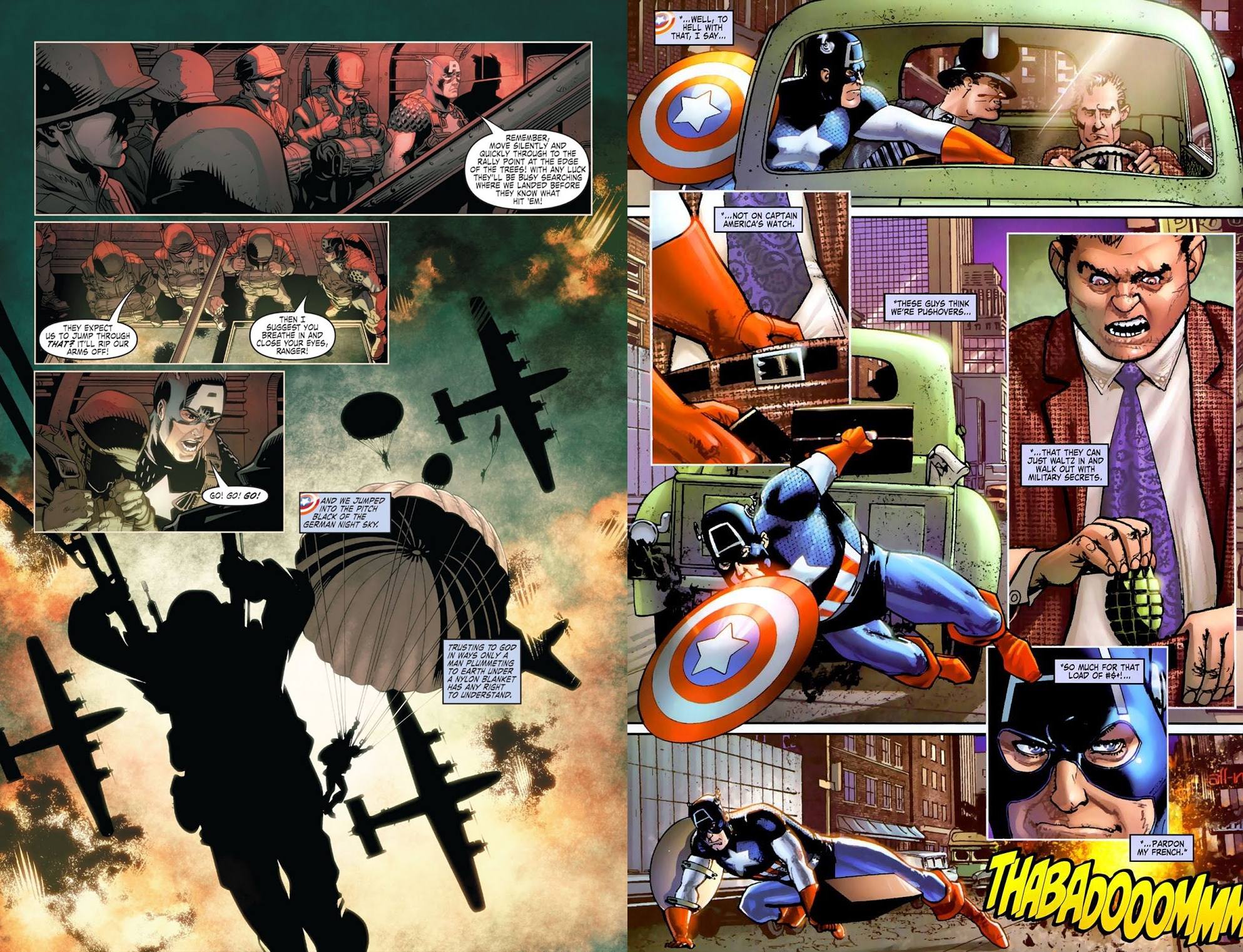 Theater of War collects seven stories about Captain America during wartime, four occurring during World War II, a Cold War escapade, one set during the first Gulf War and one taking a trawl through assorted wars with American involvement over the centuries.

That’s the weakest of four stories written by Paul Jenkins, who over-eggs a simple idea about Captain America as a timeless inspiration at pivotal moments, and some of Elia Boneti’s illustrations of a ghostly Captain America hanging over the battlefield are tacky, not mournful. Jenkins’ other stories are far better because he humanises the conflict. Gary Erskine’s good at showing the terror soldiers must have felt during the Normandy beach landings in 1944, one of them the incompetent Bobby Shaw in a warm tribute. A Gulf War soldier is spotlighted, drawn by Fernando Blanco in super-realism, and Jenkins here sets up an interesting scenario of resentment amid an eye-opening lesson about the recovery process for severely wounded soldiers. There are no easy answers, and Jenkins is respectful enough concerning those who’ve experienced it not to supply one. A captured German features in his best story, suspenseful and thrilling World War II action as Captain America inspires troops trying to hold a bridge. That’s wonderfully drawn by John McCrea (sample art left) in a form of realism a long way removed from his recognisable cartooning.

Jenkins largely uses fictional situations, but two other writers apply thinly disguised variants of reality. A stand-in for Senator Joe McCarthy is seen in Howard Chaykin’s story, which at first appears cowardly, but there’s a reason for not naming the genuine article, and Chaykin writing and drawing (sample art right) supplies an interesting meditation on a different Captain America. The writing team of Kyle Higgins and Alec Siegel take a look at Colditz, castle, prisoners and town loosely brought to life by Agustin Padilla. Circumstances dictate the lack of a costume, but it’s standard material.

More troublesome is Charles and Daniel Knauf’s interpretation of Captain America. “Two days ago I’m hauled off the front lines to meet with some boobocracts from the Office of Strategic Services”, they have him thinking, later continuing “bet old Fleischer’s got a bridge in Brooklyn to sell too, and the boys in O.S.S. would probably buy two of them”. Does that cynicism sound like the voice of Captain America? The writers continue imposing their own personalities over another 36 pages, and it rings continually false. Their story is one of cinematic action, predictable, but nicely drawn by Mitch Breitweiser. The uncharacteristic narrative captions leave a sour taste, though.

Due to Chaykin, three good Jenkins stories and some evocative art, Theater of War manages to hover above average, but don’t expect gold all the way through.