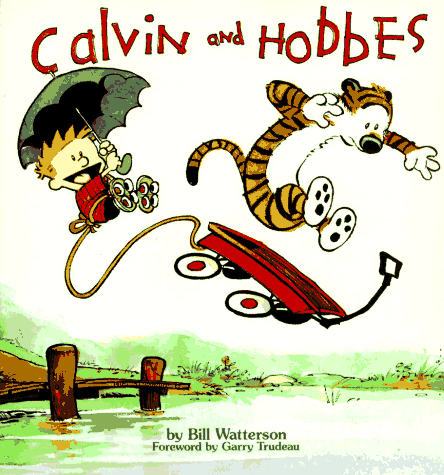 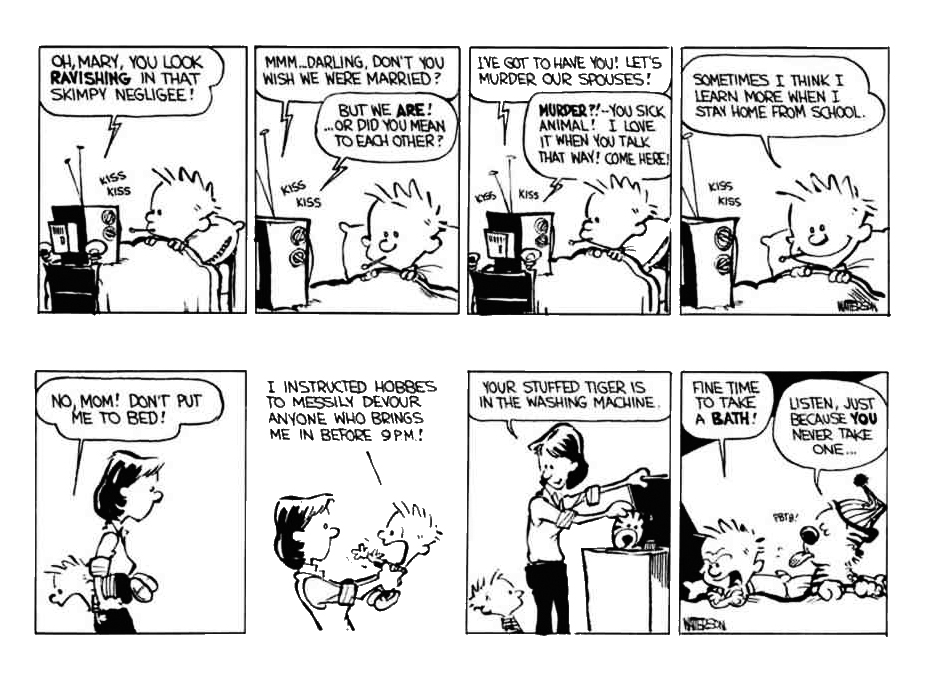 This is the first collection of the newspaper strip by Bill Watterson that features Calvin, a six year-old boy, and his stuffed tiger, Hobbes, who comes charmingly to life. Calvin and Hobbes was first syndicated in 1985 and became massively popular. It was appearing in more than 2,400 newspapers worldwide by the time Watterson decided to end the strip and published the final Sunday page on January 1, 1996.

Calvin and Hobbes is primarily a strip about the power of imagination. Calvin, like many cartoon children, is a child who seesaws between fiercely intelligent, philosophical musings on the meaning of life and his relationship to the world, and infantile delight at breaking things, running amuck, pelting other kids with snowballs and generally expressing himself in the loudest, most demonstrative ways. What makes this funny is that he does all this through the most intense playacting with his stuffed toy tiger, Hobbes, who transforms into a real tiger (or rather, a friend who is also a tiger) when nobody is looking.

As the strip progresses, the nature of Hobbes’ reality becomes a key question that Watterson presents for readers to wonder about. If Hobbes only exists in Calvin’s imagination then how does he manage to surprise Calvin? How does Hobbes know so much about things that Calvin is unaware of? How can an imaginary being get the better of a real person? The constant switching between the world as Calvin sees it and the ‘real’ world as perceived by his parents, schoolteacher and other children provides a lot of the humour in this strip as what appears to be a stable situation can suddenly flip into a completely different one, depending on who is looking.

Watterson achieves incredible range from his simple premise by focusing on characters and personalities. His drawing animates Calvin, Hobbes, Calvin’s mother and father and others in extremely expressive and very amusing ways with lots of visually surprising and energetic activity. Calvin and Hobbes is a wonderful strip to look at.

The strips in this first volume cover the first year of Calvin and Hobbes. They are also reprinted in a treasury edition, The Essential Calvin and Hobbes, that combines this volume with the second book, Something Under the Bed is Drooling, but completists should note that there are extra drawings by Watterson in this volume to even out the gaps left by the pagination of daily and Sunday strips which are not reprinted. This volume features an introduction by Garry Trudeau, creator of Doonesbury.