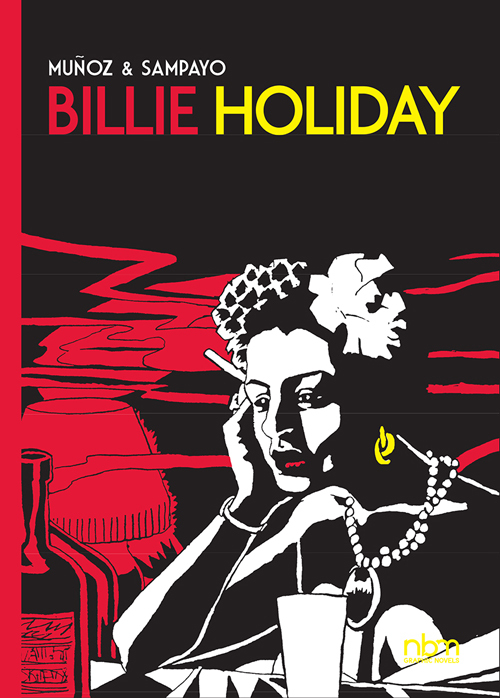 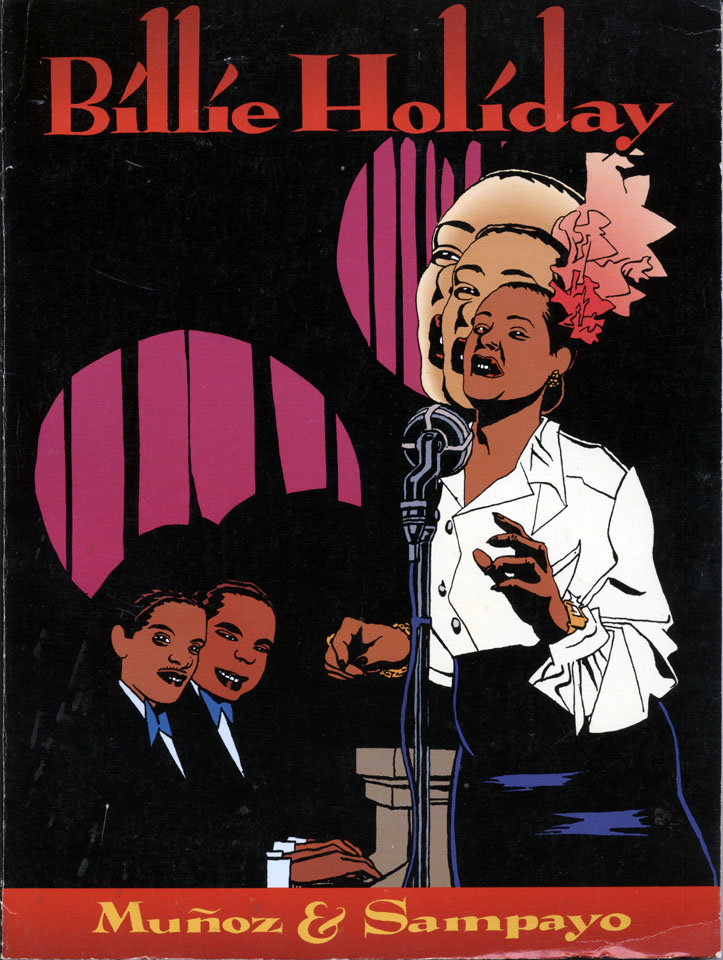 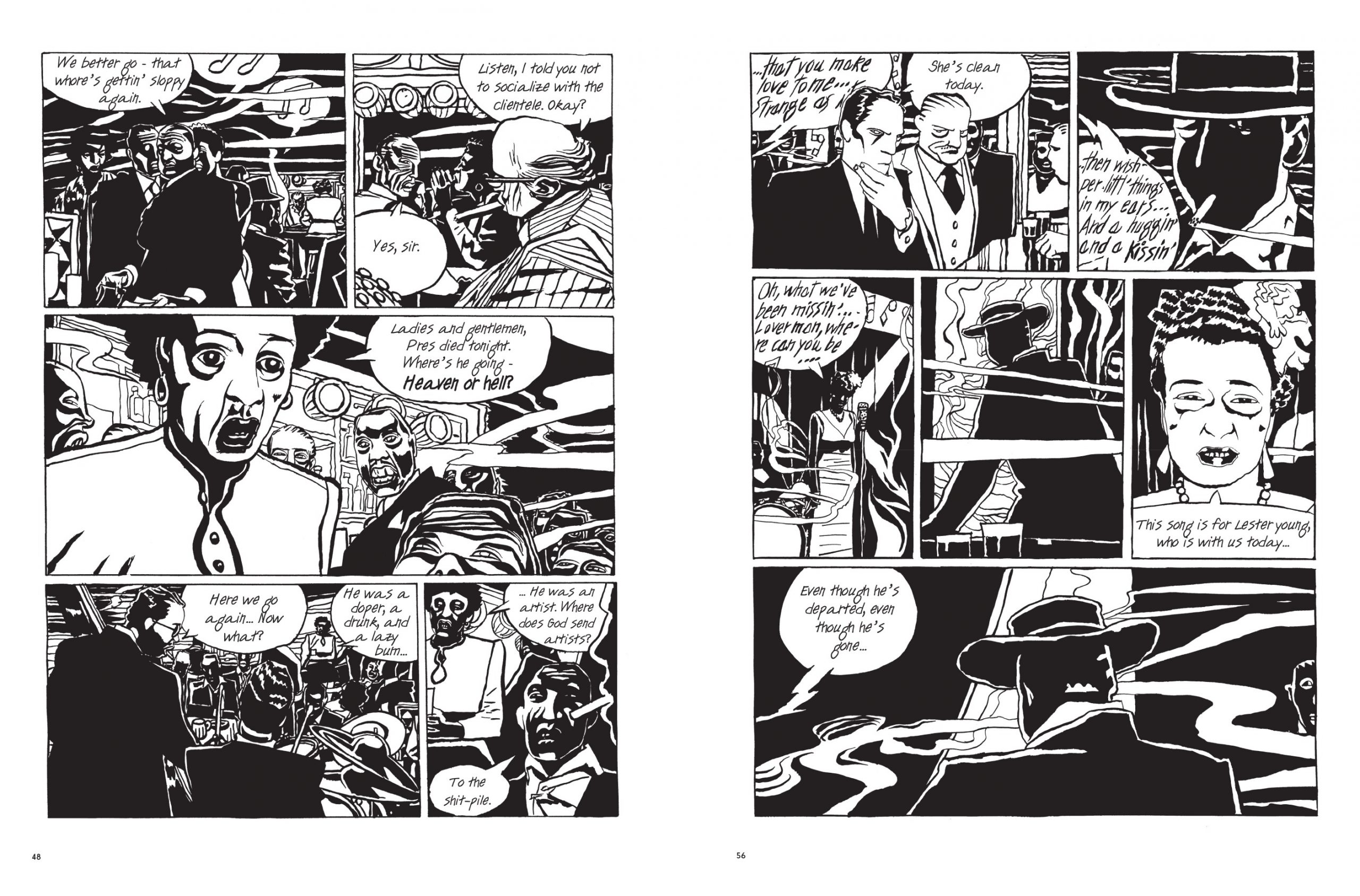 Chroniclers of urban America, José Muñoz and Carlos Sampayo are well placed to tell the story of legendary singer Billie Holiday. The duo’s long-running masterwork Alack Sinner began as urban crime noir, but evolved into something poetic and haunting, tackling political, racial and psychological themes, also central to the story of this African-American singer.

Holiday, died in 1959, so is she is still relevant today? Emphatically yes. Her ability to interpret and dramatise a song like Strange Fruit transcends time and genre. A troubled life channelled into art remains a perrennial theme, and Holiday’s experiences further reflect enduring realities for women and African-Americans, as highlighted by the Me Too and Black Lives Matter campaigns.

Argentine-born Muñoz and Sampayo are acclaimed in mainland Europe, with artist Muñoz honoured with the Angoulême Grand Prix. Yet they’ve been under-represented in English translation, with Billie Holiday long out of print until this 2017 edition, and Alack Sinner, only collected in book form the following year.

Sampayo uses the angle of a journalist researching a rush-job feature for the anniversary of Holiday’s death. This merges cinematic biography modes, combining the explanatory narration of a documentary, and dramatised scenes of a biopic. The visuals cut between the journalist researching Holiday, and his imaginings of scenes from her life, while his narration comprises both his findings “…alcoholic, drug addict, died young”, and his commentary “the tabloids emphasised those aspects of her life to the exclusion of her music”. This also flags the partiality of the account, just as in documentaries, the film-maker (say, Louis Theroux), might talk to camera about the limitations of the ‘truth’ presented.

Despite her success, Holiday’s sexual openness left her at risk in this white man’s world, and one shown incident is a boyfriend driving off in her car, leaving her naked at the roadside. If that suggests a litany of misery, it’s dealt with lightly, using understatement, implication and irony. The decline and death of Holiday’s saxophonist friend Lester ‘Pres’ Young is characterised by the journalist as “blah, blah, blah… nothing…”, yet the lingering sequence (pictured) of Billie reacting to the news is poignant, as if rehearsing her own impending death. Such irony undercuts the tragedy without diminishing it.

Muñoz has a similarly light touch. When Holiday is assaulted, he shows her from behind – reaction visible only in her body. The stark shadows of the car headlights give these panels a hallucinatory quality, creating a further distancing effect. Muñoz has been compared to the early 20th century art movement Expressionism, and he channels similarly subjective distortion, loosely gestural mark-making, and the stark black and white of the movement’s signature woodcuts. However, his emotional understatement sets him apart. His numerous achievements include a powerful sense of place. The Jazz club scenes conjure the heady atmosphere, and the Manhattan streets, Hollywood lots, and newsroom scenes are similarly vivid.

In under sixty pages Sampayo does justice to a colourful and topical life, combining a comprehensive overview, with key scenes brought to poignant life in Muñoz’ ink artistry. The duo also weave in their own visions of New York nightlife, through the journalist’s neglected girlfriend, and connections to Alack Sinner too brilliant to spoil here. Sampayo also writes Jazz criticism, so it’s odd that he too focusses on “…her life to the exclusion of her music”. Otherwise, the only caveat is that the book doesn’t shirk from the harsh realities of Holiday’s life, and that extends to the abusive treatment and offensive language she surely experienced.

The 2017 deluxe oversized hardback does justice to Muñoz’ art, adding a portfolio of jazz sketches, and an introductory essay on Holiday.