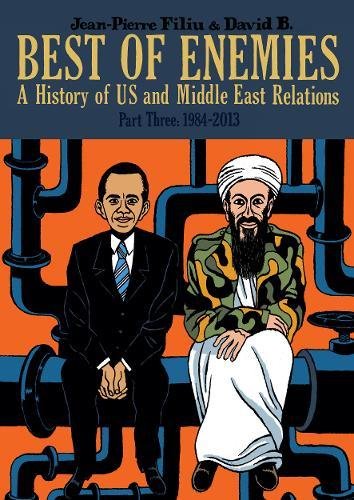 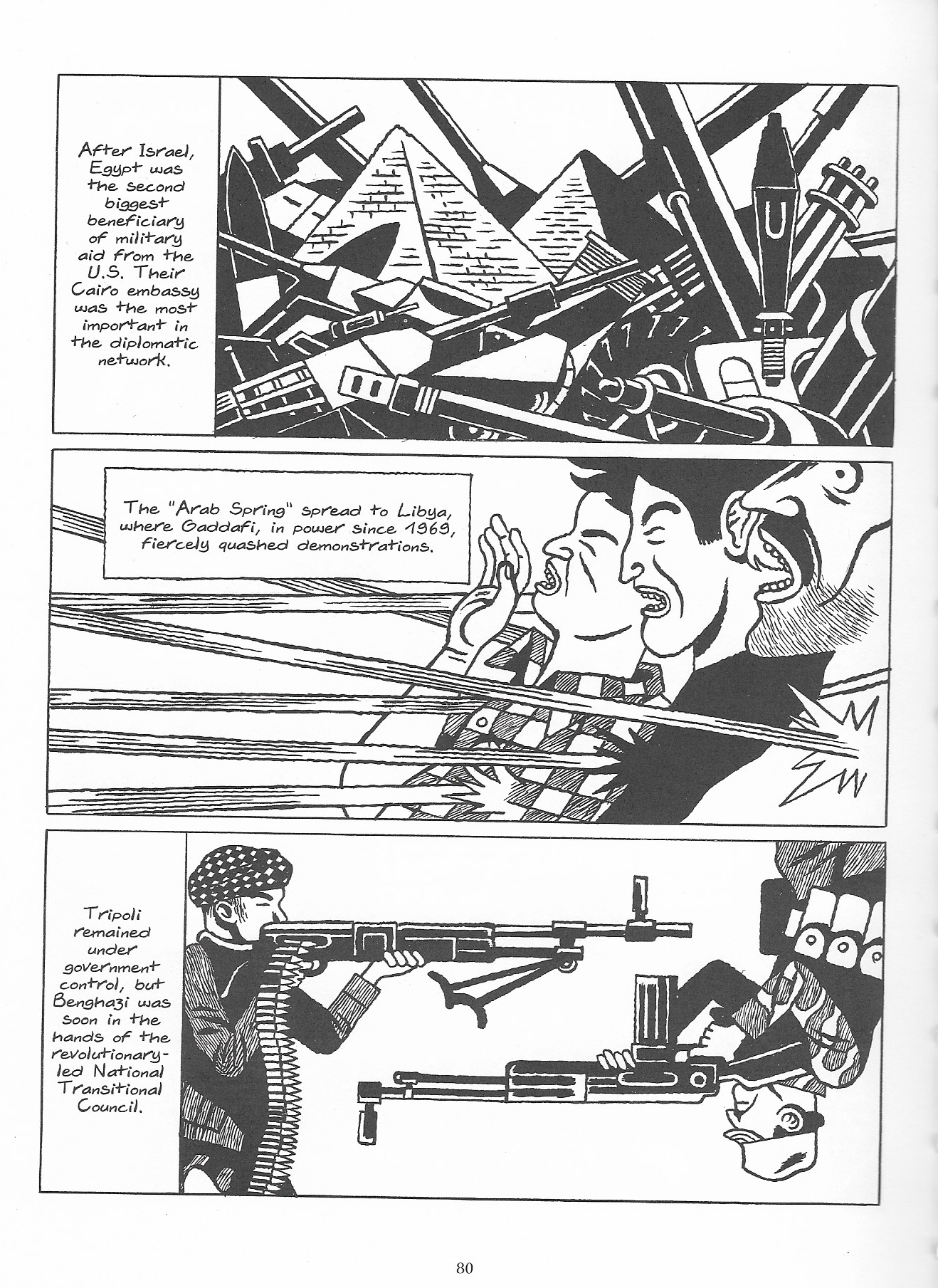 Jean-Pierre Filiu and David B conclude their three volume history of US and Middle East Relations, taking us from Ronald Reagan era 1980s to the Barack Obama years.

The first volume began in 1783 with Barbary Coast pirates preying on trading ships from the newly independent US. This highlighted the geographical importance of the region, and they later quote American naval officer and historian Alfred Mahan’s claim that “whoever controlled the ‘Middle East’ would control the world”. The ascendent US keeps a toe in the region, but doesn’t jump in until the 1950s, now a world power and thirsty for oil. The second volume covered the short but volatile few decades until the 1980s. Over these two volumes, writer Jean-Pierre Filiu and writer/artist David B (aka Beauchard) have convincingly established their authority, and ability to succinctly and powerfully communicate this in comics form.

Covering a period more readers will be familiar with, this third volume, then, is approached with high expectations. A series of complex conflicts across, and within, multiple countries – made Part Two a necessarily demanding read. Part Three, though, is able to hang the story on how some well remembered American presidents played out their politics in the region. The authors don’t flinch from uncomfortable truths about the USA and its allies, and offer some fascinating insights.

Republican President Reagan uses the region for Cold War games against the Soviet Union, and following the collapse of the Soviets, President Bush Sr casts the Islamic world as the new bogeyman. The creators’ take on subsequent Democrat Bill Clinton is fascinating. They suggest he simply continued Bush’s policies in the region, until he needed a distraction from the Monica Lewinsky sex scandal, and bombarded Iraq as his opponents at home moved to impeach him. They dismiss the “[American] propaganda” that Iraq threw out United Nations weapons inspectors, believing it a ploy to justify the bombardment. Refuting any binary narrative of Republicans as militaristic ‘hawks’ compared to Democrat ‘doves’, they argue that Clinton’s attack on Iraq actually destroyed a Bush-led ‘Pax Americana’ – relative peace in the region, and left a mess for his Republican successor, Bush Jnr. However, they do suggest that on returning the Democrats to power, Obama won support in the Arab world and kept troops out, focussing instead on destroying Al-Qaeda – the multi-national organisation that had actually declared jihad (war) on the US.

David B. talked in his autobiographical Epileptic of his cathartic pleasures in drawing battle scenes, and that’s put to good use in this series. There are no scenes of gung-ho heroism. Instead he turns the paraphernalia of war: soldiers, guns, tanks missiles, into beautiful compositions. He encapsulates conflicts and events in arresting, symbolic images: five huge gun-barrels converging on a single opposing soldier; a tiny Palestinian house and it’s owner facing a series of a colonist buildings – architecturally Brutalist, and each bigger than the last. In the ‘Monica-gate’ sequence, for example, Clinton’s nose suggests both phallus and lying Pinocchio. Then it appears on his hand as he takes an oath, a Republican tries to a saw it off, and Clinton measures it against prospective foe, Iraqi leader Saddam Hussein. Beauchard’s equally adept at recognisable, and only mildly caricatured likenesses of the large cast. It’s hard to imagine any better artist for this.

This final volume does exactly what it says with impressive clarity, and the images linger in the mind. It’s a master class of it’s type – the expository documentary. It’s only the perhaps limited appeal of the subject that prevents award of the full five stars.