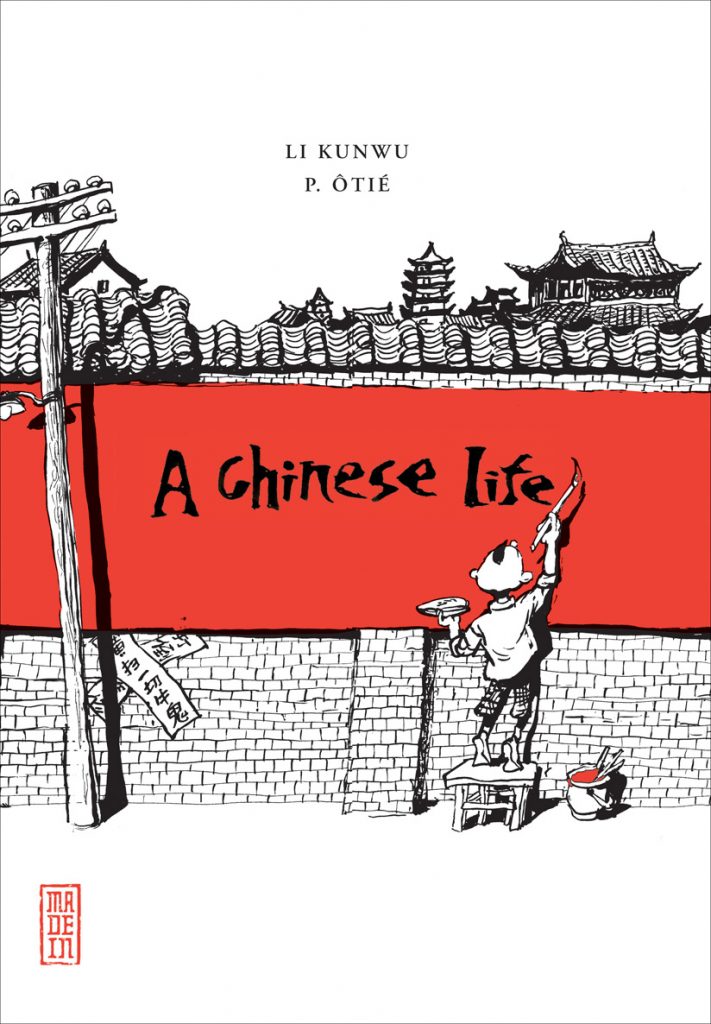 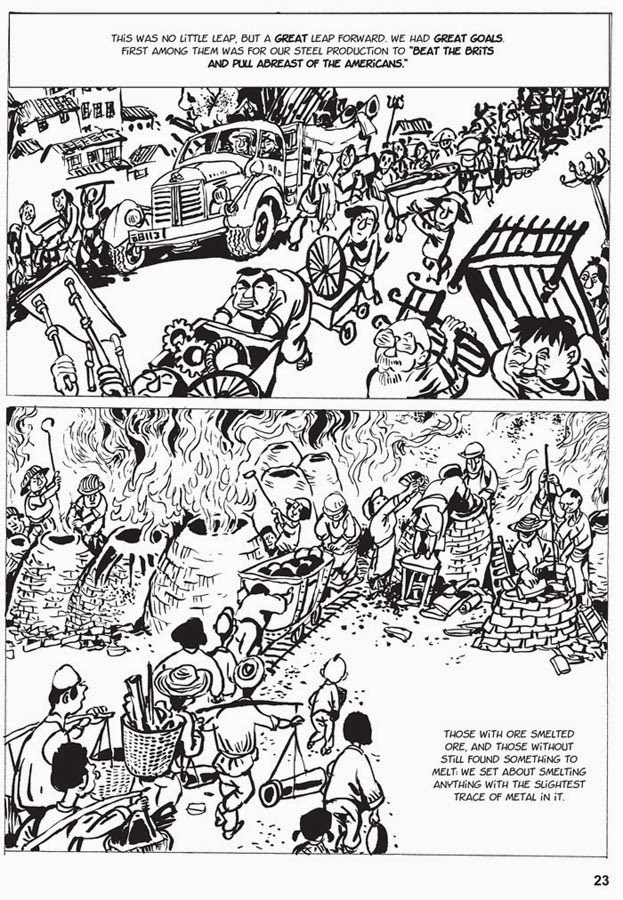 At its best, A Chinese Life is a magnificent recollection with plenty to teach us, both good and bad, but a graphic novel that’s considerably lessened by Li Kunwu’s chosen style of cartooning, which is messy. The panels are crowded, the figures odd, faces sometimes flat, and everything is rendered in a thick ink line that further contributes to the feeling of clutter. Opening the book at any page presents this unattractive style. It’s immensely puzzling from a man who’s had a long artistic career, and who very occasionally over the six hundred pages steps away from the format for a single panel to present a decorative and imaginative composition with an eye-catching landscape or a stunning portrait of a soldier.

As the title indicates, the book is Li’s life story youth juxtaposed with the growth and modification of the Chinese communist state, his experiences reflecting the political dictats. It’s ambitious, disturbing, disarmingly honest, and touching, not least because the opening third is now a man in middle age looking back on his youthful fervour. That opening section will on so many occasions prompt a gasp of disbelief. Born in 1955, Li experienced the harshness of the Great Leap Forward, an ideological exercise resulting in the deaths of twenty million Chinese at the lower end of the estimates. Then, imagine indoctrinated eleven and twelve year old zealots enforcing community standards under threat of denunciation to the authorities for counter-revolutionary behaviour. It happened all over China in the late 1960s.

When originally published in France A Chinese Life was serialised as three books, so while this English language edition offers the entire story, it also sags considerably, as the mistakes of the 1950s to the 1970s are recognised and in the 1980s Li’s life becomes ordinary. The story would benefit here from the honesty characterising his earlier life, as momentous personal changes are just mentioned in passing.

The 1980s introduced a new brand of state policy, leading to the China of today where capitalism is embraced in all but name. Here Li frequently relegates himself to a supporting character by chronicling the experiences of younger relatives, and it’s heartbreaking to consider what he and others endured for decades only for the same callous entrepreneurial attitudes to take hold anyway. Li defines this by contrasting the old country ways with the glittering modernism of the cities, and via conversations in massage parlours and market places. It’s facile, particularly as by this point he’s stopped explaining the ideology behind policies affecting millions. Li remains a Chinese citizen, and while the past has been reconfigured by the authorities, he has to tread an extremely fine line, and being circumspect affects the later content. The third section opens with a disagreement with French collaborator Philip Ôtié about how to present the Tianamen Square protests of 1989, to the outside world a defining moment of modern Chinese history. Li is reluctant, claiming he wasn’t there, yet later portraying dozens of pages where he wasn’t present. It’s in keeping with standing by decisions made as a young adult that to Western senses seem misguided, and even shameful on occasion, and these prove as shocking as some of the callous political dogma.

Almost all the most interesting content concerns the era when China isolated itself from Western ideals and its own past, distressing as the consequences were. As the list price for almost seven hundred pages is very reasonable, and this is over a third of the book, it’s worth buying A Chinese Life for this alone, but beyond it’s a slow decline.