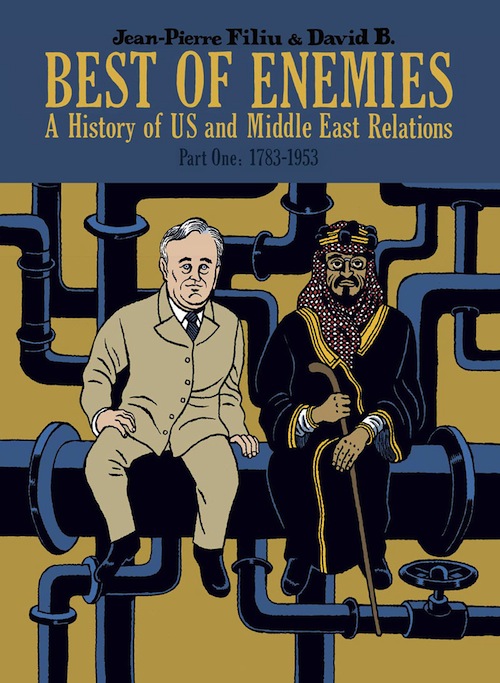 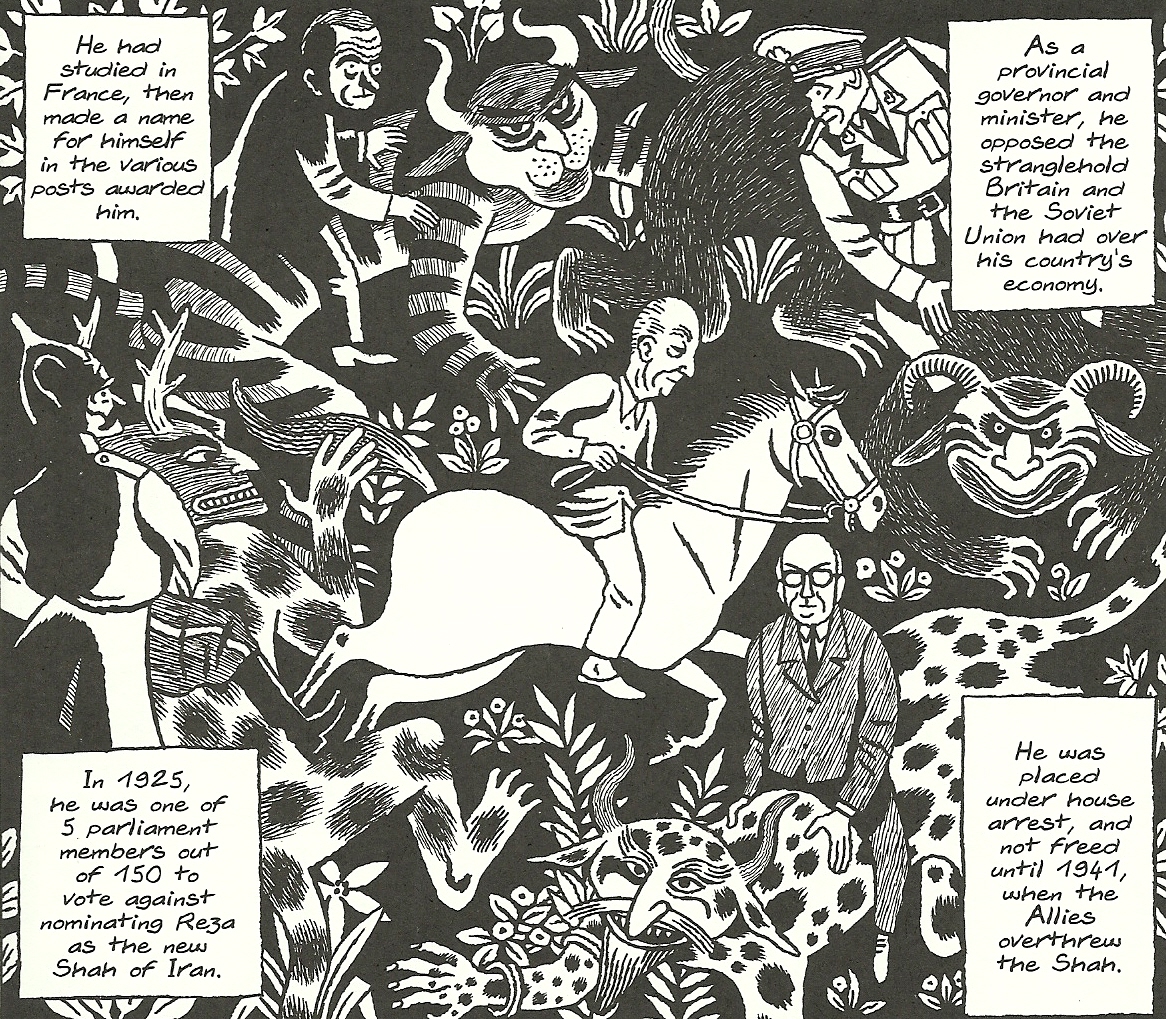 Best of Enemies is, as the subtitle tells us, ‘A History of U.S. and Middle East Relations’ by the well qualified team of Jean-Pierre Filiu and David B.

Filiu is a professor of Middle East studies, having previously worked extensively in the area. David B (aka David Beauchard) is best known for his acclaimed graphic autobiography, published in English as Epileptic. He’s previously tackled history in Black Paths, and the myths and history of the Middle East in The Armed Garden. While Beauchard is obviously the artist, the small print credits both as writers.

Chapter one (really an introduction) starts 4,500 years ago with the Mesopotamian epic of Gilgamesh. This highlights that the Middle East was the cradle of human civilisation, and draws parallels between ancient and modern events. The creators even ‘mischievously’ (as they admit) put quotes into these scenes from former US President George W. Bush and his Secretary of Defence, Donald Rumsfeld.

In ‘Piracy’ the fledgling US is unable to afford the vast ransoms for free passage along the Barbary Coast and consequently finds itself at war. In the first of many resonances with modern times, the initial squadron of American ships was sent without full political support, credible information or indeed a plan! However, once involved and claiming victories, support followed for further interventions. They also detail the Americans’ alleged first attempt to overthrow the government of a “hostile” nation.

In ‘Oil’ there are a number of threads intricately weaved together, including: Britain’s role; national uprisings, tensions between Sunni and Shia Muslims; America’s Christian missionary efforts; the roots of Israel and the U.S. role.  It’s not until World War II and the need for oil to “drive the US to get involved” again in the Middle East.

There are fascinating insights along the way into culture and customs: when the Saudi King is a guest on an American battleship, he refuses the offer of the captains quarters, and instead sets up camp on deck.

The final section tells of America’s covert actions against the Iranian government. The democratically elected president Mossadegh was a progressive, who stood up against British and American intervention, ultimately nationalising the Iranian oil industry. It’s a powerful, eye-opening and frankly, chilling blow-by-blow account of the CIA intervention tactics across a range of stakeholders. This is powerful stuff, and in outline corroborated by the US government’s later acknowledgement of their role. Events in distant countries won’t look the same after this.

David B’s stylised, flattened artwork lends itself well to the symbolic scenes and info-graphic elements. Every page is both beautiful, expressive, and informative. He positively revels in the uniforms, costumes, props and paraphernalia, swords, sailing ships and so on. He’s a master of panoramic battle scenes, seemingly influenced by the intricate, diagrammatic paintings of Uccello. For the more abstract political scenes, he uses symbolism and montage – we see the Iranian president, surrounded by the various methods and factions working against him: a politician bites his leg, and corrupted Mullahs wrap their words around him. Britain’s three contradictory promises are represented by an officer with a Picasso-like three-faced head that looks forward yet also to each side.

This is informative and powerful material brilliantly visualised. At time of writing airstrikes on Syria have just been agreed, so it’s not going to stop being topical any time soon.

The second and concluding volumes are also available in English.