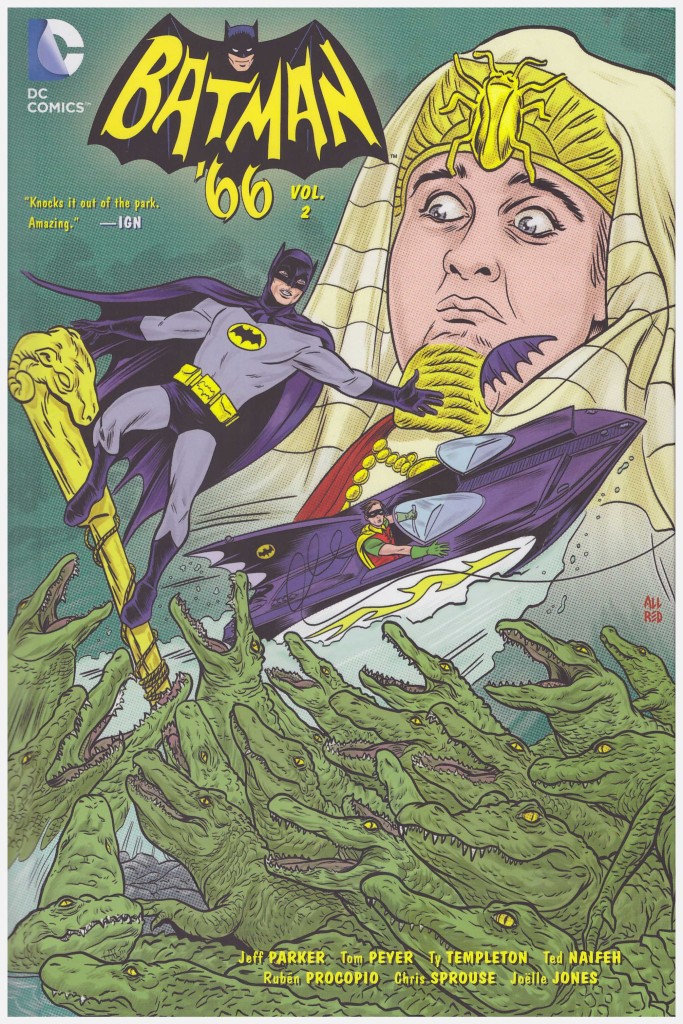 As it says on the back cover “WHAM! BIFF! Same Bat-style! All-new Bat-Adventures.” The swinging hit style of the 1960s Batman TV show transfers to a second volume, this time with Tom Peyer sharing the writing duties with Jeff Parker.

This may be a concern, given how adroitly Parker captured the spirit of the TV show in volume one, but from the first lines of Peyer’s dialogue any fears are set to rest. In addressing the Gotham Chamber of Currency Robin assures his listeners that “Batman would join me in saying don’t be uptight! Literacy is what’s happening, baby, and it’s a gas.” Parker continues his rich form, although it dips towards the end of the book with a Batgirl tale not imbued with the spirit of ’66, just not very good.

There’s far greater use in this volume of the ridiculous villains created for the TV series, but never seen in the comics, so those with a yearning for the Bookworm, Olga Queen of Cossacks, Shame and King Tut can find them here. The latter as portrayed by Victor Buono is wonderfully depicted on Michael Allred’s cover, but it’s Rubén Procopio’s more cartoony version inside (sample left).

The art is patchier than the previous volume. As the content is based on a TV show, surely cast likenesses would be editorial dictat, yet Craig Rousseau barely bothers and other artists don’t quite manage. A reason for the source material’s success is the contrast between the ridiculous plots and the straight-faced manner in which they were presented. The translation into comics should therefore favour naturalistic art rather than cartooning, and it’s cartooning that predominates here, with only Christopher Jones, Chris Sprouse and Ty Templeton (sample right) opting for a form of graphic realism. Procopio is a very talented cartoonist, here in two contrasting styles, yet his presentation over-eggs the material.

A more minor complaint is that of the big four recurring villains from the TV show only the Joker shows up here for a full appearance, with the Riddler given a cameo.

Peyer’s Bookworm story ranks among the best in the series, to date, well delivered by Templeton, but little of the remaining material matches the best of the first volume.