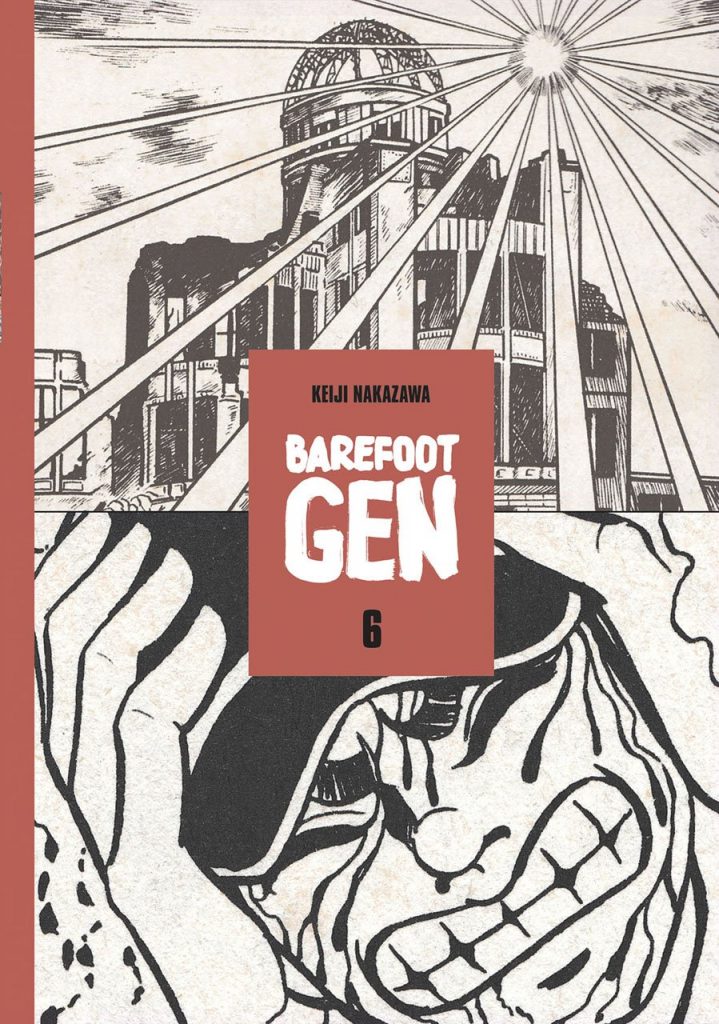 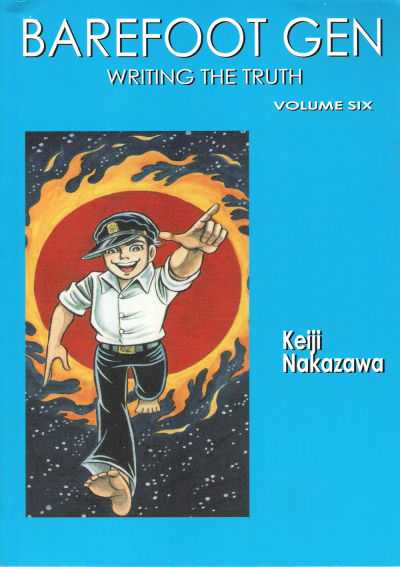 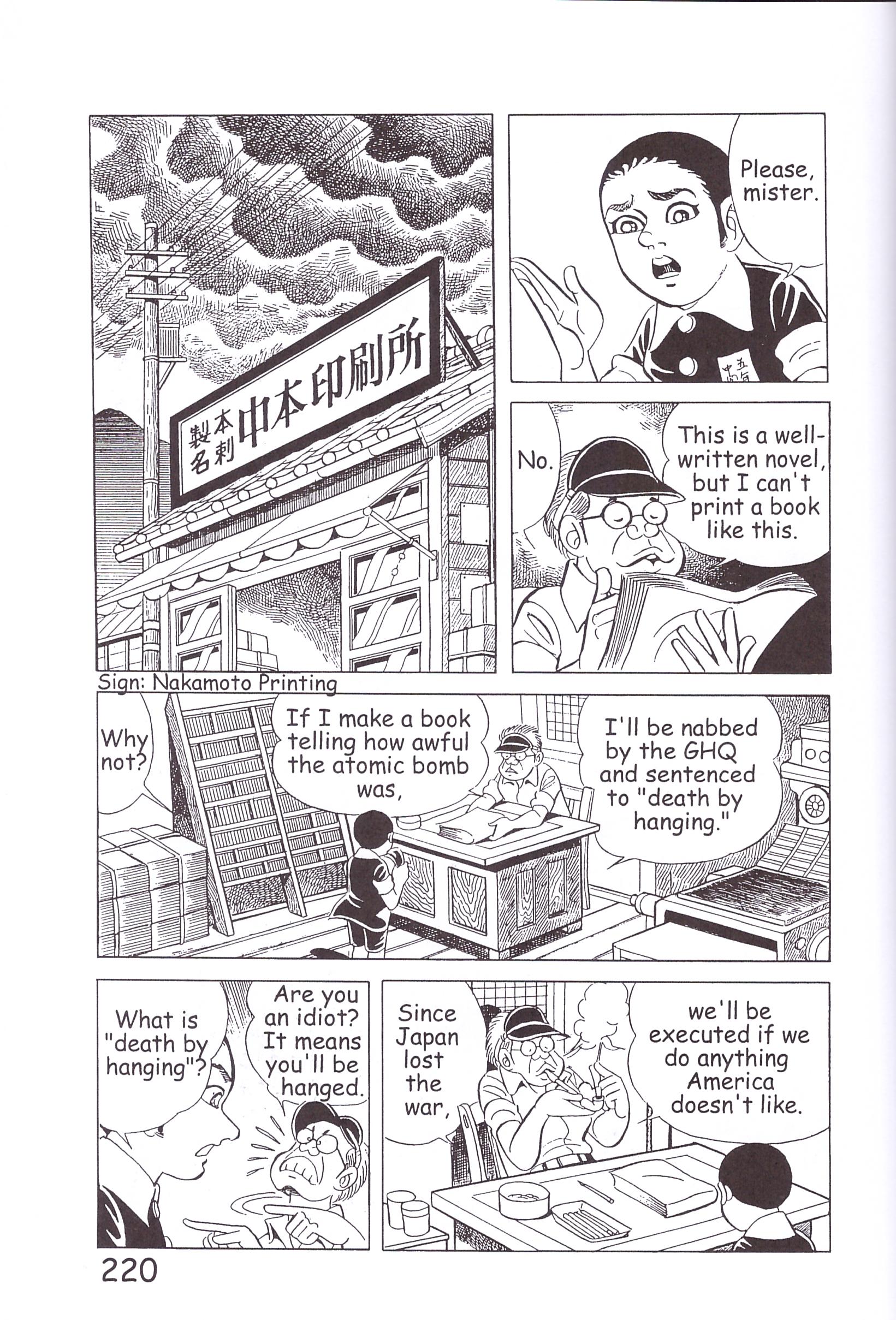 Two years after the end of World War II just finding enough food is a daily preoccupation for many survivors of Hiroshima, yet police rigidly enforce laws prohibiting food smuggling to eke out meagre rations. Writing the Truth begins with Gen and his friends actually successful on that score for once, but in recalling his childhood Keiji Nakazawa remembers that there was never a period of comfort, and if there was food on the table there was dire need of money for other reasons, in this case his mother’s health. Part of the problem is dealt with immediately afterwards, Nakazawa showing the close connection between corrupt politicians and Yakuza gangsters.

That plot involves Gen’s impulsive friend Ryuta, and for all the desperation in post-bomb Hiroshima, it’s difficult to imagine a kid his age managing to do what he does, this despite Nakazawa noting everything in Barefoot Gen is true. It’s not helped by Nakazawa’s cartooning. In the early volumes it served well as a distancing factor when showing the horrors occurring in the immediate aftermath of Hiroshima being bombed, but with a more commonplace realism the cartoon exaggerations are a distraction.

Writing the Truth is easily separated into two halves. Ryuta’s story finishes halfway through after which Nakazawa returns an unfortunate girl seen before, during what’s a more fragmented selection of experiences with Gen as both daring robber and voice of comfort. In what’s beginning to be a familiar pattern, the industrious Gen appears to have scored big only for disappointment to result. How frustrating it must have been in times of desperate need when scheme after scheme failed. In heartbreaking scenes this section also reiterates the pain of survivors scarred by the atomic bomb or aware the radiation is gradually killing them. That’s the case for the writer introduced in The Never- Ending War, whose work is rejected by publishers for telling the truth about the atomic bomb and its effects. That feeds into the volume title as we learn just how harsh the laws were governing revelation of the truth (see sample art).

There’s some confusion as to timescale, sporadically throughout Barefoot Gen, but especially in Writing the Truth. The second half opens by stating it’s July 1948, just under three years since the atomic bomb dropped, but somewhere in the middle of what appears to be a sequence of continued events there’s a leap forward another year. Nakazawa’s tendency to keep Gen consistently drawn instead of ageing him helps with identification, but muddies this issue.

Nakazawa achieves a fine balance between horror and lighter moments, which is very necessary considering the grim nature of humanity at their worst so often seen. While the capricious nature of children is shown, it’s more often adults behaving with cruelty and callousness. The volume ends with Ryuta’s return accompanied by a friend whose story continues in Bones Into Dust. 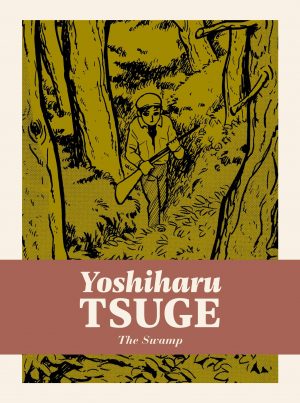 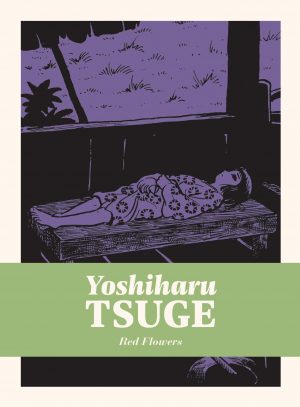