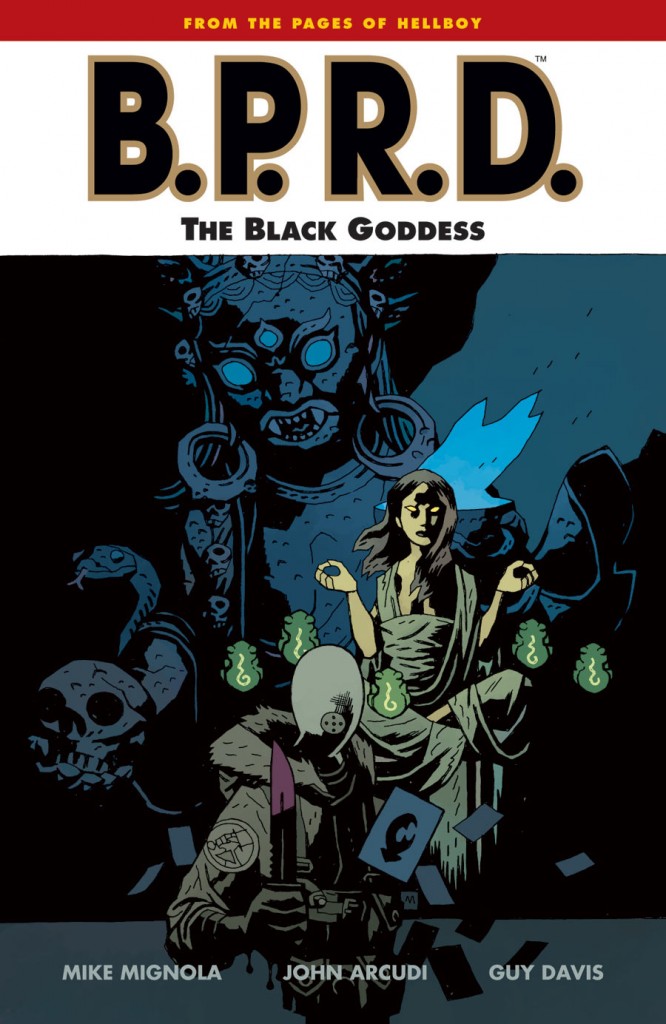 The events detailed in The Warning were both terrifying and devastating. Aware they had a problem with the widespread distribution of the frog creatures, the B.P.R.D. discovered an entirely different and well resourced threat beneath the ground. They’d at least known the origin and purpose of the frog creatures, but there was little previous information about the subterranean culture and their aim.

There’s also the unresolved mystery of how the ghost of 1930s adventurer Lobster Johnson manifested via Johan, and that’s where Black Goddess opens. His base is located, as is his sole surviving assistant and the information they supply in turn leads to a confrontation with Memnan Saa, with his history revealed along the way.

Memnan Saa proves as enigmatic as ever, even when laying out the past and future. He maintains his intention is to protect humanity, yet there is a fundamental point at issue meaning he cannot ally himself with others in doing this. His manipulation of Liz, whom he considers essential to saving the world, rankles with the B.P.R.D., and explanations unfold simultaneously with other events displaying the strength of the forces ranged against mankind.

Yes, Black Goddess is another stunning slab of horror from Mike Mignola, John Arcudi and Guy Davis, their best to date. They’re particularly sly with their portrayal of Johan. Is he a naturally furtive guy? Does he have his own agenda? Or is he merely tetchy after the disappointment of what occurred in Killing Ground? There’s almost a surfeit of ideas in this volume, greatly expanding the B.P.R.D.’s awareness, and surprises keep coming. The one drawback might be that elements won’t entirely fall into place for those who’ve not read any previous volumes.

There’s a larger than usual sketchbook section from both Guy Davis and Kevin Nowlan, and to end the book there’s a faux recollection from Davis about the Lobster Johnson TV series.

The next volumes sequentially are War on Frogs and 1947, the former an anthology with some nice background detail, and the latter set in the titular year and unconnected with the ongoing 21st century continuity. That picks up in King of Fear. That volume, this and The Warning are united in B.P.R.D. Plague of Frogs volume four.