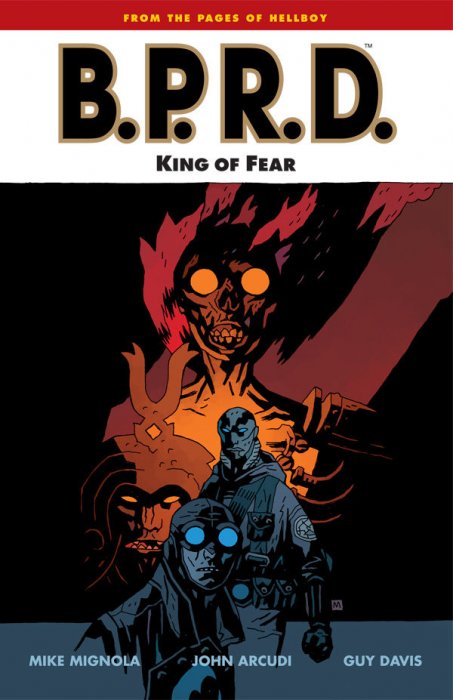 When last seen in The Black Goddess, the B.P.R.D. restored a team member, but, if the warnings they were given hold true, at the possible cost of devastating consequences.

One wouldn’t know this, though, from the two-stranded opening. Events of the previous volume have woken up the US military top brass, who are opposed to any further funding for overseas missions and believe themselves quite capable of handling domestic incursions by the frog creatures without assistance. Furthermore, they don’t need any advice, thank you.

The ghost of Lobster Johnson is still around, and has accompanied Kate Corrigan to Hunte Castle in Germany, which is where he died during World War II as detailed in Hellboy: Conqueror Worm. Also along is German army Colonel Bruno Karhu, with whom Kate is taking tentative steps towards a relationship. She certainly feels she can confide in him about her misgivings and her fears.

Bereft of official funding, Liz, Abe and a small team return to the site of another previous encounter with strange creatures, and there run into three people they’ve previously dealt with. Two are considerably transformed, death having been no impediment in one case, and it’s revealed that it’s not just Liz who has a destiny tied into the end days.

As the plots of B.P.R.D. volumes increasingly inter-twine and overlap it’s questionable how much any new reader will take from King of Fear. Those inclined to gothic horror material will perceive a fine adventure, with tension largely supplanted by exposition with little relevance if the cast remain unknown. Regular readers will be thrilled by the revelations.

In his afterword Mike Mignola credits John Arcudi with conceiving much of the direction B.P.R.D. would take, and with the manner it would progress. He likens his own contributions to those of the back seat driver. This draws one distinct era of B.P.R.D. to a close, while also setting up what will follow as B.P.R.D.: Hell on Earth. It does so in very satisfactory fashion, re-tooling B.P.R.D. and awakening a new sense of anticipation.

Guy Davis, as ever contributes stunning artwork. Among the requirements this time is a smoke belching monster large enough to sit on a town. The design process for this behemoth is laid out in the customary selection of sketches at the back of the book. King of Fear, The Black Goddess and The Warning are united in B.P.R.D. Plague of Frogs volume four.