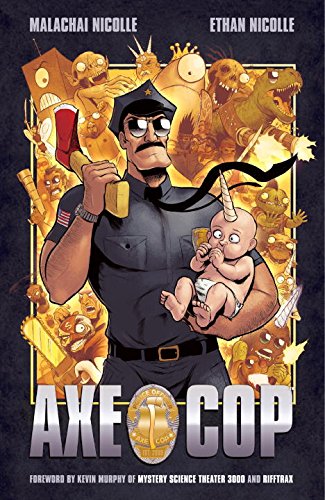 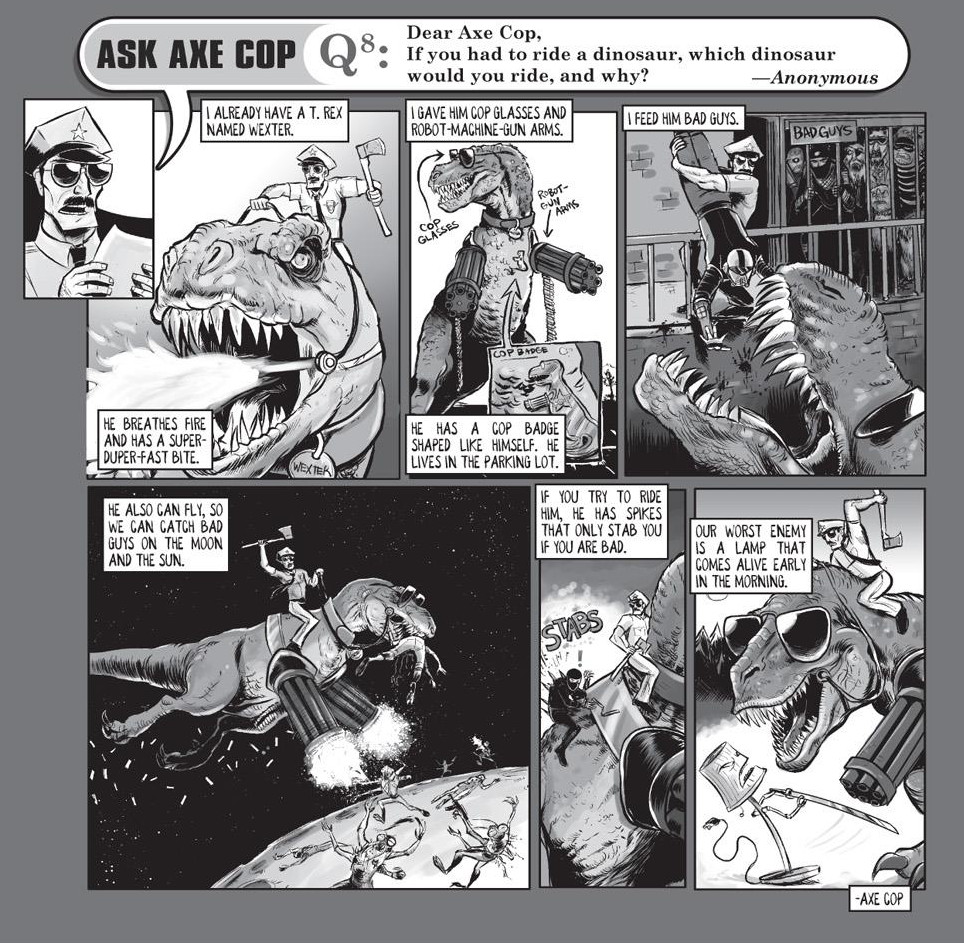 Considering they’re comics, locating out and out genuinely funny material is increasingly difficult when it comes to graphic novels. Sure, there are enough with some funny lines or the occasional staged comedy moment, but graphic novels that make you laugh out loud consistently are few and far between. Welcome to Axe Cop.

It’s artist Ethan Nicolle we should be thanking. Aged 29 when work began on the series, he was astute enough to realise what an incredible creative imagination his five year old brother had when they play acted together. Malachai Nicolle’s mind was unfettered by what could and couldn’t work narratively and so unfurled wild, sprawling and surreal stories that just completely switched direction when he became bored. Ethan began drawing the strips as a web comic in 2009, and by 2013 animated short stories were being screened on Fox TV.

The character of Malachai’s that Ethan seized on was Axe Cop, never named as anything else, who prefers to go about his officially sanctioned business with an axe rather than a gun or a truncheon. He’s a good guy putting the world to rights, but with the sense of moral justice only a child can justify. As noted in Kevin Murphy’s introduction, this isn’t satire with an ironic blanket, but an unfettered and unique vision translated as faithfully as possible by Ethan.

The first strip, the ur if you will, encapsulates the entire series to date. At the scene of a fire a 1980s style cop in shades and with moustache finds a discarded axe, and on that day he becomes Axe Cop. He needs a partner, and so is joined by Flute Cop – the flute apparently being the nearest toy to hand when Malachai was playing – and they set about chopping the heads off some dinosaurs. Unfortunately some dinosaur blood spills on Flute Cop and transforms him. He’s now Dinosaur Soldier. This is all supplied in a single page with the compression of a 1940s superhero story in a magazine needing to fit in half a dozen other features.

Other sublime creations include Uni-Baby, a baby with a unicorn’s horn often thrown at villains to spear them, Pretzel-Head, a dog named Ralph Wrinkles, the idea of sun picking-up gloves, and a truck full of ninjas. It’s for the psychologists to figure what they mean, but there are recurring articles in the strips beyond the understandable guns and dinosaurs, horns for instance, and poisons.

‘Ask Axe-Cop’ became a regular feature of the website, in which Malachai would respond to reader questions, and it’s even funnier than the main strips. We learn that wearing a cat suit Axe Cop sneaks into the rooms of bad guys while they’re sleeping and kills them, that when the last bad guy is killed he’ll have kids after his best mate’s turned into a woman, and that he prays for the sharks.

This is hilarious from beginning to end, and is contextualised with explanations from Ethan separating the strips. There have been six collections to date, and the next is Bad Guy Earth. 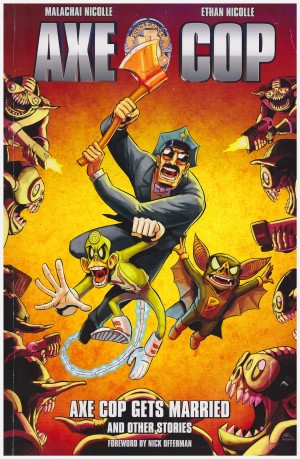