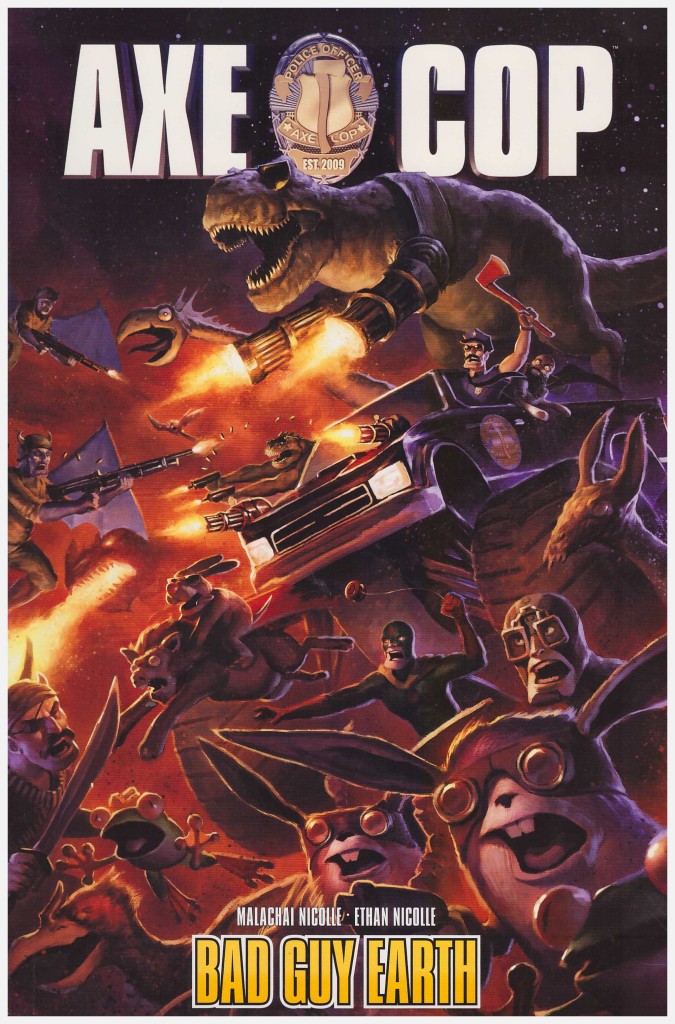 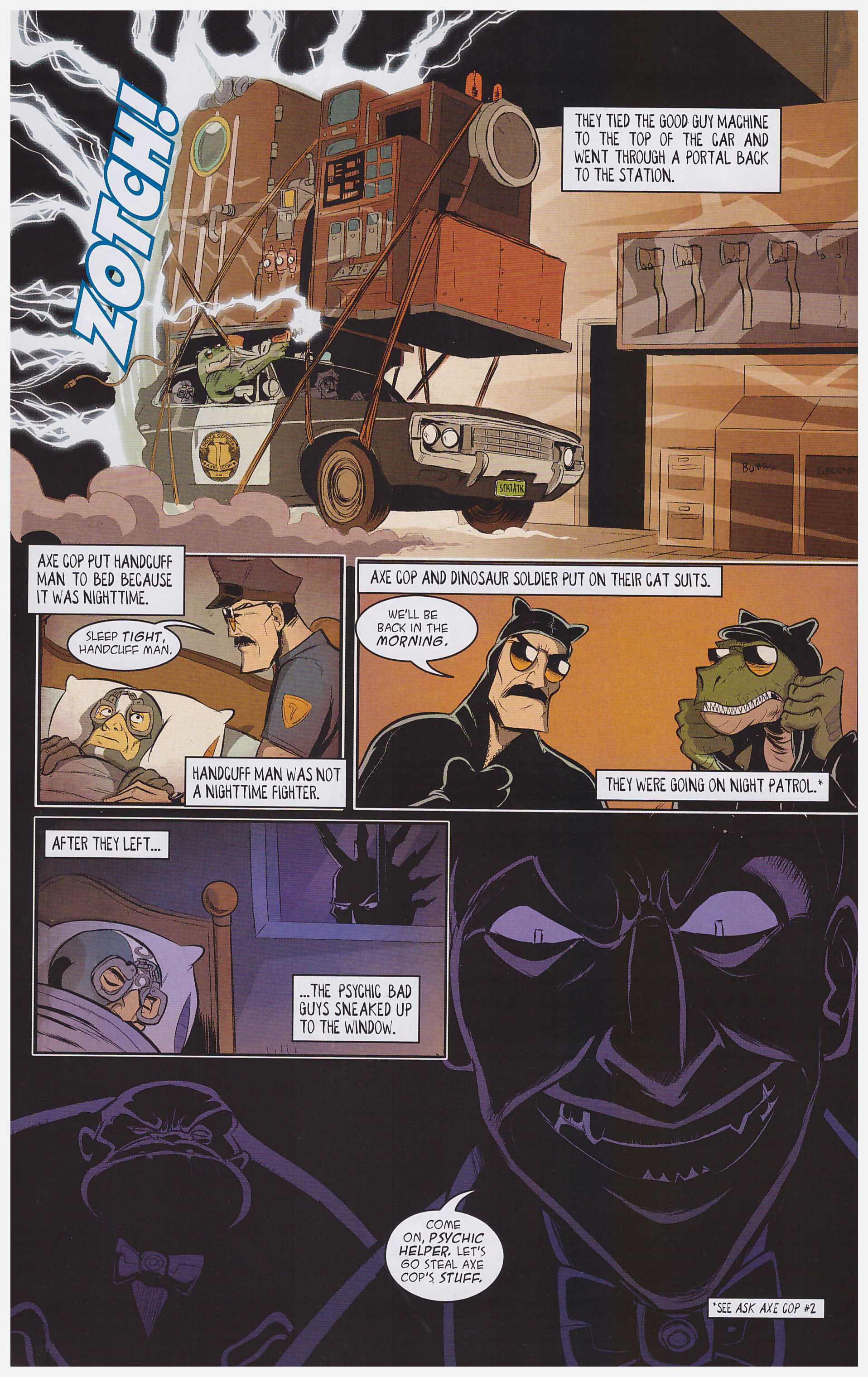 Bad Guy Earth follows the established pattern for Axe Cop of Ethan Nicholle (aged 30) mining the prodigiously inventive mind of his now six year old brother Malachai and then working the stream of consciousness plots into a coherent narrative. The big difference is instead of aiming for brief strips, extending over a few pages at most as in the first volume, both are striving for the epic. The epic duly arrives.

Axe Cop and Dinosaur Soldier are at a restaurant when they notice another planet encroaching. Instinctively aware that it’s a Bad Guy Planet, they have to destroy it. It’s not that simple, though. Others are watching and they’re capable of stealing the entire army under cover of darkness.

Malachai’s logic is brilliantly naive. Having to present a credible reason for a cop with an axe, one who’s not considered a real cop by the standard patrolmen, he expands Axe Cop’s background, by having him attend Axe Cop Police Academy, where he reads books titled How to be an Axe Cop. This doesn’t convince the regular cops, who proceed to list Axe Cop’s violations of police rules. These include no travelling from one planet to another or going back in time, and specifically he’s not to use an axe. When he becomes tired of one plot, Malachai just jumps to another. Axe Cop might have to head back in time to save the dinosaurs, or have a desperate need to transform into a bull. Meanwhile the Psychic Brothers have sent chicken brain robots out into the world to steal diamonds to transform the Good Guy Machine into a Bad Guy Machine from which they’ll create Bad Guy Earth.

Ethan’s art plays everything straight. There’s no mugging. There doesn’t have to be Malachai’s crazily inventive mind comes up with laugh after laugh for adults. The bad guys’ prayer to Satan asks for his horns (amen) and the plot encompasses how Sockarang’s mother died – fighting crime. She wasn’t very good at it, but she’s eventually revealed to be an evil magician woman riding a gorilla riding a lion. Malachai pits aliens against dinosaurs and Vikings against baseball players, and has a planet with a massive unicorn horn that causes wishes to backfire, but which can be nullified by covering it with a massive traffic cone. That latter sequence occupies just five panels as Malachai’s mind has already moved elsewhere, to the bad guys assembling an army of pirates, ghost knights, monsters, animals and wrestlers.

There’s such energy and so many ideas that despite only being three chapters Bad Guy Earth is an incredibly dense read. Lesser writers could pick any number of plot springboards from its pages. Despite this, as a graphic novel it’s on the short side, but the bonus material is very welcome. As well as Ethan’s page detailing how the story came about, there are photos of Malachai play-acting the plot, Ethan frantically trying to keep pace with notes as Malachai spills out concepts, extraordinary characters who didn’t make the final cut (say hello to Mister Chicken Chicken Slice), and multiple pages of character sketches. It’s all enlightening and almost as much fun as the story.

It’s quite the challenge to imagine the graphic novel reader who won’t appreciate Axe Cop on some level, be it ironic, lovingly or for the very young at face value. Roll on the Coen Brothers movie. It’s about time they tried a 1980s SF action thriller.