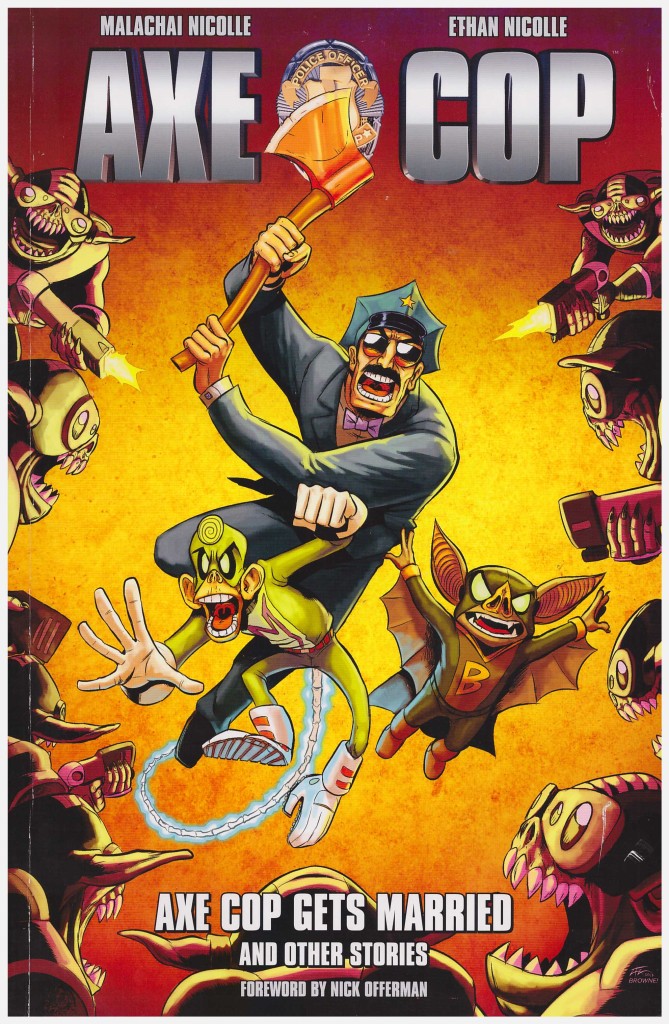 Surely the title Axe Cop fans thought they’d never see! After all, when previously asked, Malachai Nicolle revealed that if Axe Cop were to get married it would only be after all the bad guys had been dealt with and then to his best buddy, who he’d turn into a woman. Have all the bad guys been defeated? Or there was that time he was married to Girl Abe Lincoln…

As ever, these are the frenetic Axe Cop adventures conjured up by the fertile mind of now nine year old Malachai, and illustrated by his now 33 year old brother Ethan. They’re every episode of the 1960s Batman TV show rolled into one, and at times even funnier.

The title story is one of two longer efforts combined with thirty episodes of ‘Ask Axe Cop’. There’s very little to suggest nuptials are on the way with an opening sequence in which two orphans are transformed into Bat-Boy and Monkey-Boy, the latter additionally gifted a zombie tail, which sadly sees little use. However, it all makes sense, or at least as much sense as Axe Cop ever does as Malachai’s insanely inventive mind jumps from one topic to the next. So why isn’t Axe Cop hypnotised along with rest of the church congregation? Because he always eats hypnotise-proof food in the morning. See, Malacahai’s more than a few steps ahead of the reader and stays that way. This is no cheat, no cop-out. We see Axe Cop’s wedding, and before then there’s a date at the greatest fighting restaurant in the world which has to be seen to be believed.

‘The Dogs’ is the second lengthier effort, and it barely features Axe Cop, as it’s March and Axe Cop has decided to take a month to celebrate his birthday. Fortunately a dog has recently acquired dog food based powers (don’t ask) and even more fortunately runs into Ralph Wrinkles, Army Chihuahua and Presty the Pug before he takes on the Siberian Witch Doctor cat twins. It all appears to run very smoothly, but, again, Malacahi is well ahead of the game. Oh, and both stories feature the full dose of secret combat moves.

The longer strips are good, idea-packed in way that comics that claim to be idea-packed never are, but the true genius is the shorter material of Malachai answering questions submitted to Axe Cop. They’re intense bursts of creativity, and his all time greatest misunderstanding may be that Google have armies of guys working for them who have to research topics quickly and send back answers to search queries. If they were really smart they’d go for a delay and let the guys who work for other search engines figure out the answer before replying. And how’s this for poetic justice? Anyone who steals will have the amount they’ve stolen dropped onto them in coins. And did Bradley Wiggins really submit a question about growing a moustache instead of sideburns?

No-one’s reached book five without loving Axe Cop, and there’s more to love here, including a truly astonishing moment when Malachai hits on something universal. It’s a poetic gem as tears of sorrow and desperation form into a sparrow that flies away to find help. How’s that for poignant?