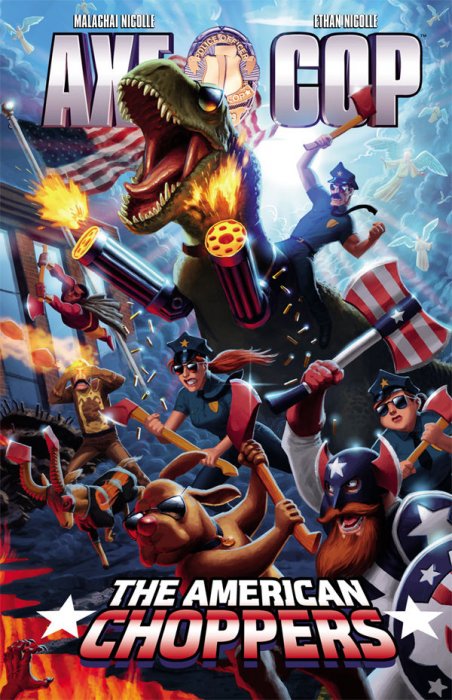 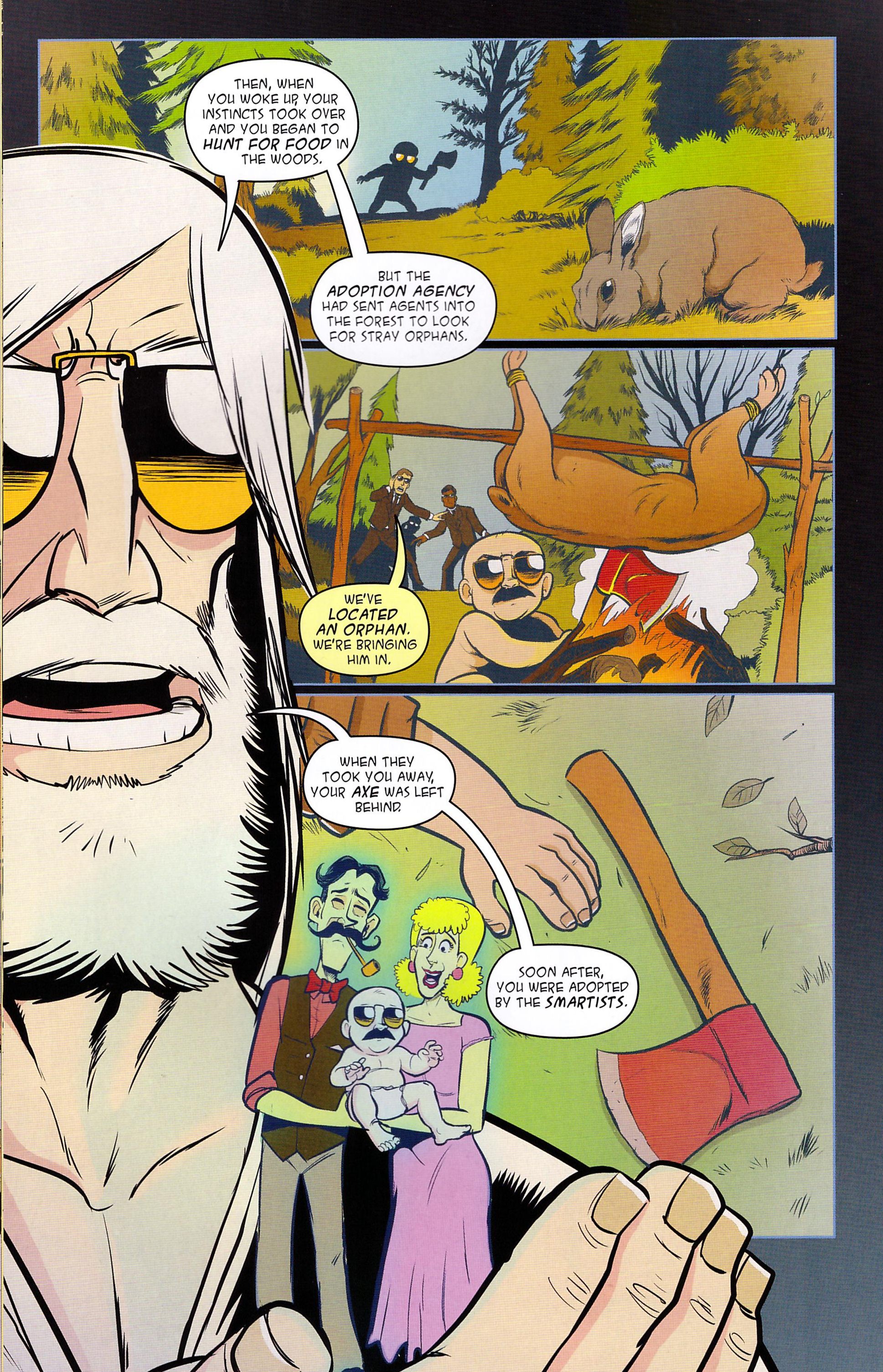 The adventures of Axe Cop originated when Malachai Nicholle’s fertile five year old mind began creating adventures for play acting with toys. By the time The American Choppers concluded he was ten, understanding the world a little more, and had seen his idea first visualised by his older brother Ethan on a web page, then progress into a series of graphic novels on the way to an animated series. What will his expectations of adult life be?

The sole acknowledgement of continuity from Axe Cop Gets Married is Axe Cop leaving the post of President of the World to his wife because there’s just not enough fighting. He rapidly becomes associated with several other axe-themed crimefighters, which is just as well as not long after that he’s dealing with rogue sentient axes from hell.

As with previous books a young mind’s lack of logic goes a long way to making American Choppers a hilarious read, and it’s always interesting to see what’s been influencing Malachai around the time he constructed the story. Religion plays a part here, Malachai using God to reinforce his likes. The plot, as ever, is riddled with solutions the seasoned writer would dismiss as unfeasible, yet to get to what Malachai considers important such as protecting the ham chef, he’ll use the quickest route possible, with no consideration of conventional methods. Hilarious concepts abound in the incidental detail such as a goat with axe horns, Axe Cop wiring up an entire forest with security cameras, and theological questions of vast importance instantly dismissed. It should be stressed that Axe Cop isn’t something to laugh at because it’s bad in any way. It releases an exuberant joy in the audacious imaginative leaps. No other writer would come up with trees first trapping the souls of dead demons, then releasing those souls when chopped down. It’s a brilliant idea, and topped by the plot revealing that anyone who’d read the restricted chapters of The Lumberjack’s Handbook would know this. Other revelations abound. Apparently Bobber and Gobber Smartist aren’t Axe Cop’s parents after all, and you’ll be gobsmacked at who his father is.

None of this would be nearly as funny without Ethan Nicolle pitching the art perfectly, using a naturalistic form of cartooning that opens up for action sequences, yet plays hilarity absolutely straight (see sample art).

He’s also concluded that the time may have come to pass the axe, and the book is completed with ‘Revenge on Rainbow Girl’, which is cartoonist Tom Martin working in conjunction with his nieces Amelia and Charlotte, respectively five and nine years old. Immediately apparent is the greater emotional content girls bring, as the plot is set in motion not by action, but the breaking up of a friendship. However, their concept of the way the world works is equally individual, and there’s a fantastic scene of Axe Cop having to tape kids’ heads back on with gaffer tape to repair them. Good though this is, it serves to highlight the unique workings of Malachai’s mind as it doesn’t match his sheer off the wall wackiness. Were this the introductory Axe Cop strip it would have been a passing novelty, not the start of a series.

There have been no more Axe Cop books since the conclusion of American Choppers, but material created since can be found at Axecop.com, including more of the brilliant ‘Ask Axe Cop’ feature, absent from this book. Axe Cop: six volumes of genre-busting hilarity, and that’s some bequest.