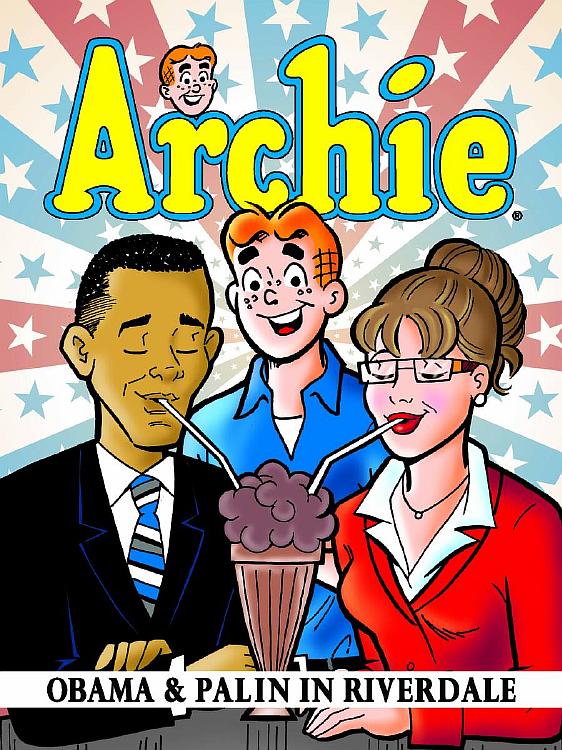 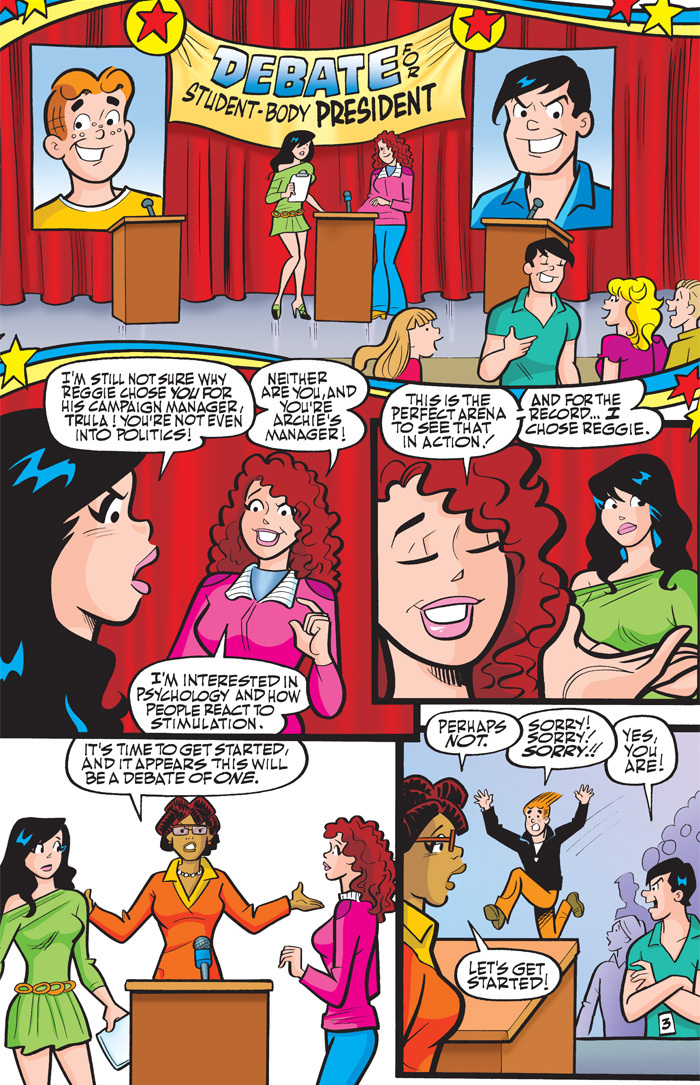 For nearly three-quarters of a century Archie Andrews has epitomised good, safe, wholesome fun, but inside the staid and stable company there has always lurked an ingenious and deviously subversive element of mischief and a keen eye for a headline. A willingness to dip traditional toes in unlikely waters led in 2010 to an extremely bold and outrageously controversial step that turned heads in all the right places and hopefully nurtured the political sensibilities of many kids who will be voting in future Presidential Elections.

Mr. Obama has long been out of the closet in regards to comics (apparently he collects Spider-Man and Conan) and after his 2008 election guest-starred in a load of different titles. Sarah Palin’s position on funny books? Who knows, but she too has been the star of a whole bunch, although mostly as a star-spangled, bikini-clad bimbo toting swords and big guns.

She’s represented in a more even-handed and respectful manner when she and the President hit Riverdale, the two-part story gathered in this slim paperback collection with the similarly-themed contents of a Veronica story. It’s a dossier of democracy and fair play for beginners, coincidentally packed with lots of laughs and a few salutary tips on electioneering.

As written by Alex Simmons and drawn by Dan Parent, Machiavellian games begin when Archie and Reggie clash in a debate as part of their efforts to become Student Body President. Their clearly different styles of presentation don’t sway many potential voters and Veronica, as Archie’s Campaign Manager, decides it’s time to bring out the big guns: Money, Power and Influence. Reggie’s manager is little better. Trula Twyst is a ruthless psychology student eager to push people’s buttons just to see how they react.

Having already once met Barack Obama, Ronnie blags her way into a Presidential event and manufactures a photo-op between the Most Powerful Man in the World and the most naïve kid in Riverdale. She then uploads it and lets the little people in Riverdale make their own assumptions. At Mantle Campaign HQ, Trula knows a winning ploy when she sees one and decides to fight fire with fire; orchestrating a similar sneaky session for Reggie with blithely unaware Governor and potential future Presidential candidate Sarah Palin. The dubious association with celebrity enflames the youthful voters of Riverdale High, but when the professional politicians see how they’ve been shabbily misrepresented by school kids. they both head for the sleepy town to make their disapproval known. As they arrive, so do the news crews and all too soon a shambolic media circus ensues. Terrified, Archie, Ronnie, Reggie and Trula head for the hills but eventually realise the only solution to their problem is to face it head on, take their medicine and make reparations.

Following amazingly clear, concise and compelling biographical features, the cartoon tomfoolery resumes by harking back POTUS’ first appearance in Archie Comics in Parent’s ‘Ms. Lodge Goes to Washington’. Here our junior stars enjoy a class trip to Washington DC, seeing the sights and learning some civic history. However, when a tour of the White House leads to Veronica intruding on a press conference and accidentally impressing the President, she is so moved by the moment and on the trip home she resolves to help him fix the economy…

Including a cover and variants gallery, pin-ups and a large selection of roughs, cover sketches and parody covers, this is a splendidly witty slice of all-ages comedic fun with the added bonus of introducing the basics of political thought to youngsters in a manner both considered and effective.