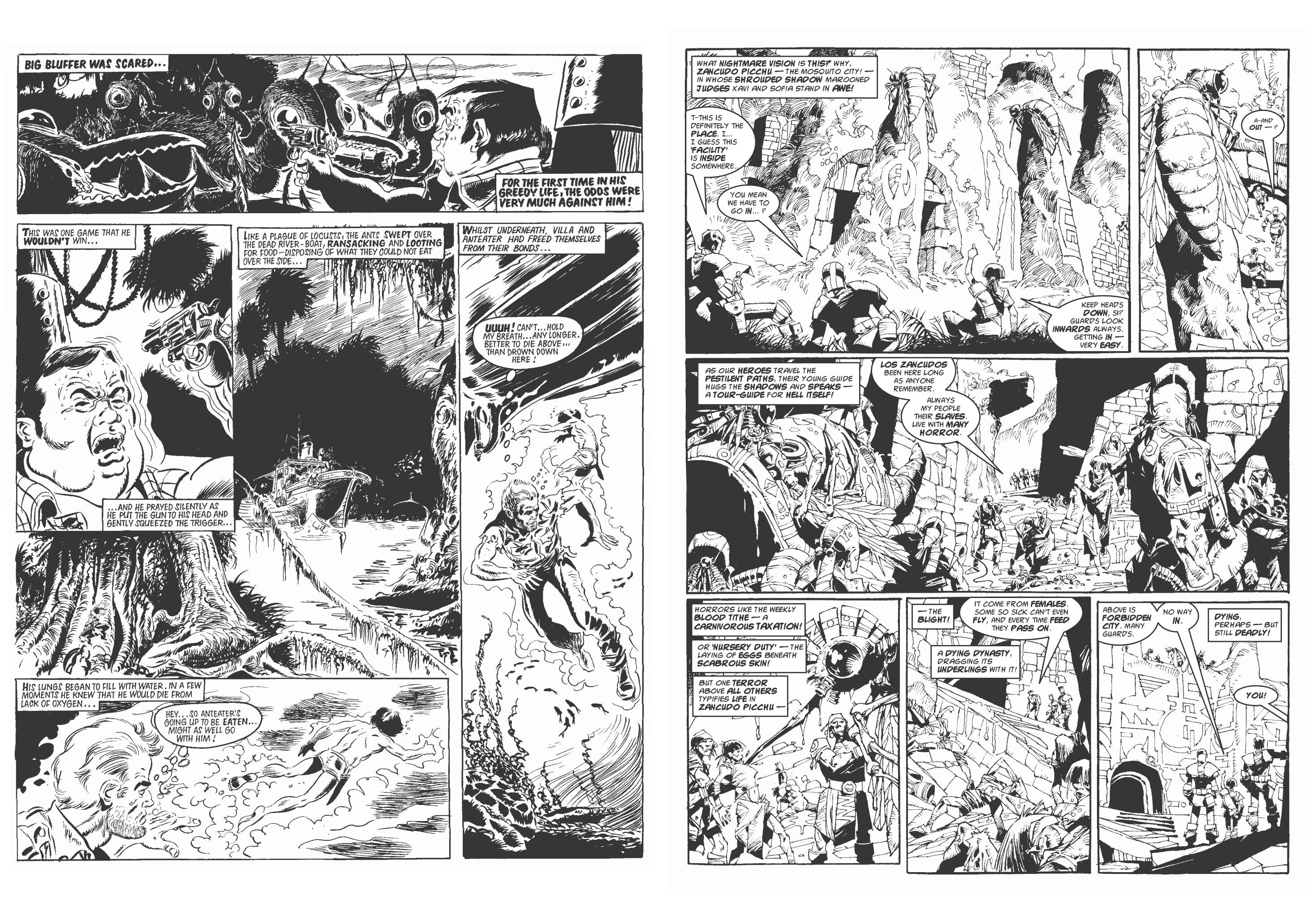 Ant Wars is the type of series that no longer runs in 2000AD, and in one sense that’s a shame. Not because its great – time hasn’t been kind – but because it’s finite and brief, in and out in eighty pages telling a complete story unconnected to any other strip or world. The similarly insect-themed back-up strip closing the collection, Zancudo, proves The Judge Dredd Megazine is a little more catholic.

It’s sometimes easy to forget that when it was launched 2000AD was squarely aimed at the boys’ comic market, the expectation being that seven was the starting age for picking it up, and twelve the cut-off, so until the publishers realised otherwise, strips like Ant Wars were often the order of the day. What would ten year old boys find exciting? Giant ants rampaging through the Amazonian jungle! The very thing! Now go off and write it Gerry Finley-Day. He was a relatively young writer for the era, but one who eventually didn’t fit what 2000AD became, unable to pull away from the adventure strip template that had seen British comics through decades. These segments are decently written for what they are, but what they are is a series of strips designed to artificially prolong a story episodically, while enabling it to be finished in five pages when the plug was pulled. Finley-Day perpetuates the adventure week by week as a Brazilian Army Captain and a teenage tribesman are the only ones who acknowledge the threat of giant ants, mutated, inevitably, by radioactivity. An extraordinarily unsentimental and dismissive ending is very funny.

The stories look their best when illustrated by José Ferrer. Something about the strip must have caught his imagination because the quality of the art is head and shoulders above most other work he produced for 2000AD. His half page story introductions are detail packed, he defines the cast well and doesn’t short change on troops of ants. Lozano’s also good, only responsible for a single episode, putting all the effort into foreground figures rather than backgrounds, but Alfonso Azpiri and Pena don’t appear that interested.

Si Spurrier and Cam Kennedy’s back-up strip may feature South American Judges and an evil psychic, but is closer to the b-movie spirit of Ant Wars than Judge Dredd. When the Judges’ craft crashes in the jungle they encounter the lost city of Zancudo, where a giant mosquito queen is served by drugged Amazonian tribesmen.

What can be said about both strips is there’s no pretension about them, no attempt to pretend they’re anything more than enjoyable, high-octane claptrap, which counts for something, but neither is a masterpiece.