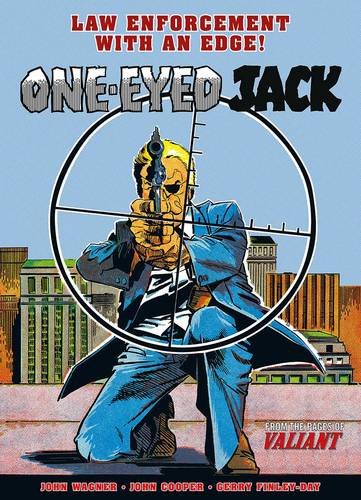 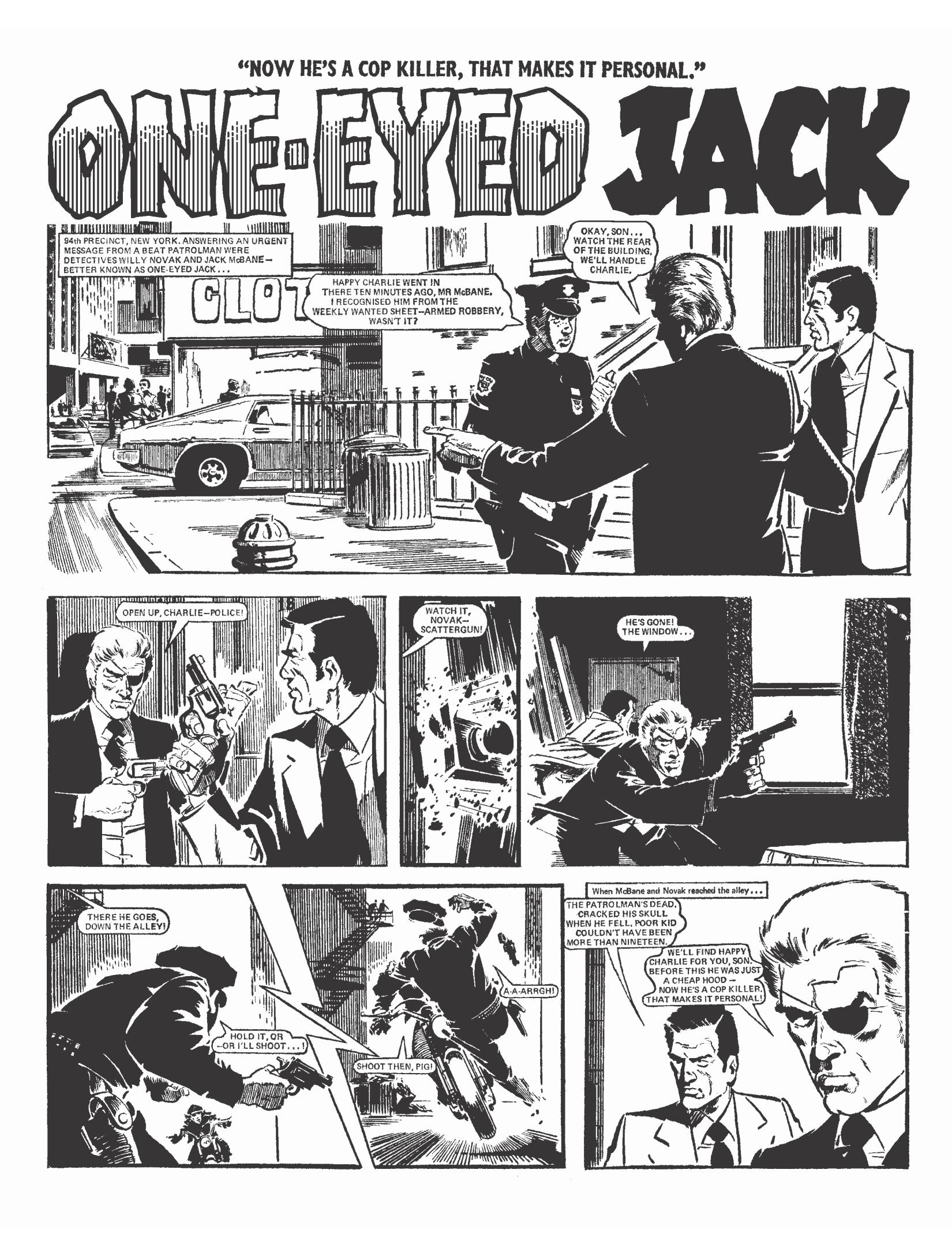 By 1975 British weekly anthology comic Valiant had been running for thirteen years, and was dying from lack of attention when John Wagner was appointed editor. He recognised the resolutely old-fashioned content as contributory and set about introducing something that at least reflected the 1970s.

One-Eyed Jack was based on every New York cop show or film Wagner had ever seen, but primarily Dirty Harry. The opening episode shows how Jack McBane gave a punk the benefit of doubt and lost his eye as a result, only to see the kid freed on a technicality. That was it for McBane playing by the rules, and thereafter he followed a shoot first and ask questions later policy. In these days of greater police accountability, in the UK at least, the early stories are surprisingly shocking, and that’s not just due to the brutality, as one early tale has McBane digging up a corpse. Wagner and later Gerry Finley-Day are both good at supplying a complete crime drama, all the more remarkable for most episodes only occupying three pages, ensuring a car chase in nearly every one. With so few pages available the stripped down stories move at breakneck pace, avoiding anything bar the essentials, which means McBane’s character is one note, and everyone around him ranks lower than that. The brevity of the strips requires shorthand in the form of ticking clocks or newspaper headlines,

As good as the writers are, what really impresses on first glance is the art of John Cooper. His grim and gritty streets of New York are superb, from the grimy alleyways to the great establishing shots that open every episode. He’s taken the time to research US cars, completely different from those seen on British streets, and his action scenes are fantastic, lifelike and thrillingly laid out. McBane’s visually distinguished from Dirty Harry by the eyepatch, but otherwise under Cooper there’s little to separate them. He takes the time to ensure the supporting cast for any particular episode are diverse, although that’s only in terms of look. This is a version of New York that’s almost exclusively white, and more than likely to have a moustache. One of only two prominent black characters manages a boxing club held up by crooks in Donald Duck and Mickey Mouse masks, and the other appears in the final colour strip, which does Cooper’s art no favours.

McBane has a wide brief. It’s usually gangsters that occupy his attentions, but those stories will be spliced by the occasional tale of a plane hijack or a serial killer on the loose. The latter is one of several stories extending beyond the three pages, cleverly still providing full value excitement but with the thrill of the cliffhanger. Other longer tales include McBane framed for murder, a separate story in which he’s jailed for accepting a bribe, and the strongest emotional drama in which McBane actually quits.

These stories were never meant to be consumed in one sitting, and doing so reveals repetitive qualities, but any handful at a time still provide brutal thrills.