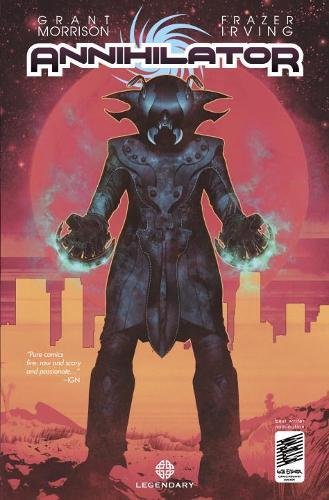 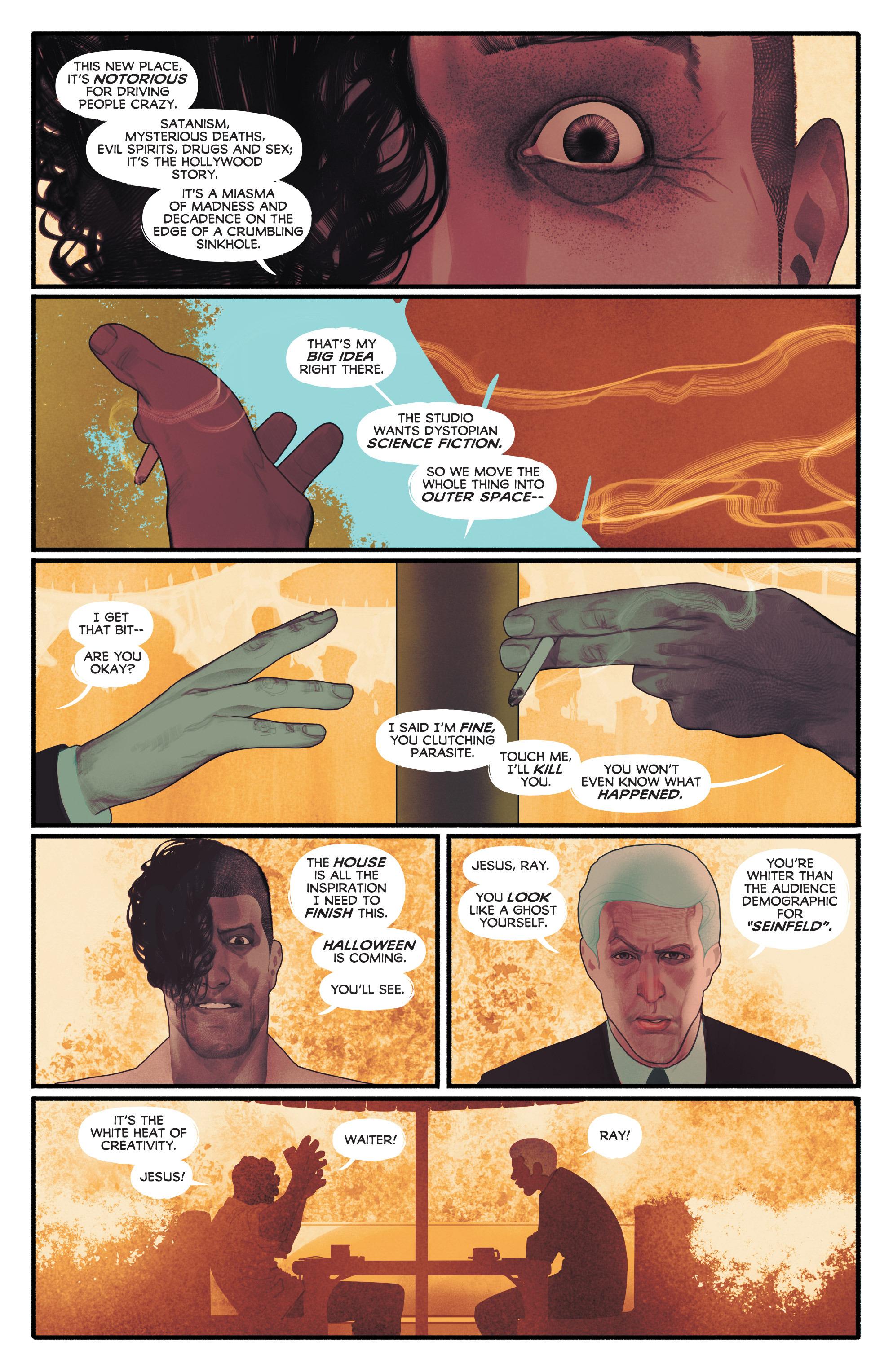 Ray Spass is an arsehole. Complete and total. Any talent he once had has been eroded by a prodigious coke intake and spliff habit. He goes up, he comes down and no-one likes him. With good reason.

The mood of Annihilator is very much that of the eye-popping French science fiction that Heavy Metal printed in the 1970s, coupled with the wild road trip of Fear and Loathing in Las Vegas. Grant Morrison infuses that with themes seen in his works for years. We have the breaking of the fourth wall, the power of writing, illness as a spur, mind expansion, identity, and the influence of fiction on reality, here prompted by the reverse. The first example occurs early as Ray applies his day to day experiences to the movie script his agent is attempting to prise out of him. The plot transforms Spass renting a house with a history of uncanny incidents and subsidence problems represented by a small deep pit, to the film’s protagonist’s exile to a planet where previous residents have all gone mad in the vicinity of a black hole. There is, however, a second black hole about to intrude on Spass’ life, one annihilator of the title, and that’s just before he meets Max Novax, the hero of his film script.

Due to his more outré work, there’s a tendency to probe deep into Morrison’s strips for hidden meaning, but beyond the recycling of favoured ideas, this is just nutty science fiction, not quite delivered with a poker face and very enjoyable. You always get ideas with Morrison, and the main one to Annihilator is the brilliance of Novax’s story being distilled to what’s in effect a data ball that registers as a tumour in Spass’ brain. If he believes Novax all he has to do is complete the writing of a story that will free Novax and he’ll be cured. His doctor has told him the tumour is inoperable and will kill him. Spass is such a dick, amusingly referred to as “a ninja master of self-destruction”, that it removes the usual tension generated by the protagonist in a fatal situation with a deadline, but Morrison compensates with the sheer pace and verve of the plot. There’s also the extra layer of Spass still thinking in terms of writing a movie script. “Sorry my life isn’t anodyne enough for you and your audience!”, snarks Novax, “Vada can assemble and dismantle a universe in seven days”. The allusions are obvious and jolting.

It’s not just Morrison, however. Annihilator is a career highlight for Frazer Irving. He deftly switches between the normality of Spass’ life, although this rapidly escalates to action-movie territory, and the wonder of the advanced civilisation Novax inhabits. Irving achieves the separation via the definition of colour, then also varies his art to incorporate another Morrison trope, that of appropriating the work of others for redefinition. Spass progresses over the course of the book, the tumour/data bullet having its effect, and Irving’s rendition is memorably haunting, and the numerous film homages clever.

Annihilator is fun, but not perfect. There are a couple of places where Morrison is carried away by what’s frankly toss, with the analogy of the teddy bear for one, and the constant self-criticism is wearing, but the good far outweighs these moments. Go for the adrenaline rush and Annihilator works just fine.