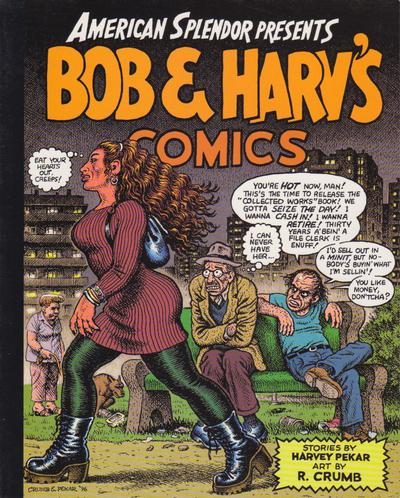 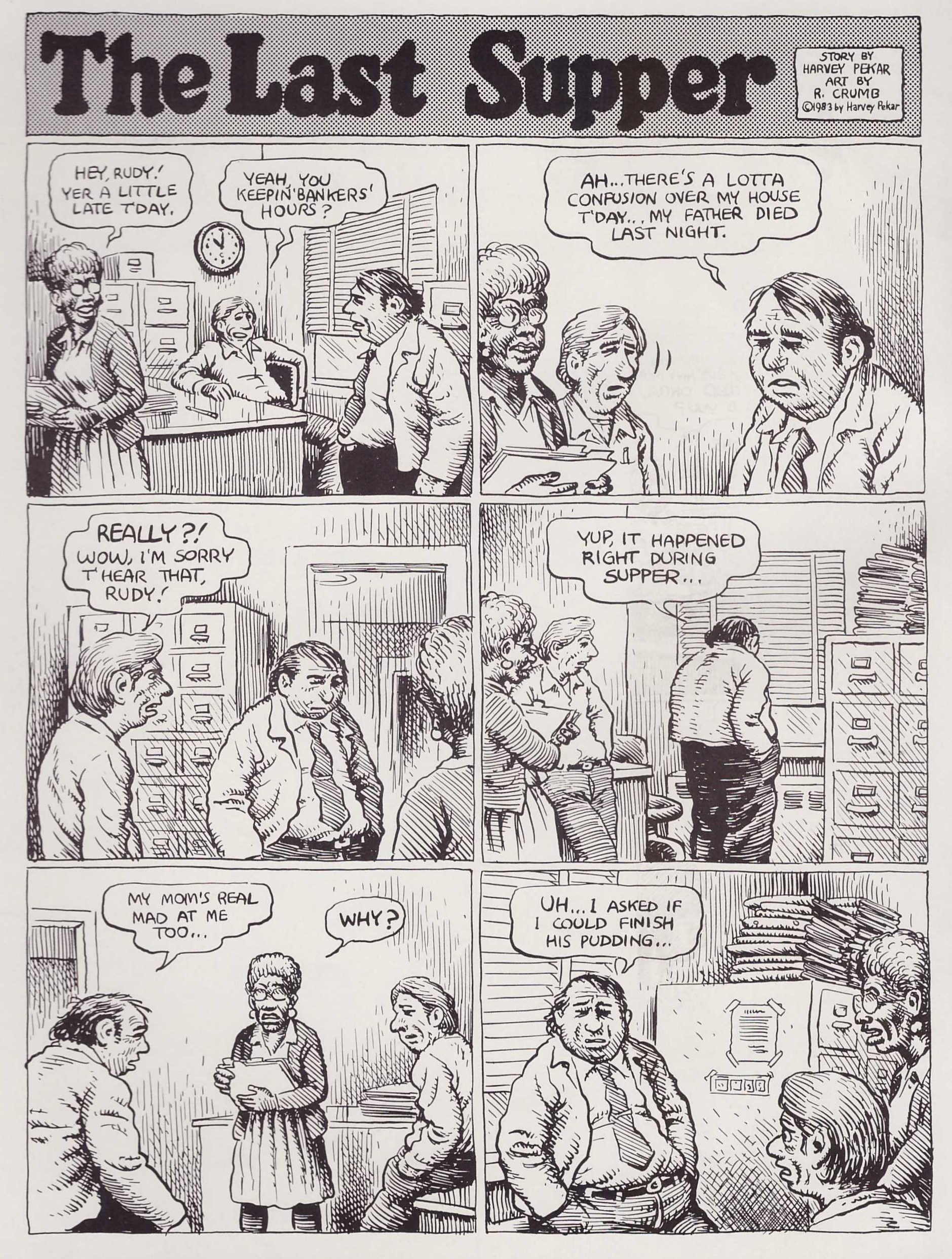 The idiosyncratic American Splendor presented a unique and poignant outlook from the start, that of curmudgeon, kvetcher, historian, jazz enthusiast and bona fide voice of street level Cleveland, Harvey Pekar. After a couple of submissions to Underground titles in the mid-1970s he started to self-publish his recollections, overheard observations and conversations as an annual magazine. The problem was, however interesting his writing might be, it only took a glance at the contents of around the first half dozen issues to realise there was only one artist of real quality illustrating his material.

Pekar first met Robert Crumb in the early 1960s, the pair bonding over a love of jazz before Crumb became famous. A satirical strip here shows Pekar strong-arming Crumb into illustrating his material, but there was actually a willingness to do so, and for several years from the mid-1970s Crumb produced strip after excellent strip for American Splendor. Pekar, knowing which side his bread was buttered, almost always ran them at the front of his magazine.

Known for his experimental nature, Crumb disciplined himself for Pekar’s work, illustrating largely monologues and conversations. Towards the end of the book there’s a gem in which an enthusiastic African-American guy is attempting to sell jars of pickled okra to women he works with by spinning tall tales. Crumb, who elsewhere drew strips considered racist by some, here delivers some beautiful characterisation via posture and expression.

Lest we forget, though, this is equally Pekar’s work, and his nuanced ear for dialogue serves him well throughout. His sideline occupation was selling LPs to people at his workplace. “Whatchew talkin’ bout, man?? Dis Earth, Win an’ Fire lates’ album! It col’ blooded!” is great, authentic without ridicule. For those who would consider otherwise, there’s Mr Boats in the same strip, a black guy with a completely different speech pattern. The enthusiasm generated for Earth, Wind and Fire was prompted by Mr Boats commenting “Say, fella, don’t you know that stuff is just a bunch of noise?” He could be the echo from within a British gentleman’s club.

In a completely different heavily inked style there’s ‘A Hypothetical Quandry’, which is quite prescient. Printed in 1984 Pekar’s been approached, then ignored by a large publisher suggesting an anthology of his material. As he heads out to buy some fresh bread he muses over the benefits of being able to support himself as a writer, wondering if the comparative comfort would alter his attitudes, concluding “Let’s face it, I’m not gonna become a mellow man over night.” Crumb’s subtlety is exemplary in capturing the assorted moods experienced. That anthology would appear three years later.

Not every strip works. That Pekar can hear wonder in the mundane is a strength, yet there are some strips, even ones drawn by Crumb, that just induce a shrug of the shoulders. Thankfully these are invariably among the briefer offerings. Some of those are classics, mind. A single pager, which Pekar used as a magazine cover, has Pekar and Crumb in their younger days trading records, each thinking “What a Sucker!”

Pekar strived for realism, and Crumb delivers it with regard to his writer, drawing the contemporary version with middle-aged spread, and the younger version with a manky old vest. For the first decade of American Splendor it was Crumb who best presented Pekar’s voice, and it’s all collected here.