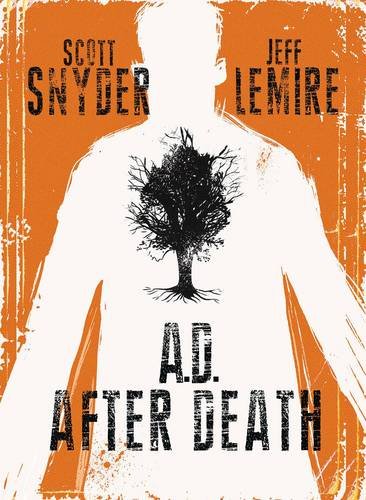 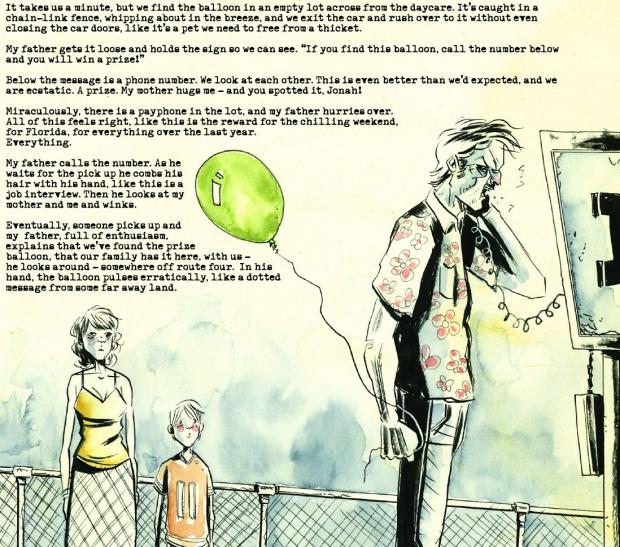 It’s 825 years since death ceased. That much we know relatively early, but it’s the why and how providing the conundrums. Jonah Cooke considers himself responsible, and he has a plan to put things right, but the few who know about the plan consider it misguided. The opening chapter of three is spent getting to know Jonah, and using a combination of text with illustration and standard comics permits a greater density to this background. We learn about a conventional upbringing scarred by his mother’s medical condition, a sideline in thieving that’s never left him, his more recent past at high altitude listening for signals from other humans and what appears to be a terrifying present day existence. It’s a tremendous exercise in character building.

That’s down to both creators. There are surely two Jeff Lemires employed in comics as the work rate under that name beggars belief. The writing alone is a phenomenal amount, yet here he makes a very welcome return to illustration. On his more personal projects there’s not a comic artist able to equal Lemire’s presentation of a melancholy personality. The scratchy and jagged people he draws are resolutely ordinary, protagonists whose experiences are etched into their expressions, and so it is with Cooke. Scott Snyder’s familiarity comes from plot-driven action comics, so it’s surprising to learn that he too can construct an utterly convincing three-dimensional character from the ground up, building a depth to Cooke via psychological consistency. From everything presented in the opening chapter Cooke is a man we come to know even if we don’t know what he’s up to, and the learning is a wonderful anecdote-spliced experience. Snyder weaves magic from the mundane.

It’s but one aspect of the story, however. There’s the consideration of whether or not immortality is desirable, and the associated limitations of memory. Can we formulate a new colour? How do you steal from a museum? These and other thought-provoking concepts and puzzles provide their own interludes for consideration, amid a plot that becomes increasingly more sinister as the pieces slot together. The narrative viewpoint is entirely that of Cooke, but is there someone who knows him better than himself? That’s the crux of the heartbreaking finale to this character-driven story, which is entirely consistent with everything we know about Jonah Cooke from birth to immortality. It’s one hell of a journey and well worth taking, but the one slight qualifier is that the smarter reader will have figured out the ending before it arrives.

Unless you’ve a fondness for the pulp flimsiness of serialised comics, the sturdier graphic novel format is almost always the superior presentation, but anyone considering buying A.D. may want to take a look at the three serialised chapters. These were published at magazine size in nicely designed packages featuring textured card stock covers and as such are the type of artefact that could well end up in Jonah Cooke’s collection.