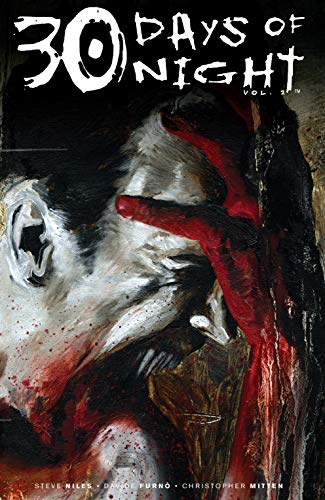 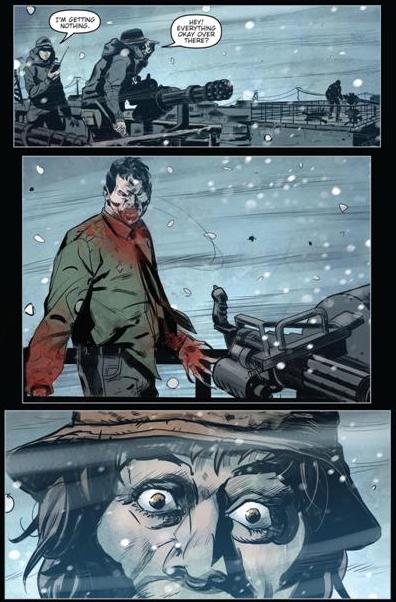 Eben Olemaun has razed Barrow, the town he died for and protected in his undeath, down to the ground. Previous events have shattered his last hold on his humanity, the anger and bloodlust obliterating the dam wall that held his predatory instincts at bay. Alice Blood is realising that she is out of her depth as more vampires surface with murderous intent. This is the result of her actions, of her ego and now the world is at risk as, slowly but surely, Eben makes his way south to Los Angeles.

The Beginning of the End was not an auspicious start to the ongoing 30 Days of Night series intended to add some finality to the saga. Sam Kieth’s art though impressive in its fluid swap from one style to another was not the best choice. Davide Furnò resets expectations as he opens the proceedings depicting Eben’s rampage with a smooth clean yet detailed visceral clarity. How he renders the snowy landscapes is an excellent touch (sample), the columns of acrid smoke holding an immersive quality.

Christopher Mitten illustrates the rest of the story, his work no less detailed than Furnò, but going for a scratchier style that emphasises the horror aspects. Its ambience is heightened by introducing blurred streaks of darkness to indicate how ferociously fast the vampires move, a nice touch that gives a cinematic appeal. More important is the palpable connection between artist and writer, Niles and Mitten able to make the reader invest in even bit players on the edges. Niles scripts them as if they are going to be integral to the entire story, even those that only last six seconds, something that intensifies the true terror of the vampire threat. That is a characteristic few writers consider and while there is a familiarity to the plot, particularly for anyone who has read the original 30 Days of Night and tie-ins, it’s a tactic that reinvigorates the story instantly.

Blood-Stained Looking Glass is a vast improvement on its predecessor. Both Furnò’s and Mitten’s contributions elevate not only the story, but Niles’s energy as well, so much so that Niles’s would recruit Mitten to illustrate his other franchise Criminal Macabre. A decent cliffhanger leads this story into the next episode, 30 Days of Night: Run, Alice, Run.