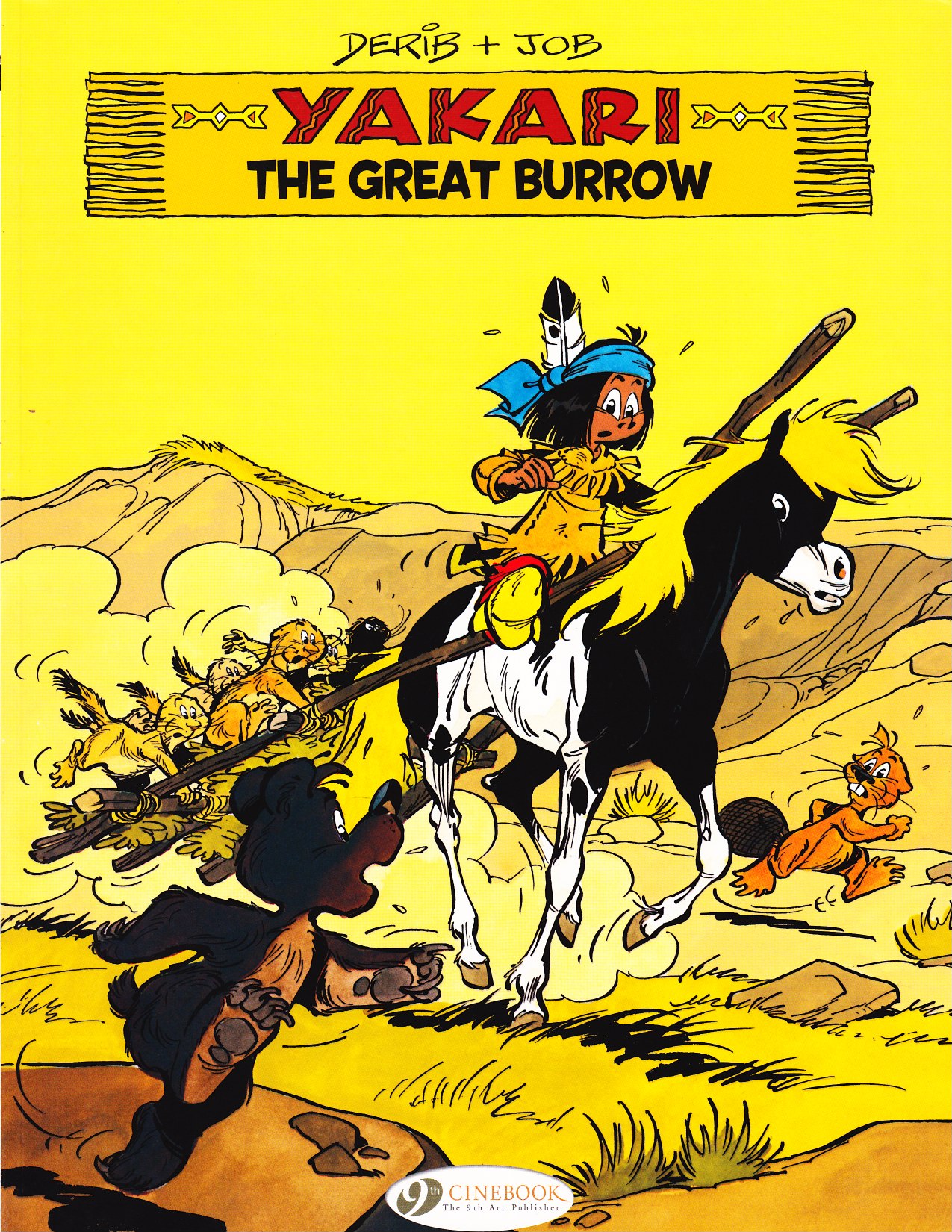 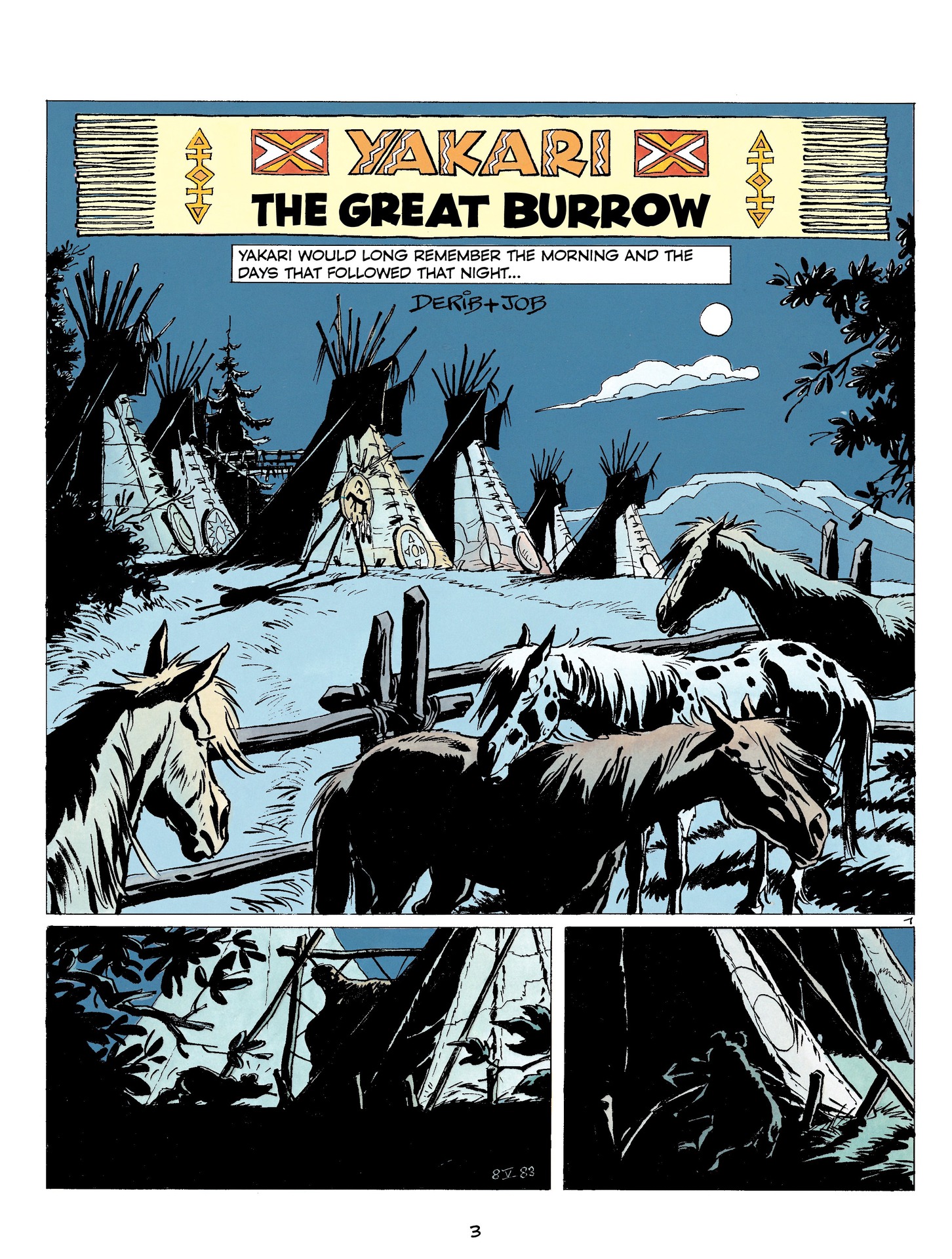 Illustrator Derib’s and writer Job’s series about a Native American Sioux includes myths and legends from the culture, and features a young boy named Yakari who has the ability to communicate with animals. His human friends respect this talent and it’s earned him friendship with a wide variety of animal denizens. The Great Burrow (Le Grand Terrier) is among the earliest of Yakari’s adventures, ranking tenth in a list that currently stands at 39 in the original French, and is his thirteenth outing in English.

Opening to some of Derib’s customary spectacular night time scenes (see Yakari and the Land of the Wolves for some stunners), Yakari wakes up to find a mysterious challenge has been issued to him during the night. As a true Sioux tribesman, a challenge rankles in his young but proud heart, so our plucky hero is forced to follow the signs left by the orchestrators of this mystery. We know they’re bear cubs from the beginning without knowing their names, but Yakari must discover their identities for himself. The mystery leads deep into a burrow abandoned by prairie dogs and when Yakari discovers the identities of the pranksters, he joins them in playing pranks on their parents. It all fun until things go wrong, the pranksters becoming trapped underground and the true test of Yakari’s Sioux heritage has begun as he rushes to rescue the trapped bear cubs before it is too late.

Job’s clever plot captures the spirit of adventurous and mischievous children, building the mystery in one third, spending another on mischief and pranks at frustrated parent’s expense before building the tension as Yakari races against time. Despite the anthropomorphism of the animal characters, their interactions are remarkably relatable. Kids love the idea of being able to outwit and prank adults, especially their parents, and the frustration of people not enjoying the joke at their expense is well rendered by artist Derib, a grumpy owl trying to sleep but disturbed by noisy children likely to remind you of an irate grandparent.

The creators know their target audience inside and out, whether it’s the longing for adventure or the encouragement they crave from their parents, building on the nostalgia and romanticism of boyhood spent in wide open spaces ripe for adventure and mischief. The story only falters due to the fact that there are a number of characters present introduced from earlier stories or with connections to earlier stories. Suddenly meeting them here for the first time makes it disjointed unless you have already read The Grizzly, The Beavers, The Stranger and Little Thunder’s Secret before this. The Great Burrow relies on series sequencing far more than other Yakari stories and while it isn’t entirely necessary to read the series in order, having done so makes for a far more enjoyable experience.

Job is a good storyteller with consistently good ideas and Derib’s illustrations can capture emotion and nuance in any sized frame, so while the primary audience is children, working through the series with the nippers is a pleasant family experience.

Yakari learns more about the Sioux way of life and their connection with the world around them in Lords of the Plains. 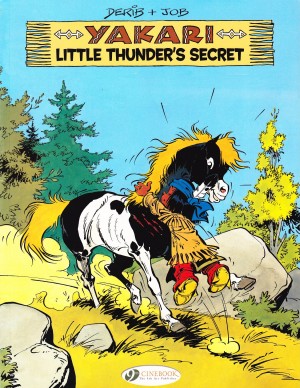 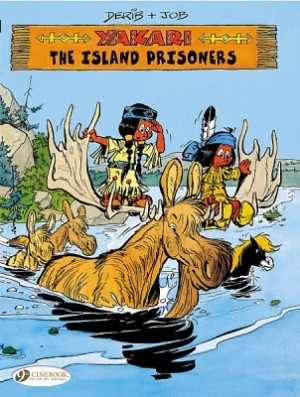 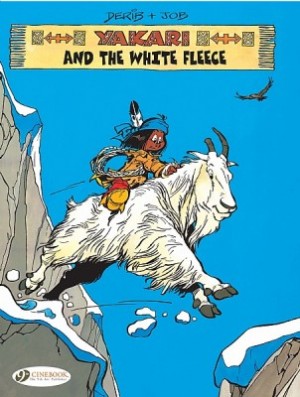 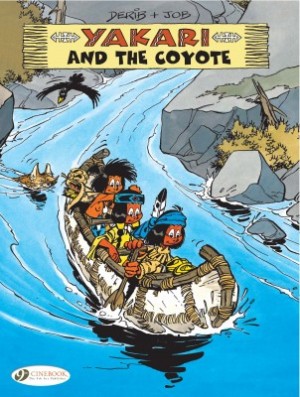