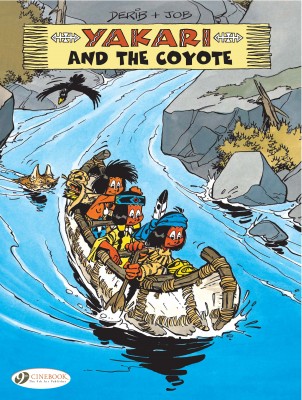 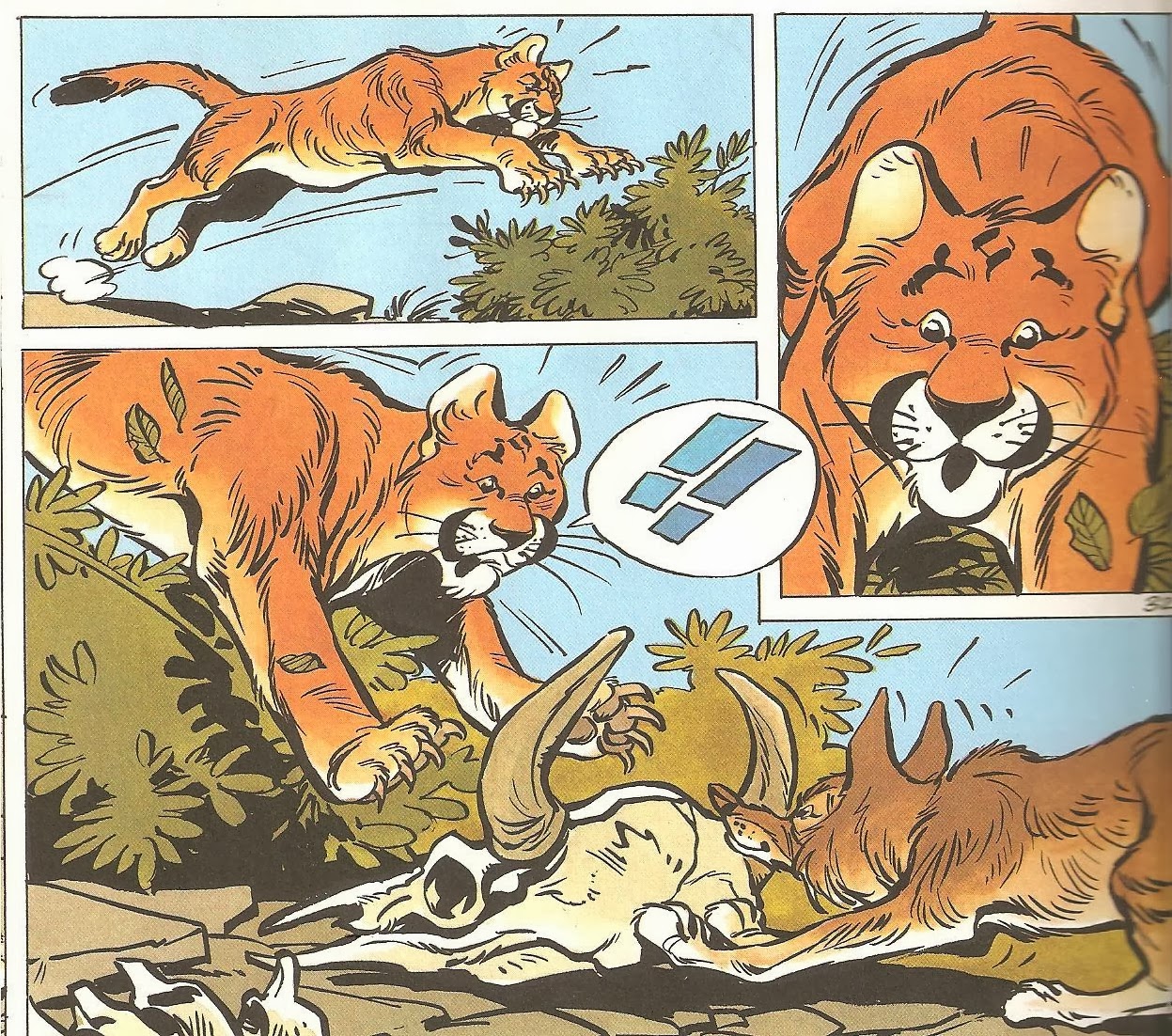 It’s summertime again, the sunshine glorious on the cool river. Yakari’s friends the beavers have found a battered old canoe they give him as a giftand he recruits Rainbow and Buffalo Seed to patch it up, setting off down the river when it’s done. Unfortunately they are caught in the rapids and are forced to make land, deciding to camp for the night where a series of events leads to a meeting with the wily Coyote and his family. Coyote is a trickster and thief, something Yakari doesn’t entirely approve of, but when Buffalo Seed is cornered by a cougar and Coyote offers to help, they will need every trick Coyote and his good friend Crow have in their book in order to get their friend back safely.

Yakari and the Coyote (Yakari et le Coyote) is the twelfth outing (Cinebook place this as ninth) for artist Derib’s and writer Job’s little Sioux boy who can communicate with the animals. The series is primarily aimed at children, especially boys, both creators knowing just how to cater to their audience. There is something pleasing about the industry of the children as they fix up their canoe, the excitement of a pending adventure building as they relish their independence. Derib and Job also encapsulate family dynamics incredibly well, especially between tired and irritated spouses. The story has plenty of the usual Yakari charm and it has a fun spirit even with a slight awkward lurching to Job’s plot. An example is the relationship between Coyote and Crow. They emerge into a scene that is well illustrated by Derib, but you don’t actually realise they’re friends until Crow flies off with them to rescue Buffalo Seed a few pages later. Job has made assumptions that his audience immediately knows what is happening, but that assumption causes the story to falter.

Job introduces aspects of Native American legends surrounding Coyote that improve over the course of the narrative, but it lacks the grandeur of  earlier stories where Derib could make the nostalgia of childhood summers come flooding back in one giant panel. Here his art is more simplistic than usual, lacking those little intricate details that often balance the simplicity. There are some good moments though, particularly when the animals are in motion, Derib capturing even the little movements and gestures superbly. The artist uses more panels per page than usual which helps in some places but also prevents this from being magnificent.

While not the best of the Yakari stories to this point, there are soothing characteristics to Yakari and the Coyote that somehow still make for a pleasant read. Children like the vibrancy of the illustration and the dialogue engages them on their level. The river theme continues in The River of Forgetfulness.