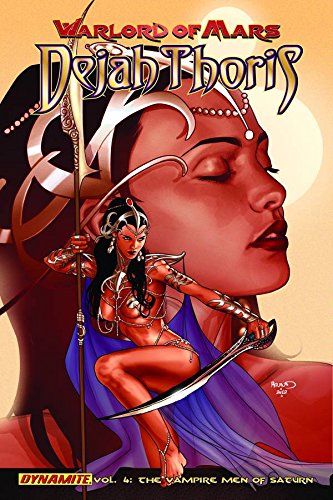 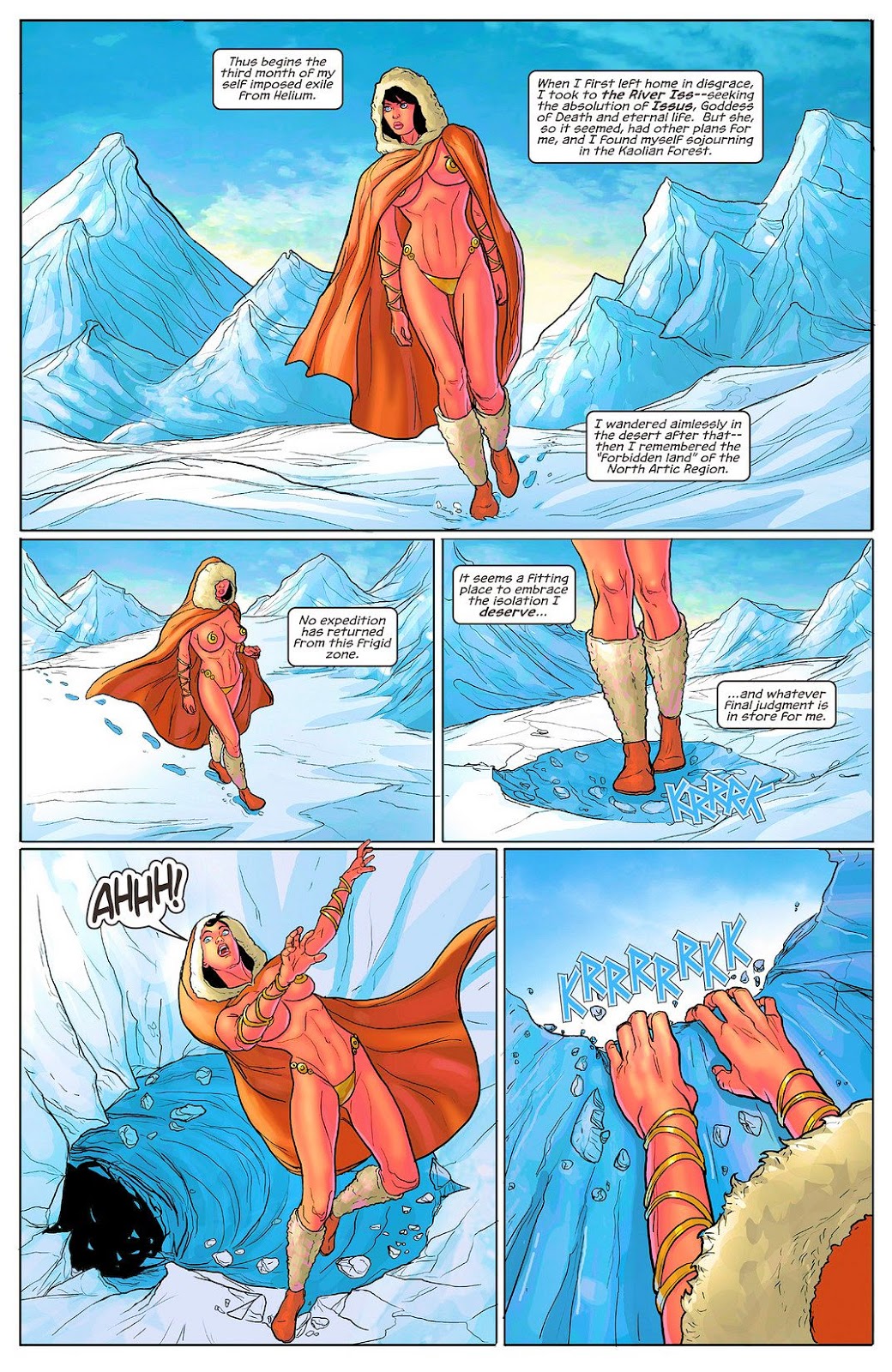 For reasons explained in The Boora Witch, Dejah Thoris considers herself disgraced, and in the opening chapter she’s left her father and grandfather and is wandering an icy land.

Where to begin with the lack of logic about Debora Carita’s sample page? Dissertations could be written. So, despite being a hardy warrior woman Dejah Thoris feels the cold, and when crossing the icy wastes it’s obviously best to conserve heat, hence the fur around the hood of a cloak otherwise kept open. Likewise, the best medical advice is to avoid heat loss through the shins in cold weather, so Dejah is sensibly prioritising the little covering she has to keep her shins warm. Even more laughably, a couple of pages later Robert Place Napton has Dejah thinking that without the fur she would have frozen to death, yet we’ve not seen that cloak closed in four pages. The cold appears to have induced a great stiffness in the way she moves and frozen her breasts into place, while despite the footprints, there’s no weight to her presence. The ridiculous contradictions of the art continue over the opening story. At one point Dejah is chained, but there’s a means of release on a table. She can reach the table, but not the device on it, so sinks back into despair rather than pulling the lightweight looking table toward her. The page’s final panel is supposed to be Dejah seen from above lying on the floor, but she looks to have been glued to a wall. It’s the way the art continues, Carita having a superficially attractive style lacking any foundation. Of course, Dejah Thoris readers aren’t going to care about that. They want Dejah in her regular next to nothing costume in submissive scenarios as often as possible.

Napton’s plot is generic fantasy, with vampires who ride dragons as well as piloting airships, the locals are farmed for blood, and any seasoned reader will see the surprises coming. The funniest bit is the vampire overlord lusting after Dejah not because she’s Playboy model perfection, but because her blood tastes so damn fine.

Presumably no-one buys Dejah Thoris graphic novels for the quality of the plot, and this gives readers what they do want. To avoid disappointment, prospective purchasers should be aware there are a couple of lapses in the second four part story where the near naked Dejah is off panel for an entire page. On the first occasion only aircraft and scenery substitute, which is patently unsatisfactory, but at least the second features squirming female victims begging not to be the vampire’s lunch. Rise of the Machine Men is up next. Or if you really must, this is collected in the second Warlord of Mars: Dejah Thoris Omnibus.