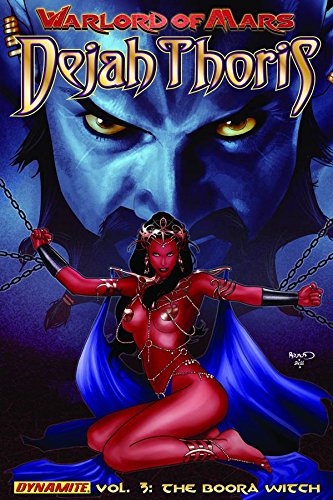 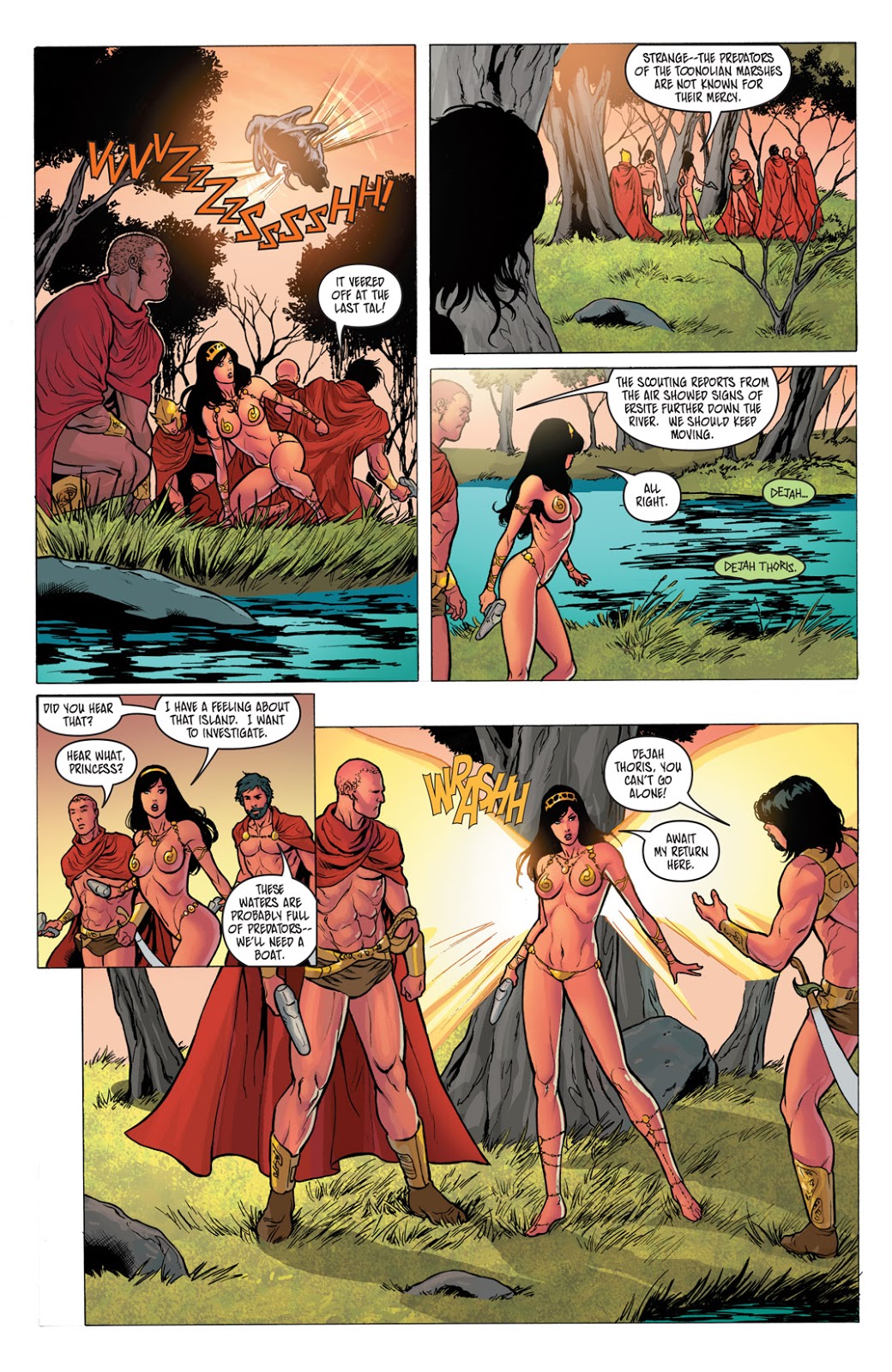 Edgar Rice Burroughs created Dejah Thoris as a supporting character for his John Carter stories in pulp magazines beginning in 1912. Because comics hadn’t yet been invented, pulp magazines were generally considered the lowest form of fiction, and that he’s still remembered over a century later indicates Burroughs knew what his audience wanted, and how to provide them with racy fantasy engagingly written. It can be discussed elsewhere whether a near naked warrior woman was his fantasy or intuition about what his audience wanted, but while writing about her there’s no need to mention she’s nearly naked in every sentence. However, transfer the character to comics and there she is in every panel. Like Burroughs, Dynamite know their audience, know what they’re doing, and that their audience will overlook the vast lapse of logic not so obvious in prose stories. However much people may be concerned about objectification of women, it’s a long learned lesson that anything with naked women sells, and the cover and Carlos Rafael’s sample art don’t lie about The Boora Witch.

Robert Place Napton takes over as writer, a post he’ll hold for the next five volumes, and his stories are more linear and straightforward than those of Arvid Nelson, who departed with Pirate Queen. Instead of Burroughs’ fiction Napton’s major plot is the type used so often in the 1960s Star Trek series. Dejah and her crew arrive in a strange land where the equivalent of dilithium crystals are to be found in quantity, so against all protocol Dejah goes exploring alone, and eventually discovers the home of someone very dangerous.

Rafael supplies a couple of hundred pictures of a pouting Dejah Thoris, first rate for the intended audience. She’s sometimes seen from behind casually leaning against the furnishings, or lying in bed naked, the sheet strangely covering more of her than her regular outfit does, or perhaps naked in a swimming pool. At times Rafael appears to have a crisis of conscience, wondering if he’s been too subtle, so will throw in a palace with phallic towers. If his art seems exploitative, it’s tame compared to Marcio Fiorito’s final story. He increases the size of Dejah’s breasts considerably, leading to some ridiculous drawings of her flying, and Fiorito’s a poorer artist technically, so what’s supposed to be an alluring picture of Dejah lying in bed looks like an experiment in stitching bodies together.

As silly as the title plot is, it’s also disappointing for anyone expecting that Dejah might sort out her own troubles. That’s left to a man, Kantos Kan, who does all the heavy lifting. Napton’s not convincing with the character moments either. Mind control is a plot element, but not as per two characters we know should be more than capable of escaping the circumstances they find themselves in. Too much is too convenient. The single chapter story that follows has some obvious moments, but it’s a better plot, if not always well drawn by Fiorito. What’s up next? Oh, The Vampire Men of Saturn.

Anyone feeling there should be a form of penance attacthed to reading of Dejah Thoris, has the option of buying this as part of the expensive first Warlord of Mars: Dejah Thoris Omnibus. Alternatively the see recommendations for graphic novels featuring actually naked women, along with sexual content and some wit and intelligence about them.