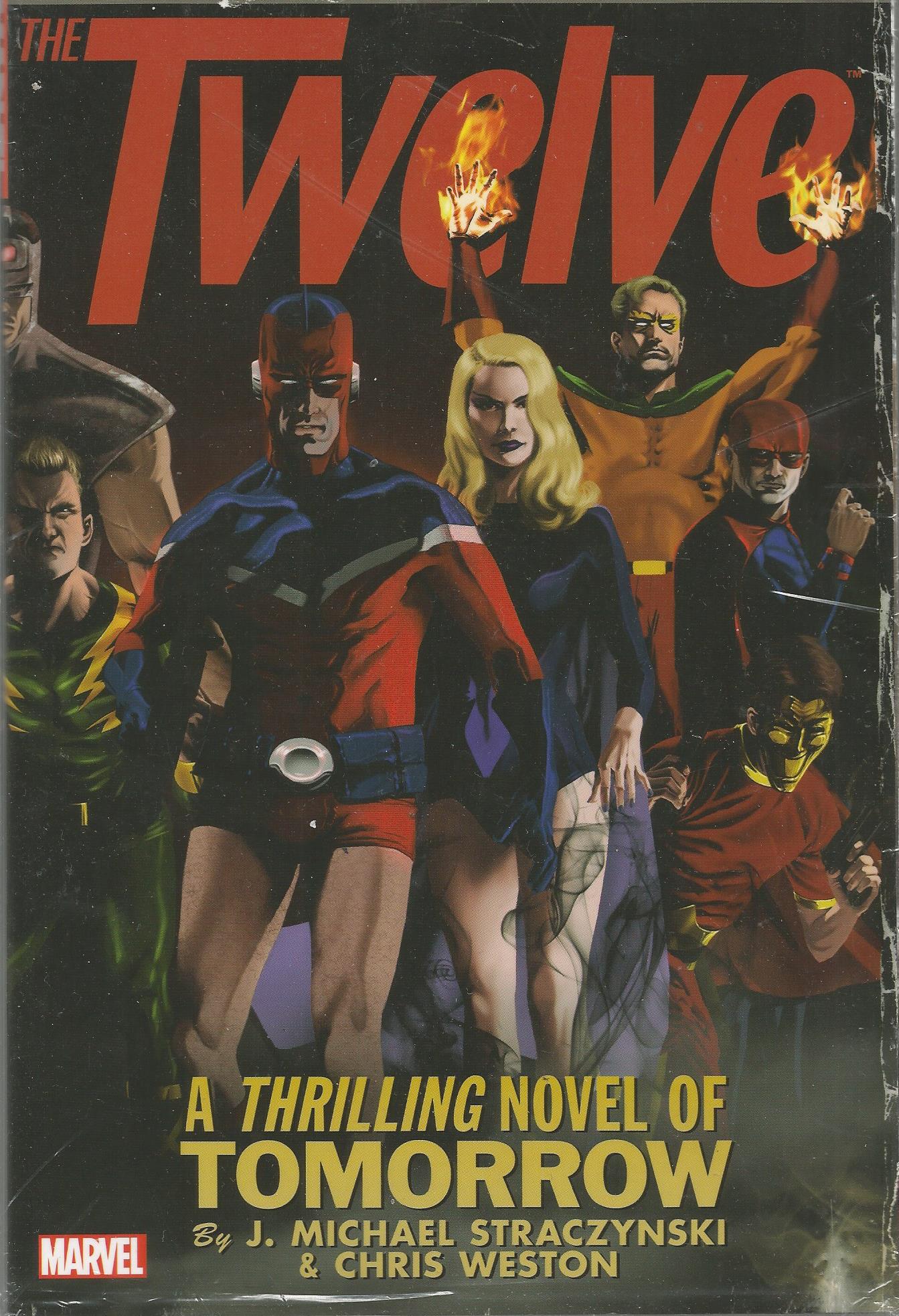 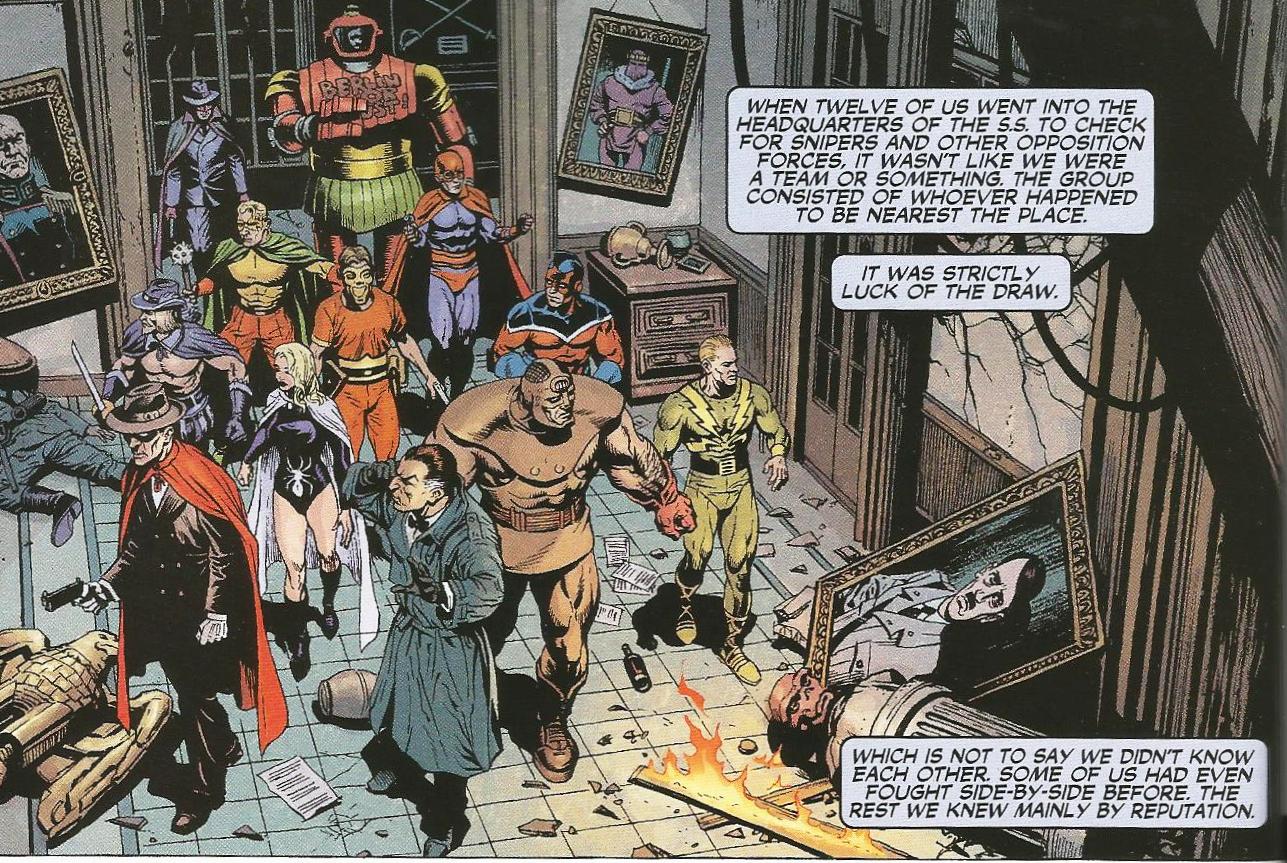 During the 1945 invasion of Berlin during World War II, every super-powered being was in on the act, and twelve of these  gaudily-garbed mystery men, are entombed in suspended animation by a Nazi trap. The German intent was to study the captives and duplicate their powers in soldiers of the Third Reich – but with the defeat of the Nazis, the sleepers are overlooked, sleeping for decades before being discovered and revived in the early part of the 21st century.

If the ‘awakeners’ had been one of the tightly-knit teams established in Marvel’s retro-continuity, such as the Invaders or the Liberty Legion, then bonds of camaraderie might have supported them through their massive culture shock. But these were a random selection of mostly unacquainted adventurers. Barely known to each other, and with their family and friends either decrepit or deceased, their view of the bright new world is pretty dark.

Our point of view character is the Phantom Reporter – no, really – a.k.a.  journalist Richard Jones, a self-described ‘tourist’ in heroism, one of many people who, without special powers, slapped on a mask to right wrongs. He copes with the culture shock by observing the reactions of his more powerful companions in this strange odyssey – and rapidly comes to the conclusion that they are falling apart. In some cases – Captain Wonder, who wakes to find his wife and children long dead – this is understandable. But others, such as the Black Widow or Rockman, are responding to phantasms, beings not visible to the mortal world.

In the ‘real-world’ history of Marvel Comics – Timely, in the 1940’s – apart from the Big Three of Captain America, Sub-Mariner and the Human Torch, very few series managed any form of longevity, and the line was filled with a medley of flips, flops and oddities, appearing between one to a dozen times before being forgotten. This gave J. Michael Straczynski, The Twelve’s writer, a rich field of blank slates. Revived and retconned with a whole new bag of twisted neuroses and dark secrets, the official histories of Phantom Reporter, Black Widow, Rockman, Blue Blade, Dynamic Man, Mr. E, Captain Wonder, Laughing Mask, Fiery Mask, the Witness, Electro and Master Mind Excello are cleverly contrasted with the reality of their previous lives. Never as squeaky-clean as the vintage tales would have had us assume, aspects of those lives , decades later, return to haunt them. And that’s before they start getting murdered…

Chris Weston excels at giving the characters distinctive appearances. Unlike the standard super-hero body types, where the costume and the hair colour are the only thing distinguishing, say, Captain America from Daredevil, Weston’s intelligent and detailed work leaves no-one in any doubt who’s on the page, whether they’re in costume or civvies.

On first release, the series was suspended mid-run, as the result of Straczynski’s stormy relationship with publishers – in a five-year span, he abandoned five or six different projects owing to conflict, sometimes returning to them, sometimes not – but the collected edition enables the reader to avoid the months of frustration that beset the original consumers. At one point, Weston was being considered to write, as well as draw, the remainder of the series, and a WWII-set one-shot with many of The Twelve’s cast, Spearhead, was produced as a ‘pilot’, in which Weston performed creditably. Had Straczynski not eventually returned to the title, the series might well have been finished satisfactorily. Spearhead is included in the paperback, as well as the usual selection of character designs and alternate covers. The story was also previously available spread over two volumes.

A clever and inventive refreshing of stereotypical, one-note ‘heroes’, this rewards both as a mystery and as a super-hero adventure.