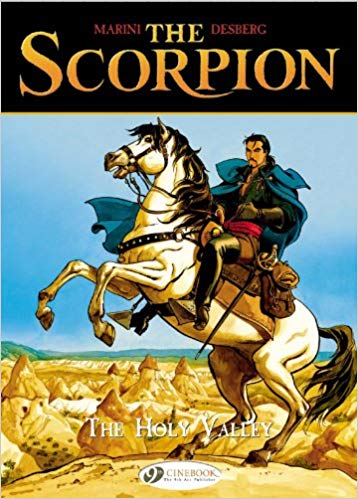 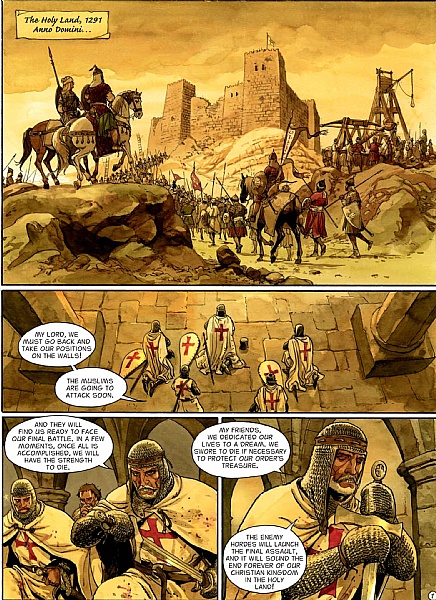 The next instalment of The Scorpion opens right after the betrayal seen concluding The Devil in the Vatican. Armando and Mejai are trapped at the hands of a 17th century torturer, accused of murder, while Rochnan, Trebaldi’s right hand man continues to hunt the heroes, while Ansea has a head start in the race to find the real St Peter’s cross. The Holy Valley continues to develop the characters, revealing little details about them that the readers must piece together. Trebaldi’s father and brother are also briefly introduced, and Rochnan employs rogues Ferron and his sister Fenice to help track the protagonists down.

Eventually their paths collide in Cappadocia where Gottfried, an old Teutonic Knight seeks to aid their quest to find the true cross. Despite Ansea and Rochnan working with Trebaldi, their interests outweigh the orders from their boss, as everyone vies for the power the cross brings. Rochnan is of particular note as more is suggested about his character. For the first time in the series he removes his mask, but his face remains unseen to the readers, only described through the sheer terror of the poor witnesses whom he kills seconds after. Stephen Desberg also continues to develop Mejai and the Scorpion’s relationship despite their general distrust and contempt for each other.

As with the previous graphic novels, Enrico Marini has a unique layout for each page with each panel delicately painted and filled with detail. From Ottoman rug designs, to fine patterns on the waistcoats of the Roman elites, to the grand sculptures littering the Vatican, these little additions show his artistic skill. Both Desberg and Marini keep readers guessing as characters new and old all battle it out to reach the treasure, and three volumes in it is still unclear as to who is good or bad, as more and more is unravelled. Just as Armando himself digs for treasures and discovers the bones of the past so too does the narrative unveil bit by bit, and like the delicate excavation of an archaeologist’s brush, the plot becomes deeper and deeper with every stroke. The Treasure of the Templars is next. 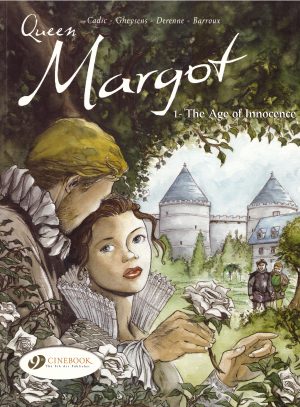