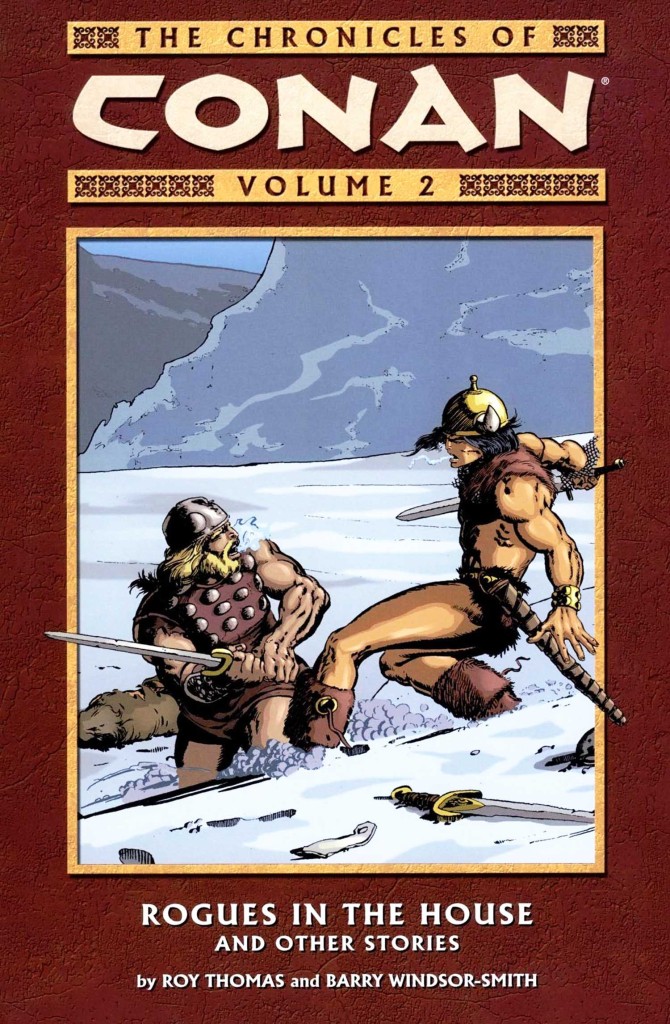 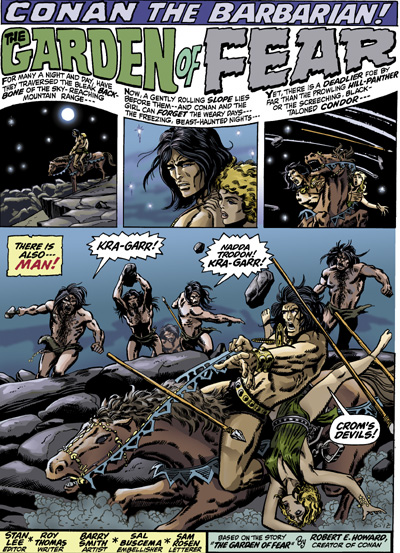 The second volume of The Chronicles of Conan collects another six issues Roy Thomas’ and Barry Windsor-Smith’s work on Conan the Barbarian during 1971 and 1972.

‘The Garden of Fear’ follows directly from the end of Volume 1, based on Robert E. Howard’s story of the same name. Conan and Jenna (featuring for a few more issues) encounter the last survivor of an ancient race who terrorises primitive tribesmen for a macabre ritual. Thomas emphasises that Conan is a man who takes his debts seriously and won’t leave someone behind even if the reverse is true. Smith’s anatomical proportions remain off in places, but there are a couple of beautifully rendered wordless frames (commonplace now, but unusual then) that capture the harshness of Conan’s world superbly.

‘Beware the Wrath of Anu!’ starts a run of tales set in an unnamed Corinthian city state, Conan meeting up with a Gunderman foe turned ally from ‘Keepers of the Crypt!’ (Volume 1). They engage in an impressive burglary spree, before betrayal and greed bring tragic consequences. This is fraught with emotion and the themes pushed the boundaries of what the old Comics Code Authority would accept. That it emerged uncensored is a wonder, as it’s still disturbing yet so sensitively rendered. Again Thomas captures Conan’s sense of honour towards his companions, Smith’s pencils really enhancing the sense of loss and betrayal. The moody and brooding atmosphere continues into the two part story ‘Rogues in the House’ (adapting a Howard story by the same name) and the ‘Talons of Thak’. These are good stories from which the suspense overflows.

‘The Dweller in the Dark’ and ‘Web of the Spider-God’ (plotted by John Jakes, creator of Brak the Barbarian) focus on mysterious creatures, Thomas and Smith convincingly capturing Conan’s quite human fear of the supernatural. The characters are developing well as recurring players move in and out to bring a regular continuity, Smith’s growing attention to detail intensifying the lush worlds and cultures Howard created.

The pair’s best work of the series so far is their adaptation of Howard’s ‘The Frost Giant’s Daughter’, a wounded and weary Conan meeting an ethereally beautiful woman who taunts him to catch her and win life. Originally produced for Savage Tales and chronologically closer to issue 1, Thomas and Smith re-worked elements rendering it suitable for reprint here. Technically Savage Tales was a magazine and so avoided CCA regulation, meaning they could feature nudity. That, of course, was not going to be acceptable in this format. Even so, the themes are controversial, and in his afterword Thomas muses on how they ever got away with it. Conan’s sales were unremarkable at the time and the comic skirted with cancellation, but sales rose after this issue. It is a hauntingly beautiful narrative that displays Conan’s human passions and questionable morality. Both disturbing and evocative, it adds a realism that readers were looking for in their comics. Thomas was beginning to capture the essence of this world, Smith’s work improving with leaps and bounds as more detail was added with every story. The excellent production quality of these volumes really highlights the progression.

Those familiar with the original issues will realise two aren’t reprinted. These are bumped to Monster of the Monoliths and Other Stories presumably as printing both parts of a continued tale would extend the number of issues reprinted to seven.

These tales are also collected in the Barry Windsor-Smith Conan Archives Volumes 1–2, while Marvel’s printing of Essential Conan exhibits the same material in black and white, and their Epic Collection The Coming of Conan is a more recent colour presentation.