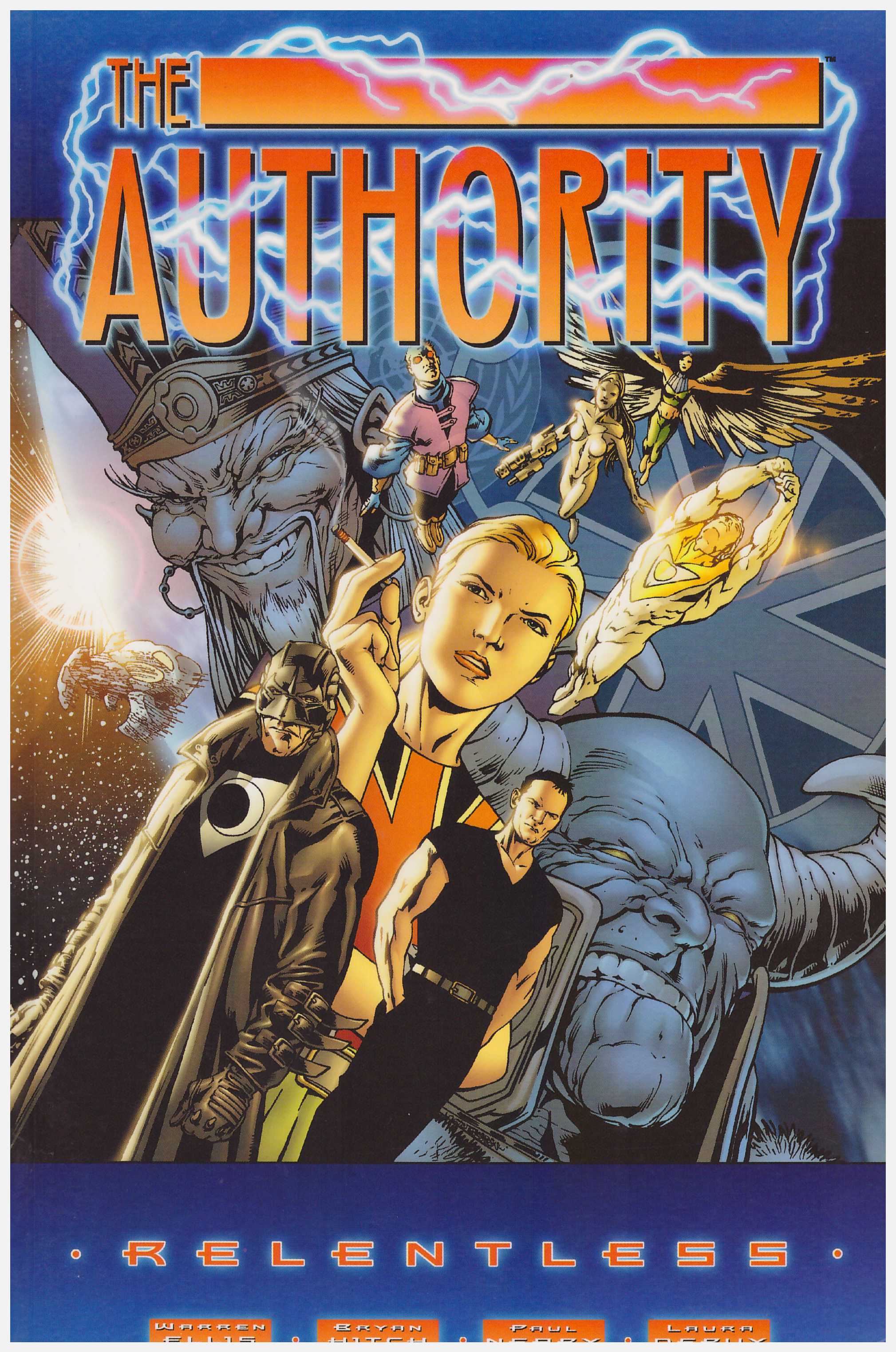 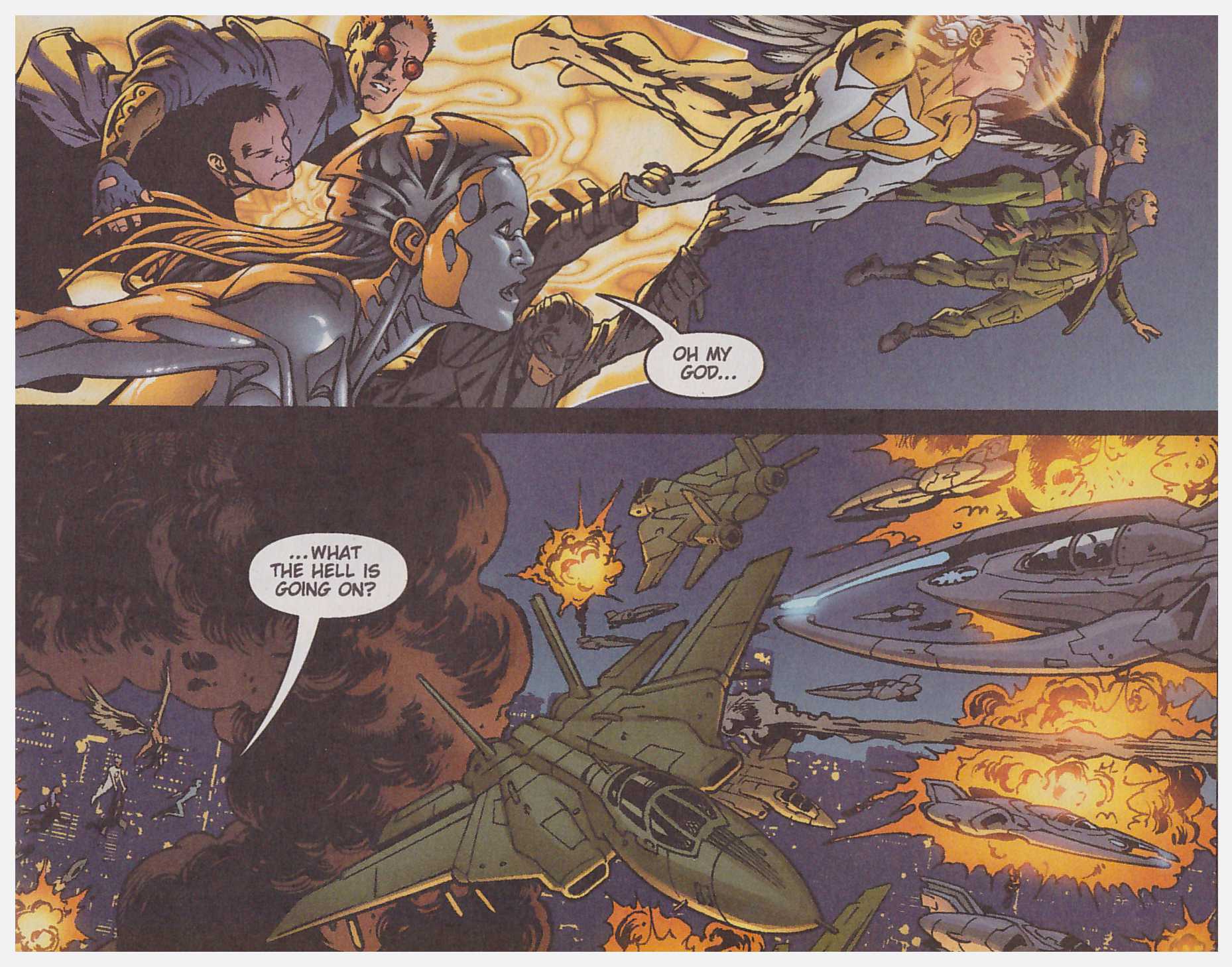 The new millennium’s superheroes arrived a year ahead of schedule in The Authority, which remains a pulsating redefinition of what superheroes could be and the scale on which they can operate.

Warren Ellis pulls the cast members he wants to retain from the dismantled Stormwatch, most his own creations, and to Apollo, Jack Hawksmoor, Jenny Sparks, Midnighter and Swift adds the Doctor and the Engineer, upgrades of two characters he’d previously discarded in Stormwatch: Change or Die. Having introduced an astonishingly powerful iteration of superheroes, Ellis then supplies them with a means to an end, the impossibly vast dimension-spanning living craft he names the Carrier. From there they can instantly materialise anywhere on Earth, and Jenny Sparks defines them in the opening chapter, responding “a higher authority” when asked who’s going to stop an incredibly powerful attacking force.

There’s a deliberate sensationalist provocation about The Authority, and a casual cynicism about the team’s interaction, yet whereas for much of his pre-Stormwatch superhero work Ellis had come across as the schoolboy attempting to shock, the visionary scale achieved here cements the deal. His case is that political compromise stalls effective protection, and emboldens the predatory, and so he sets the Authority above everyone, literally and figuratively.

Jenny Sparks might be narky, but when the alternative is a beast who proclaims “I am Regis, Warrior King of this entire filthy planet and I will wipe myself with your skin when I’m done violating yours”, who are you rooting for? Yes, it’s arch, and an underlined black and white vision in bold, but it presents a thrill long absent from shades of grey super-villainy justified by a deprived childhood. Kaizen Gamorra and Regis have no morally redemptive qualities. They know what they are and revel in it, Gamorra arrogant enough to engrave his company logo on the face of the planet. Regis rules an other-dimensional version of the United Kingdom and his race faces extinction unless they can find more women to mate with. Their means of doing so are appalling. Gamorra and Regis need a little slap, and in the absence of Ray Winstone (probably at the bookies), the Authority are there to provide it.

A bold new vision for superheroes operating on an amplified scale required an equally inspired artist, and while he was getting there on Stormwatch, it’s on The Authority that Bryan Hitch discards the shackles of his previous influences and embraces his current go-to status of the artist for blockbusters. His Apollo is Michelangelo’s heroic ideal, his Jenny Sparks braces and boots Eastenders chic, the Doctor and the Engineer other-worldy. The action swoops off the page and the attitude is nailed to it.

Modern era superhero comics started here. There’s little meaningful characterisation amid the adrenaline rush, but it set the tone for the blockbuster sensibilities of present day superheroes: idea packed and accelerating so fast over the surface gloss that the finer detail is irrelevant.

For the wealthy enthusiast the Absolute Authority gathers this and the Ellis/Hitch ‘Outer Dark’ tale from Under New Management. It presents the material on oversize glossy paper stock within a hardback enclosed in a slipcase along with an annotated script of the first chapter from this collection. The same stories are now available as The Authority vol 1.