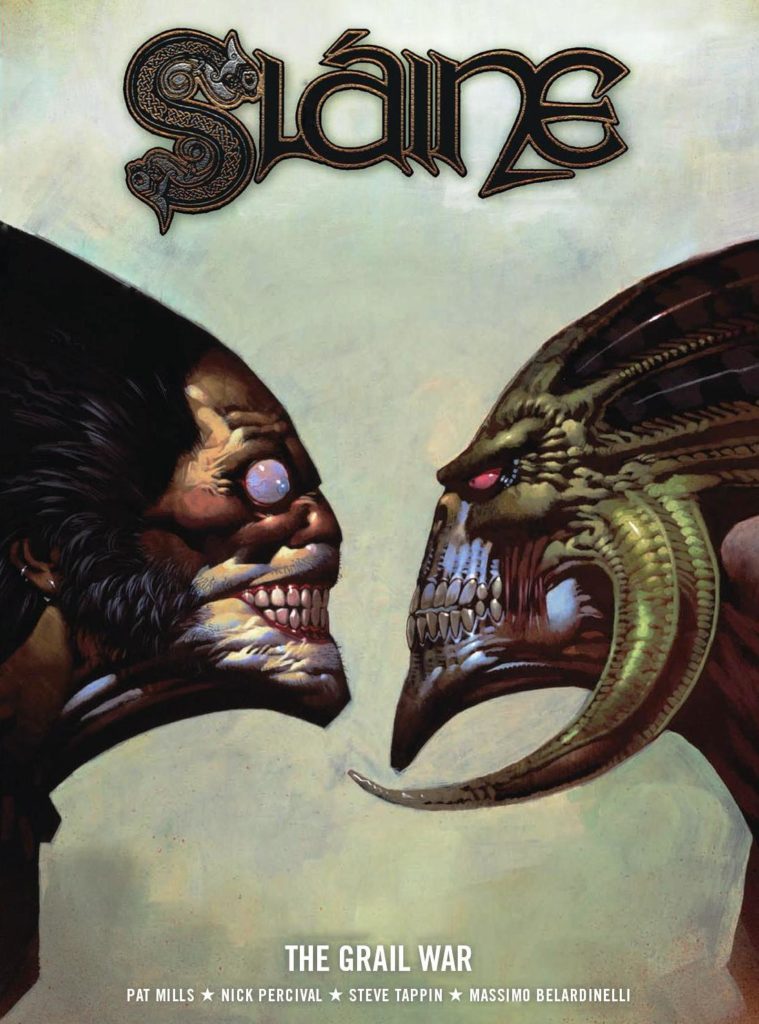 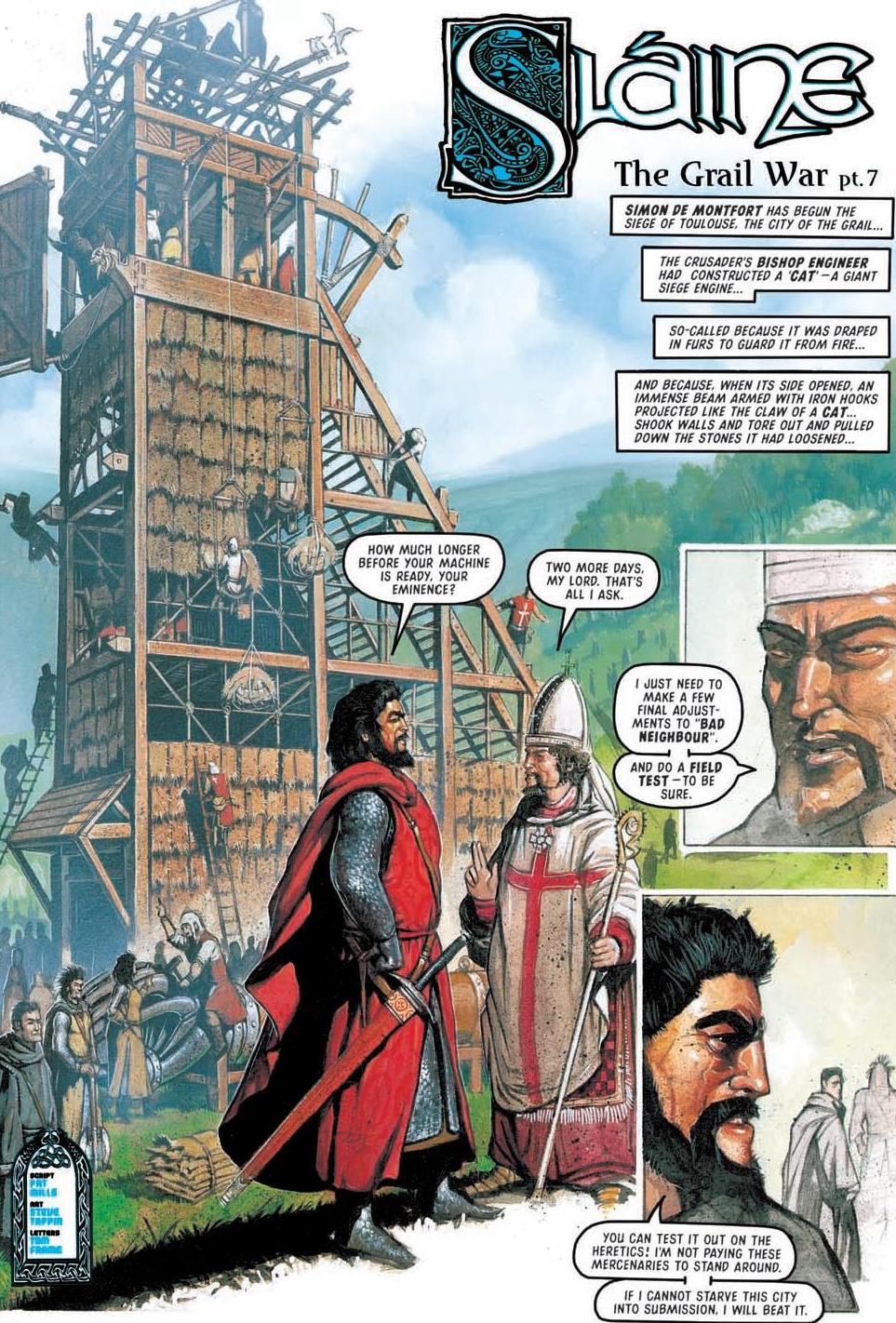 Time-tossed warrior Sláine and his companion Ukko are led by the Earth Goddess Danu in search of the Stone of Destiny (introduced in Sláine: The King). Through the glens of Scotland to storming French castles, Sláine faces foes ancient and new. In The Grail War there are no enemies he fears or can’t slay, yet matters of the heart may undo it all.

Sláine’s creator/writer Pat Mills has a knack for taking historical events and devising interesting alternatives. Sláine is peppered with examples, and to use a tired cliché, if it ain’t broke why fix it? In ‘King of Hearts’ Sláine assists William Wallace in a quest to find the Lia Fail (Stone of Destiny) with his auld enemy the Cythron doing likewise. There are obvious similarities to Braveheart, the Mel Gibson epic about Wallace from 1995, but there other events to bear in mind. When this tale was written the real stone of Destiny had only just officially been returned to Scotland, and its 1997 publication coincided with the historic referendum to create a new Scottish Parliament. ‘The Grail War’ then  captures the resurgence in Scottish patriotism at the time, while featuring more demonic steeds than Gibson’s version. Mills lived in Scotland for a time and knows the people, so his Wallace’s mannerisms and attitudes make him feel more Scots without the need for stereotyping or dodgy accents. Nick Percival illustrates using bright colours and smudged lines infused with a classical fantasy art element, something he would use as an illustrator later for both World of Warcraft and Magic the Gathering. He is great at the gory violence and grotesque imagery, ideal for illustrating Wallace’s execution, and it is the best story of the book.

‘The Grail War’ and ‘The Secret of the Grail’ revisit both the Sláine/Niamh time-crossed lovers and Cythron invader ideas. Sláine and Ukko are still searching for the Grail, their quest leading them to France where Simon de Montfort (based on factual Fifth Earl of Leicester) is leading the Crusade against the Cathars. Unlike previous stories, the lines between the right and the wrong blur. Is de Montford the hero and the Cathars righteously misguided or the reverse? It plays well for an ambiguous character like Sláine but the plot meanders, propped up by story elements best left excluded. However, two plot devices are brilliant! One is a twist to character relationships you won’t see coming, while the other is Ukko taking up more stage and playing to his strengths. You know: blackmail, bribery, thievery and spying.

Steve Tappin is the primary artist here and on opening tale ‘The Demon Hitchhiker’. His first Sláine art was in the preceding Treasures of Britain, and he’s inconsistent to say the least. He varyied from disappointing to frame-that-page quality, excellent in presenting the grand and small (see sample), but less so in-between. Give him a dragon or demon to draw and he’s genius. His representation of Ukko is the best of all Sláine’s artists, giving his ugly mug every expression conceivable. ‘The Battle of Clontarf’ drawn by Massimo Belardinelli ties in with second book Time Killer. Stylistically it is clearly 1980s but the now coloured array of assembled warriors and creatures are still spectacular.

Mills’ opinions on religion often feature in his work. Sometimes it works, but here it gets in the way, his opinions dominating over the intended storyline. The mixed artistic quality also does it no favours. Read it for ‘King of Hearts’, to marvel at Tappin’s Ukko and envy Mills’ ceaseless supply of ideas. Sláine returns to Ireland in Lord of the Beasts. 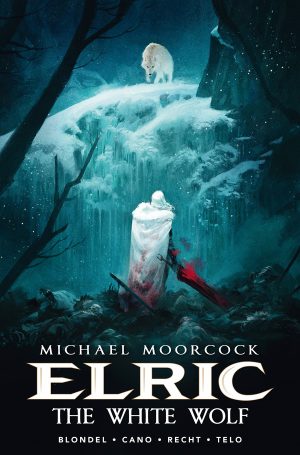 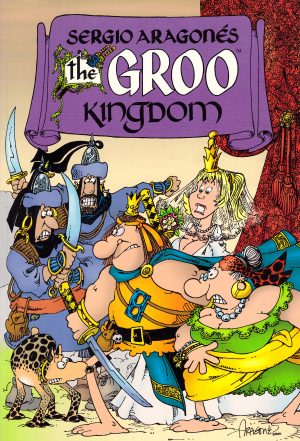