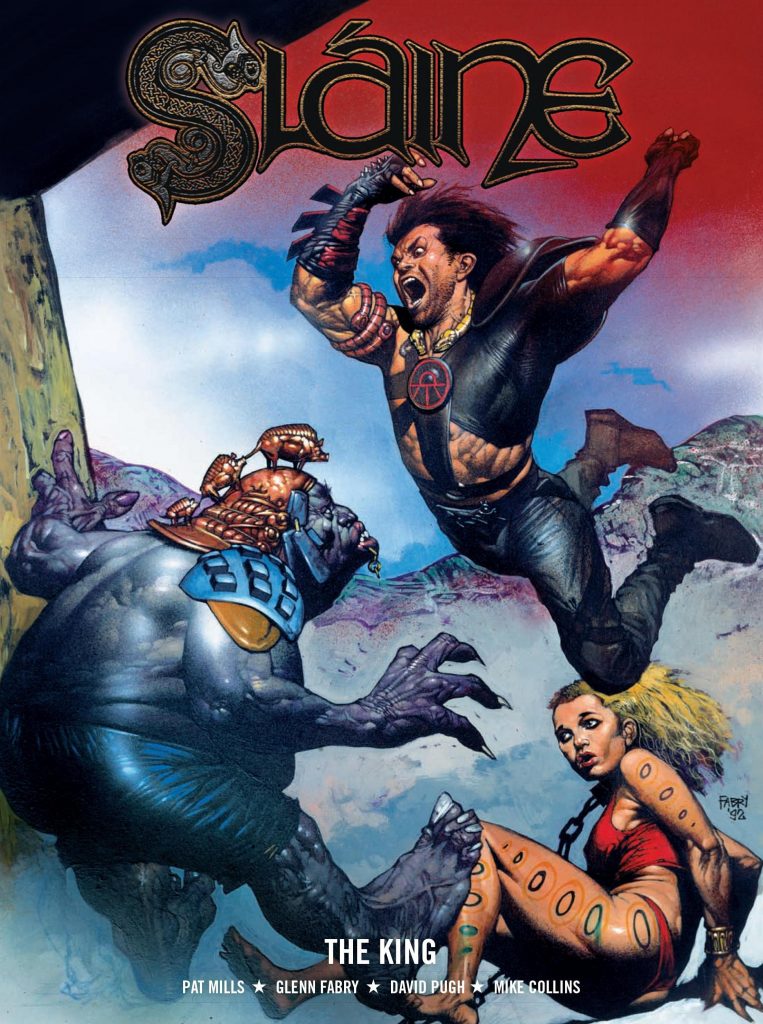 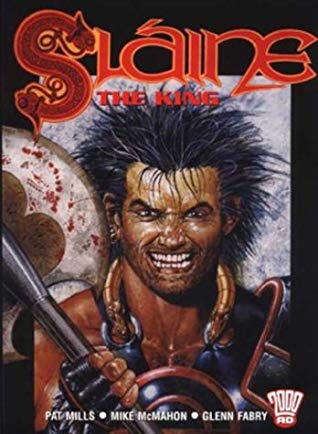 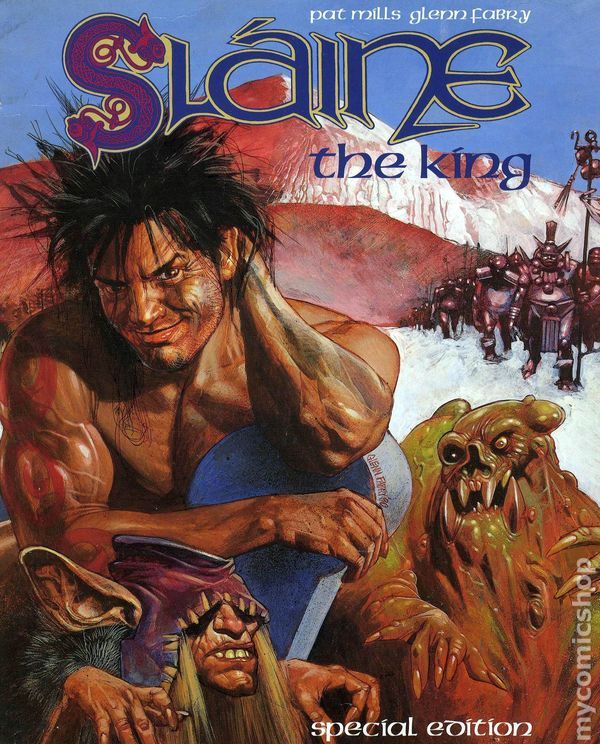 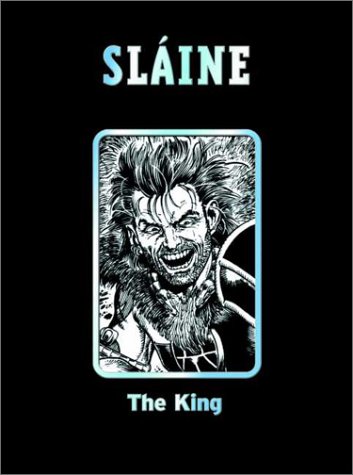 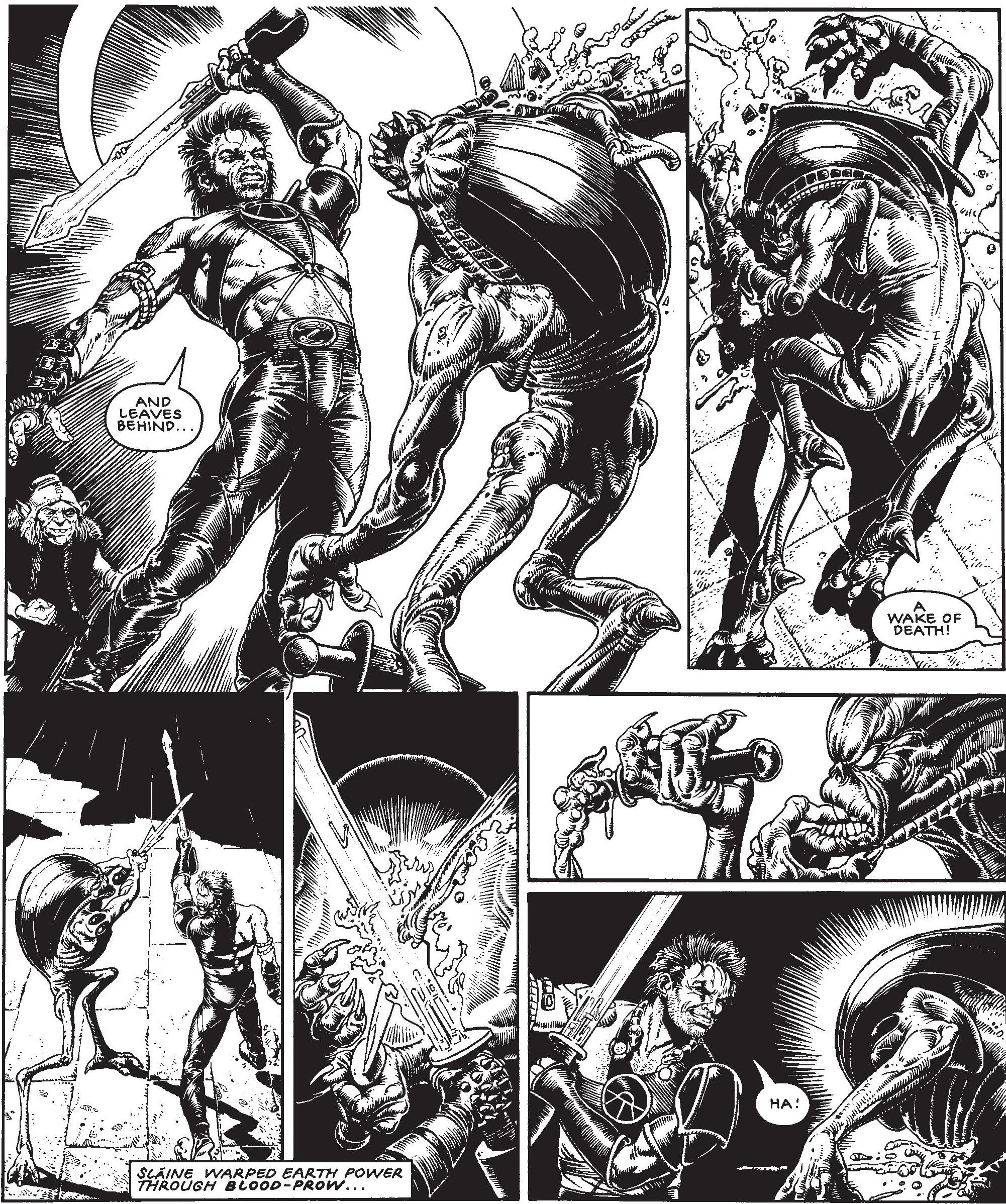 Sláine: The King is the third collection of 2000AD staple Sláine, by Rebellion at least. Titan published it in various formats from 1990, among them The Collected Sláine and a hardcover Special Edition (although that was just Fabry’s work along with Mike McMahon’s from Warrior’s Dawn). This collection presents the conclusion of Time Killer and is the last of the series to in black and white.

In his introduction creator Pat Mills comments that to keep up with Sláine’s growing popularity he took a blockbuster film approach to scripting. A result is neater plots, frenetic action and a number of popular film references like Ghostbusters that give the conclusion of Time Killer an upbeat tone in ‘Tomb of Terror’. The plot is overly silly at times, but after the hard slog of the previous volume it ends the saga on a fun note. Time Killer is a clumsy mesh of sci-fi and fantasy, Mills succeeding better with Nemesis the Warlock, but it does define where Mills should go with the series. Glen Fabry renders a spectacularly detailed opening sequence showing Sláine and his companions attempting to escape the inter-dimensional Cythron’s homeworld as the high ranking Grimnisimal stirs from its slumber to wreak destruction on all dimensions. David Pugh picks up a few chapters, with the main difference between the two the way Pugh uses shade and contrast. There are strong horror elements throughout, both artists showing a flair for rendering brutality. Both have also developed significantly since their debuts on Sláine, though Pugh as the faster worker features more, his art suffering slightly. The result is Fabry’s work looks more refined because he had far more time to draw his chapters.

By the start of ‘The Spoils of Annwn’ Mills knows exactly where he’s going with Sláine and it feels like a unique fantasy within a growing fantasy world. What makes it that way is Mills’ vast research into Pre-Historic Britain, developing ideas around the ancient standing stones peppering the countryside and the pagan origins of Glastonbury. It’s beautifully rendered by Mike Colins and Mark Farmer, to the point it makes you wonder whether it was really like this. Double pages and close-ups engage the reader in the intended mystical experience, their work continuously detailed with a touch of the macabre in an interesting interpretation of Celtic beliefs. Mills’ interpretations of these rituals is engrossing, hypothesizing that everything about Glastonbury Tor was built to overload the senses to create a sense of the supernatural.

‘Sláine the King’ is the apex of the book, Sláine heading to his tribe to become their King and help fight the Fomorian invaders, carrying an ancient treasure called the Cauldron of Blood. Fabry illustrates the mutated Fomors with incredible creativity, he and collaborator Nick Williams delivering some fine fantasy art, from depictions of brutal battles to simple meetings around the council, Fabry very effective in a wordless tale by Angie Kincaid. Mills toys with Celtic legends and what is known of the ancient culture to deliver a captivating society where a king reigns only for seven years, running sky-clad (naked) into battle and including women as equals within their councils.

Sláine: The King is better over the second half, less bogged down by the sci-fi narrative from Time Killer. The improving art helps texture interesting characters and a rich world combined with high levels of fun mixed through with dark drama. It sets the scene for The Horned God, a beautifully painted volume that cemented Sláine’s status as a 2000AD icon.