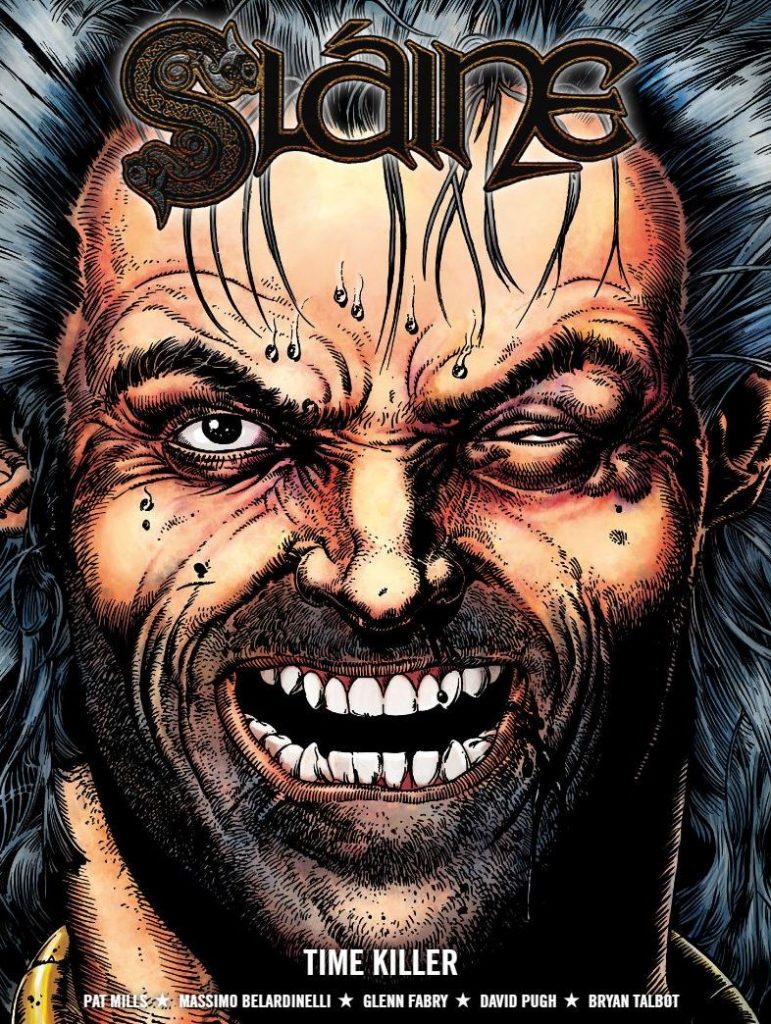 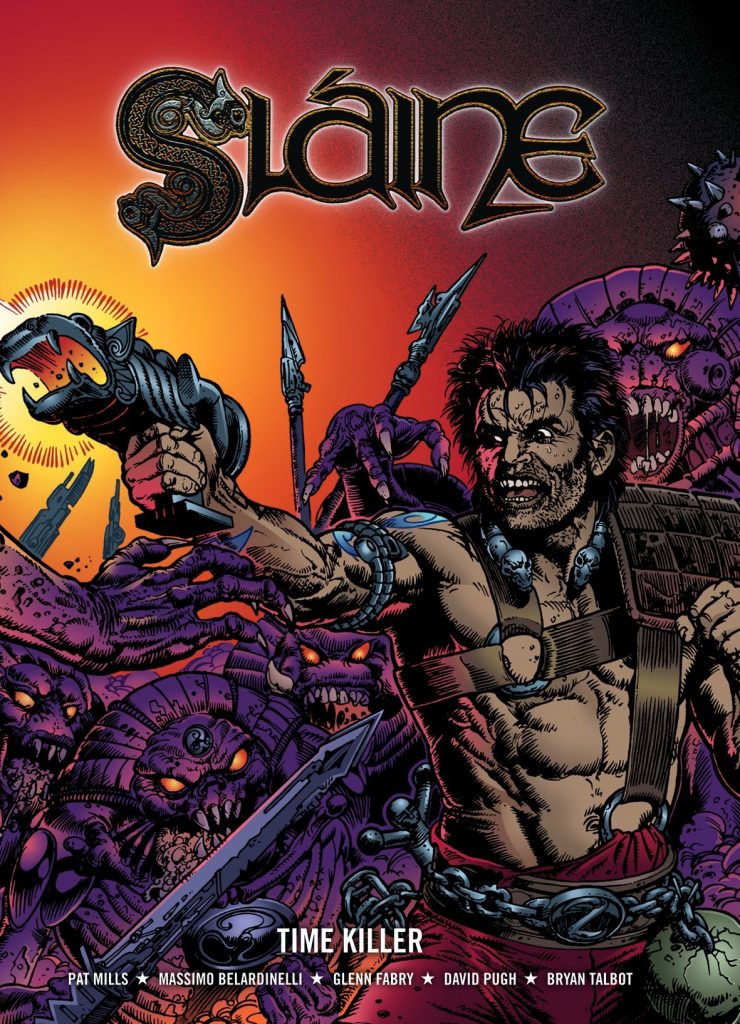 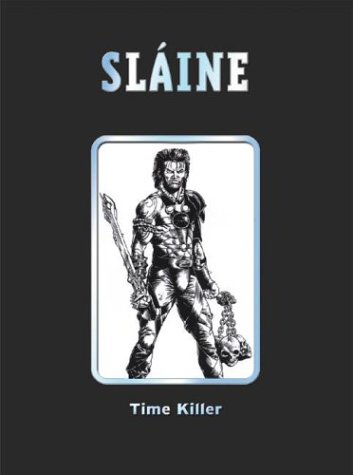 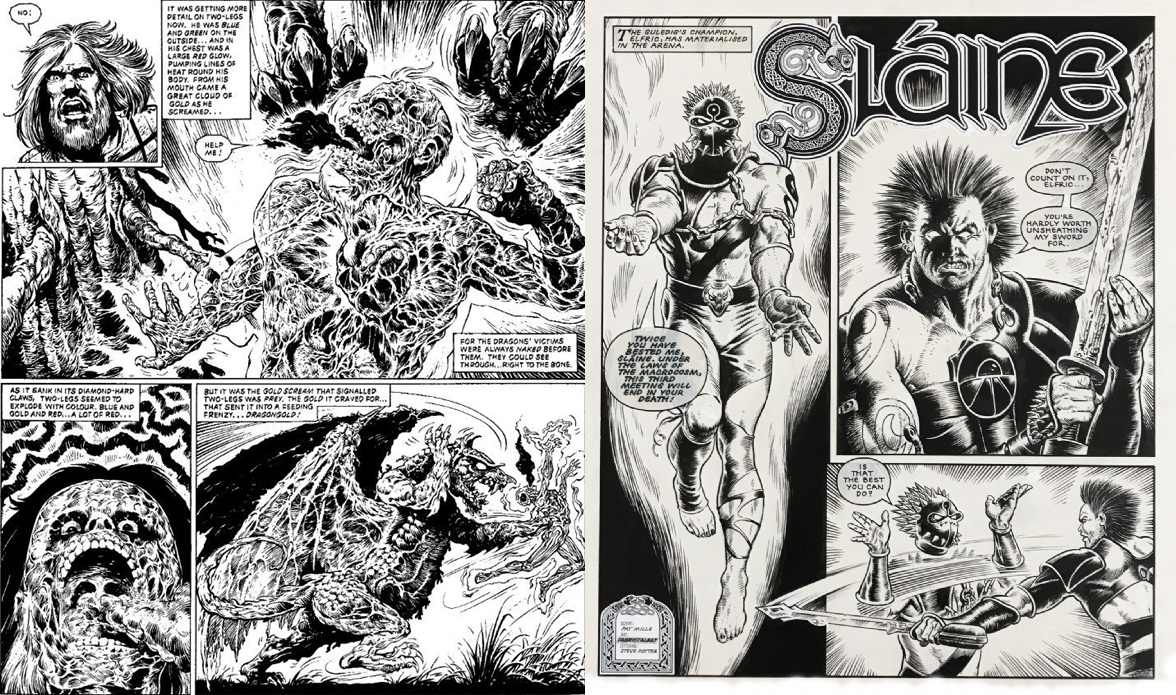 Truths about Pat Mills’ Sláine are that it features some incredible artists, both in their prime and in development, and it is one of the most robustly researched and imagined fantasy sagas conceived. As coarse and flawed as they are, both the hero Sláine Mac Roth and his toady Ukko are likeable, their development progressive and well rounded, though that has come through a process of learning. Continuing from Warrior’s Dawn, this second collection is proof of that process, a lengthy collection compiling two storylines that introduce artists Glenn Fabry, Bryan Talbot and David Pugh to Sláine. Time Killer demonstrates how Sláine and Ukko developed, introduces influential characters and has Mills experimenting with a little genre blending. It’s a book with some fine moments of writing and art, but also of developing artists and trying many ideas that don’t always work on the way to crafting a legendary character in British comics history.

The first storyline ‘Dragonheist’ is illustrated by Italian artist Massimo Belardinelli, already active on Warrior’s Dawn. His classic European format was very popular, and this story of dragons, blood feuds and betrayals is impressively detailed (see sample art left). Illustrating sections from the dragon’s perspective to demonstrate how its vision works is inspired, as is the introduction of the Fomorians, a race of beings intent on dominating Tir Na Og. It’s a brutal narrative that Mills scripts, in no way romanticising a harsh world, but artistically it looks typically 1980s with the human cast posed and a little stiff. It hasn’t aged well then, yet still features intricate settings and creatures to blow the mind.

The titular ‘Time Killer’ is the beginning of a sprawling fantasy/sci-fi alternately illustrated by Glenn Fabry, David Pugh and Bryan Talbot (sample art right). It’s an imaginative treat from the inter-dimensional Cythrons to their lackeys the Diluvials, and the cities of the Ever-Living Ones. Sláine is recruited to help the Ever-Living Ones, led by the mage Myrrdinn, to overthrow the evil Cythrons who wish to wake Crom and corrupt the Earth Power that binds Tir Na Og to the people. Placing the series within the structure of the mythological Celtic Cycles facilitates Mills’ experimentations with genre mixing. He’s clearly revelling in the creativity it engenders, using simple ideas like thumb print recognition while producing irreverent one-liners and quips inspired by 1980s action films. It isn’t only Mills going Hollywood, some of Fabry’s characters resembling action men Dolph Lundgren and Michael Dudikoff. His engaging style and energy elevates the story to levels of fun absent from Belardinelli’s work, helped by Talbot in a chapter called ‘Warp-out!’ Pugh uses softer lines which aren’t as effective on facial expressions but do facilitate finer details on armour and clothing. His buildings and cityscapes,  based on real-world places like Skarabrae, are simply fantastic! You can envision Sláine’s world existing in another time based on that alone.

In most cases Time Killer’s art is very good, the monstrous inhabitants and vicious inter-dimensional beings the highlight, but as mentioned it all a work in progress. In building back-story Mills needs a lot of info-dumps, and reading becomes a slog. Curiously the extra information both improves and hampers Time Killer and Mills’ writing is very confident. However, you do need to read this moving into the third volume Sláine: The King, so why not enjoy the battles, the rambunctious humorous adventure while witnessing the development of some brilliant artists.

Time Killer was  previously published by Titan Books in collectable hardcover copies that can still be found.