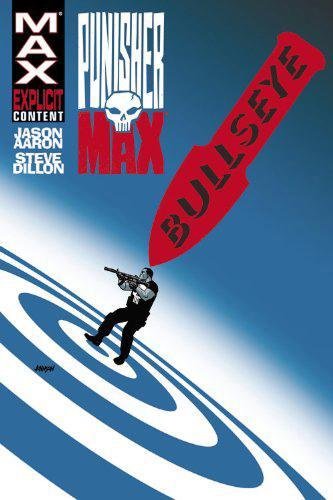 Jason Aaron and Steve Dillon’s Punisher steps away from the regular Punisher continuity to present a complete story over four graphic novels featuring an alternate version of the character and his crusade against crime. In practical terms this makes very little difference, the Punisher is who he is and the best at what he does, and we revel in the comically portrayed violent excess.

Plenty of that is provided in an opening chapter in which we’re shown Bullseye at work and then negotiating terms for killing the Punisher. “I once tracked an Eskimo huntsman on foot across 200 miles of Arctic tundra”, he boasts, “and killed him with nothing but an icicle made from my own frozen feces”. “Who in God’s name hired you to do that?” asks the Kingpin. “No-one”, replies Bullseye, “I did that for fun”. It’s brutal, funny, succinct and tells you everything you need to know about Bullseye even if you’re completely unaware he’s been the Kingpin’s hitman of choice in Marvel stories for decades.

As was the case with Kingpin, the Punisher is almost a supporting player, but ever-present via fear, or in this case reputation, as Bullseye is an equally implacable and fearless assassin, only hiring his services to criminals. The crux is Bullseye wanting to know the Punisher before killing him, which is Aaron’s way of theorising about him, or more accurately presenting what he is, as all Bullseye’s investigations tell Punisher fans nothing new. When the Punisher first appears Aaron emphasises how his war on crime has taken its toll. His doctor runs through the physical symptoms, but these lead to the mental toll. A Punisher aware he’s not at his peak is a vulnerable Punisher, and that’s the seed of doubt Aaron sows. Dillon defines this well. Because he’s so good at the comedy violence it’s possibly not appreciated how subtle he can be. The sample page concerns the possible vulnerability, Dillon breaking it down very efficiently while giving Frank Castle an unusually contemplative air.

Bullseye doesn’t quite match the creative success of Kingpin as it’s repetitive. Aaron stretches out Bullseye’s eccentric psycho act for too long before the payoff, presumably as a certain number of chapters constitute a graphic novel. It does eventually have a purpose, actually a twisted, grim purpose, but that leads to a scene where Bullseye bears his soul. It’s cleverly set up, yet unconvincing, although it could be read as faked along with so much else about Bullseye.

Ultimately, Bullseye is enjoyable, but less would have been more. There’s a cliffhanger ending to lead into Frank, although many readers will probably figure out for themselves what Aaron’s left dangling.

As an alternative to this individual graphic novel, if you have the money all Aaron and Dillon’s collaborations are collected in hardback as Punisher Max: The Complete Collection Volume Seven, which is largely a reprint of the earlier Punisher Max Omnibus. As they’re all good stories, that’s worth considering. 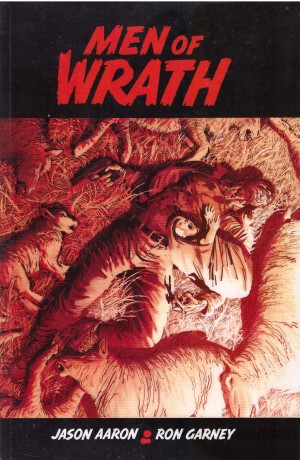