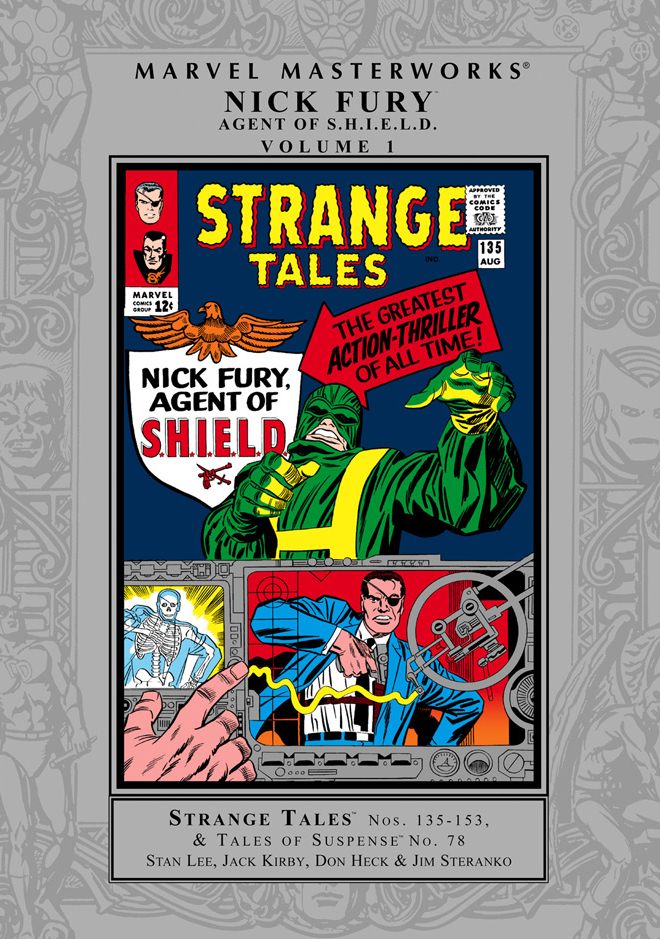 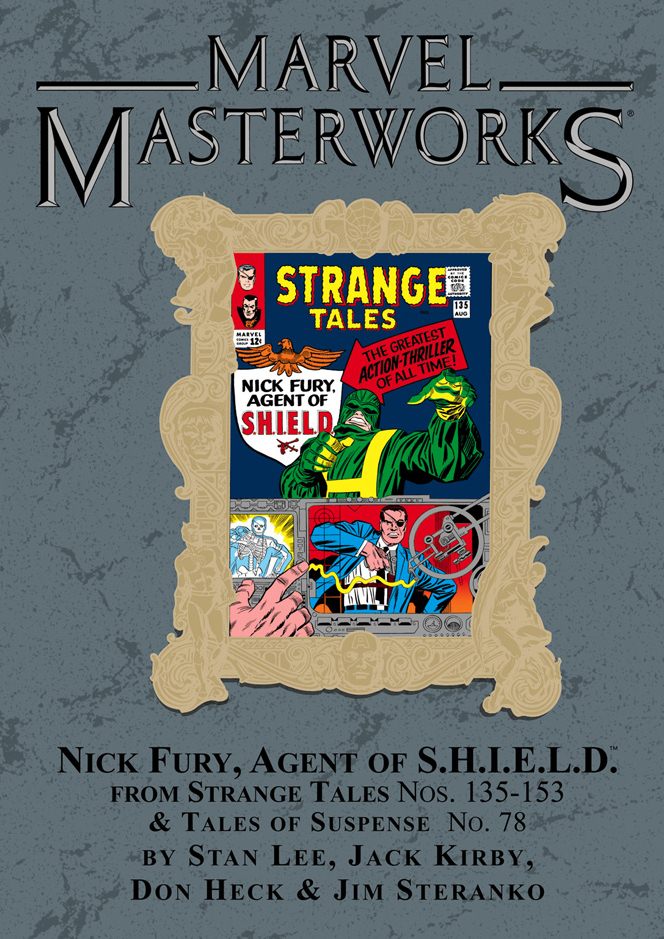 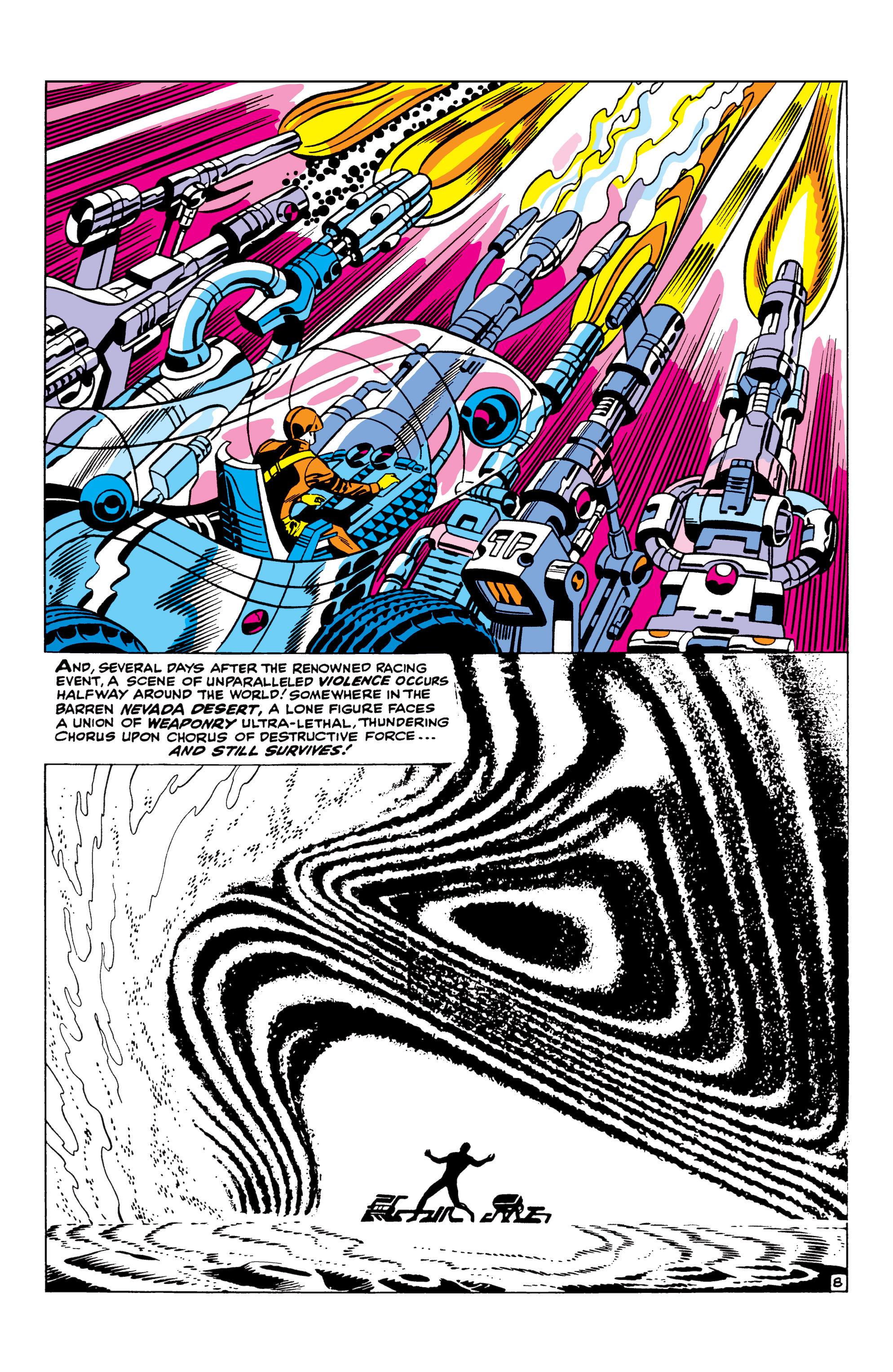 The first Nick Fury: Agent of S.H.I.E.L.D. Masterworks collection displayed the germ of a good idea in updating the hero of Marvel’s World War II comic to the spy culture of the 1960s, but it somehow never gelled. It took a new eye making an appraisal and a new approach.

Nick Fury’s super-spy strip had been rumbling along for eighteen months but Stan Lee and Jack Kirby, such an alchemical partnership elsewhere, never lifted the strip above page filler. It took Jim Steranko to give it wings. Given the reputation of his work, it’s surprising to see this was a gradual process. He’s first only appointed as artist, and not trusted to map out the story himself, so worked from Kirby’s layouts. As seen throughout the book, one facet of his remarkable artwork has a direct genesis in Kirby’s imagination. A success of the strip before Steranko was the fantastic and complex designs Kirby brought to the futuristic machinery, and Steranko excels at these.

A crucial element of Steranko’s appeal is that he also coloured his artwork, decades ahead of his time in making S.H.I.E.L.D. stories look like no other with their vibrancy several months before he began experimenting with the page designs. Those are the foundation of his contemporary reverence. Steranko siphoned influences from art he admired with style as his filter. James Bond films and those of Burt Lancaster, the 1940s comics of Will Eisner, the pop art of Peter Max, and the modernist interior designs of the 1960s are moulded together with Kirby and appreciation of the abstract (see featured art). It all distanced Steranko’s work further from the comics surrounding it on the newsstands and his influence is traceable down the decades. There’s an awkwardness to his figures when not moving that never entirely disappears, but an early problem with them lacking a sense of density is dealt with.

Looking at the art there’s a desire for the stories to match this visionary insight, but they lag well behind. It’s ironic that the cinematic pause became an artistic touchstone for Steranko’s work as it takes a long, long time for him to realise he doesn’t need Lee’s verbosity and let the art tell the story. He catches onto the episodic requirements quickly enough, but all too often adventure reel escapes are employed. He expands the cast from the faceless S.H.I.E.L.D. agents he inherited, but no-one’s dialogue transcends the expository and the mundane. The most visually impressive experimentation is with the final ten page strip, yet it’s dragged down by a villain using lines like “It had to be done, for they discovered my secret! No-one must know before my mission is accomplished!” Fury’s no better, explaining every move as he makes it.

The strip finally becomes the masterwork so fondly remembered when the page count expands, but only half of Steranko’s work on these is here, the remainder collected in volume 3. The work is available in other collections. The shorts are found in paperback as Nick Fury: Agent of S.H.I.E.L.D. and the remainder in Who is Scorpio? The best value is provided by The Complete S.H.I.E.L.D. by Jim Steranko, but for those who can afford real luxury Steranko’s work is collected with that of the creators who preceded and followed him in the oversized S.H.I.E.L.D. Complete Collection Omnibus.