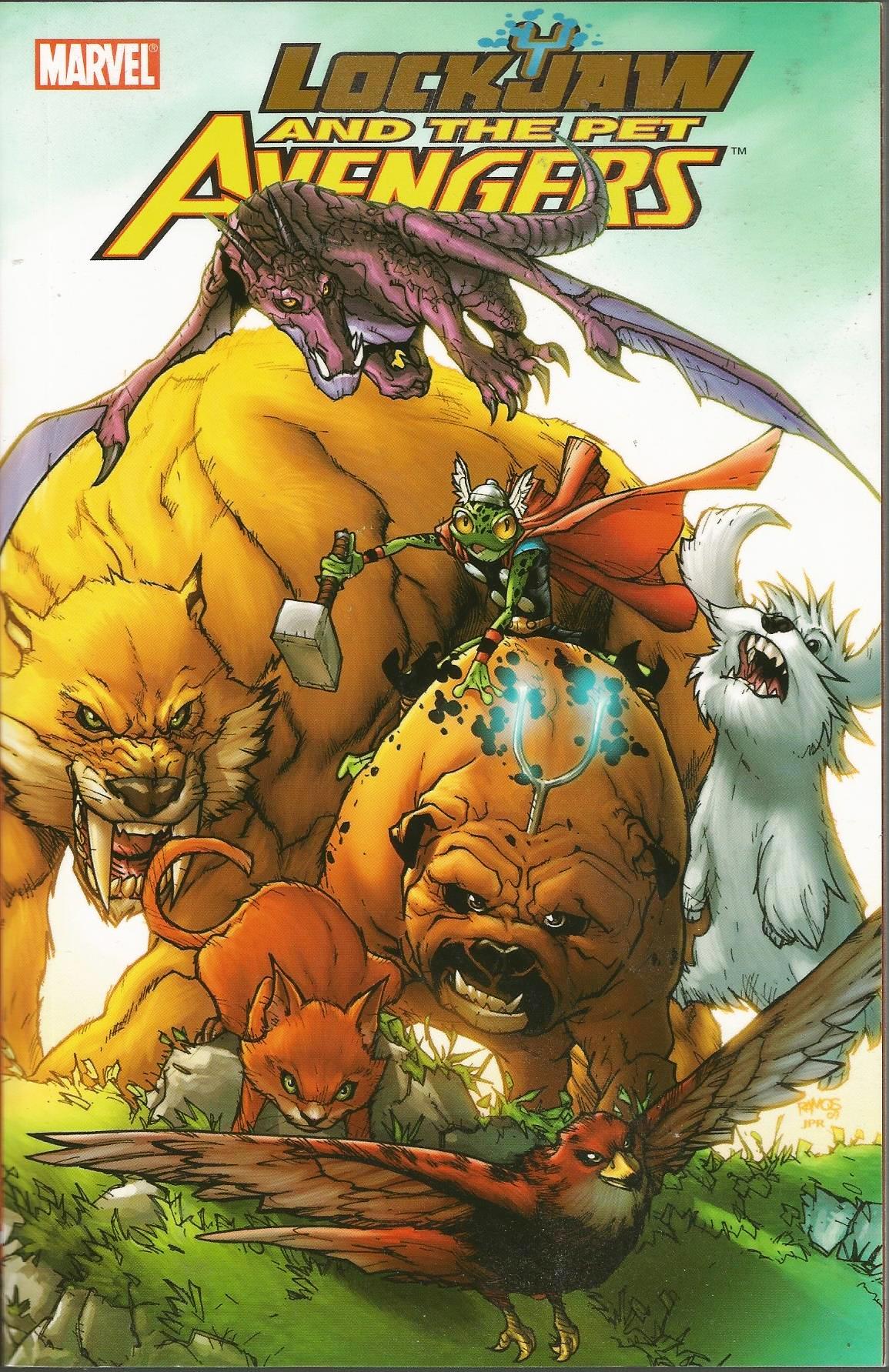 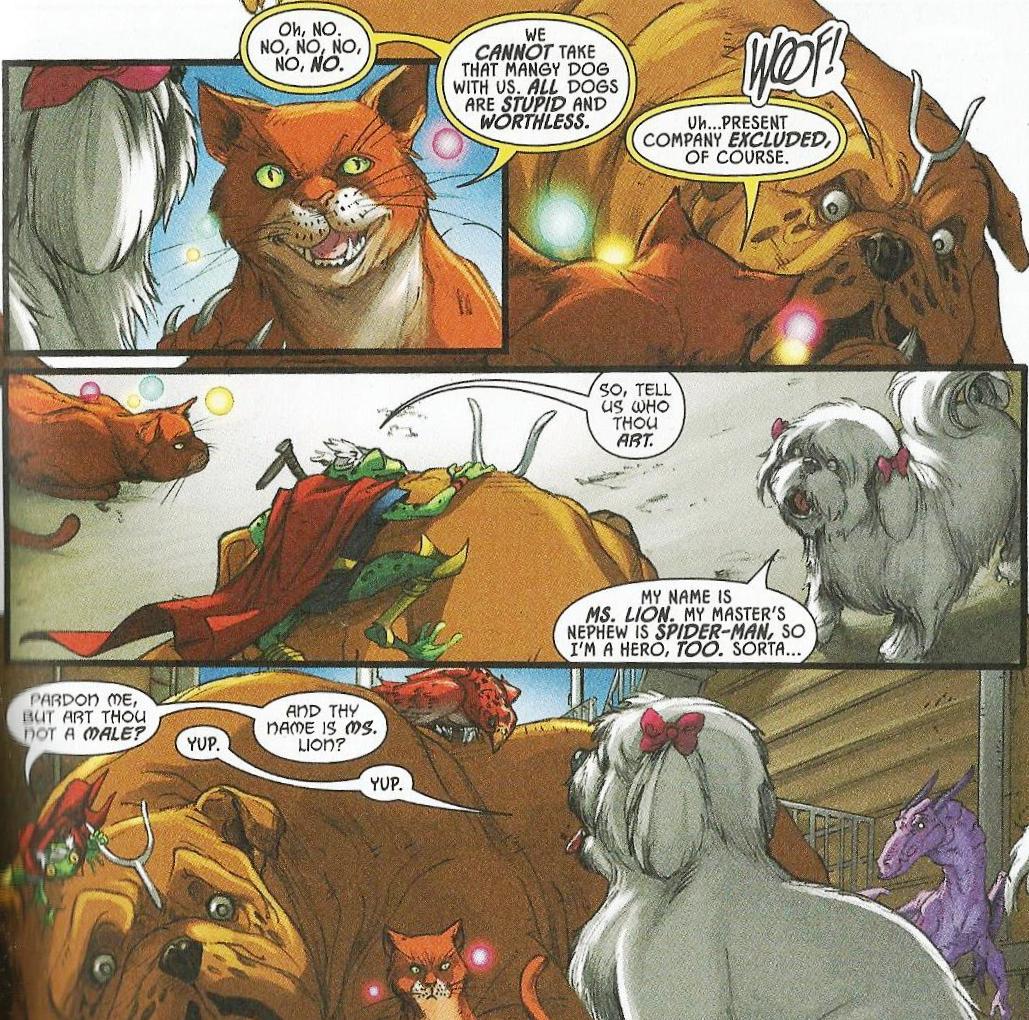 Hey Kids! Remember the 1960s, when Marvel was ‘cool’ and ‘better than Shakespeare’ because they did wanky cosmic bollocks like Silver Surfer, and DC wasn’t, because they did all the stuff with Super-Pets?

Well, time for us uncool ones to get our smug on, because in the 21st Century, Marvel, unexpectedly reversed the trend and restored fun to comics again, with wacky models, leather-slappin’ cowboys, and super-pets – all with a contemporary twist!

Case in point: Lockjaw and the Pet Avengers, in which the ‘fur & feather babies’ of various Marvel super-humans team-up to save the bipeds from menaces only our animal companions can battle!

The Roll Call: Lockjaw, of course, is the giant teleporting bulldog of the Inhumans; Lockheed is the dragon formerly owned by the X-Men’s Kitty Pryde; Redwing is the Falcon’s avian sidekick; Hairball is Speedball’s cat, Niels, with the same kinetic-energy powers as his master; Zabu is Ka-Zar’s Saber-Toothed Tiger; and Throg is, well, a man magically transformed into a frog. Which is not as rare an occurrence as you might think, if you’ve read Thor.

Ah, but there’s one more. Ms. Lion, the foofy doggie pet of Peter Parker’s Aunt May stumbles into the action, and despite having no powers to speak of, manages to talk his way onto the team. Aunt May not being that clever at gender issues, Ms. Lion is in fact a boy dog.

In Attillan, Reed Richards and Black Bolt are concerned that one of the Infinity Gems is somewhere in the vicinity. While Mr. Fantastic and the Inhumans pontificate, Lockjaw finds the gem, and uses its natural affinity to its fellows to lead him to the others, picking up an assortment of super-powered critters on the way. Their quest takes them through time and space, including Atlantis and the Savage Land, until they end up at the White House, where they confront Thanos in a final climactic battle – and gain a new honorary member.

Yes, in many ways it’s extremely silly. But it’s also hugely charming, thanks to scripter Chris Eliopoulos’ skills in giving all the heroes distinctive personalities; aloof and egotistical Redwing thinks himself too good for the team; impatient and irascible Hairball wants nothing to do with them; Lockjaw, like his master Black Bolt, remains ‘silent’ and dignified, guiding the group through his actions; and the good-hearted simpleton Ms. Lion, whom any reasonable editor would have vetoed as a hideous mistake, becomes the heart and conscience of the group.

Artist Ig Guara admirably manages the task of conveying a variety of feelings on the faces of animals – which aren’t really built for expressing that wide an emotional palette – without resorting to anthropomorphic fudging.

This collection includes as bonuses the Tails of the Pet Avengers one-shot, in which each of our heroes has a solo adventure, and the Marvel Pets Handbook, with text entries on the myriad animals in the Marvel Universe who haven’t – yet – won a slot on the team. Also included are variant cover illustrations.

Depending how much of a purist you are, you can ignore the Pet Avengers’ adventures from the perspective of the greater Marvel Continuity, or – to take a completely impartial and unbiased position – if you take the stick out of your arse, the stories fit right into the events of the Marvel Universe, doing no harm to any, and providing a welcome relief from the overall pomp and pretension. 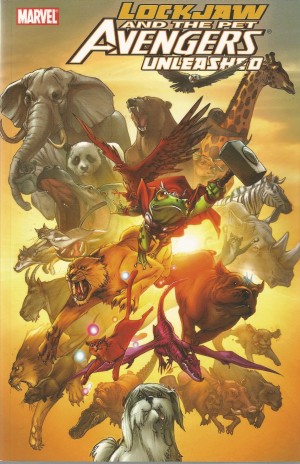 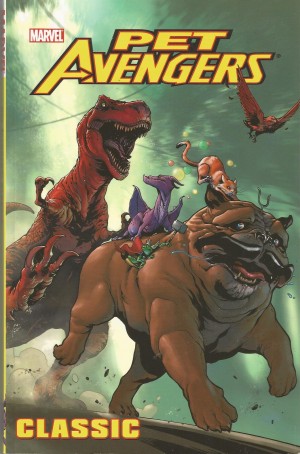 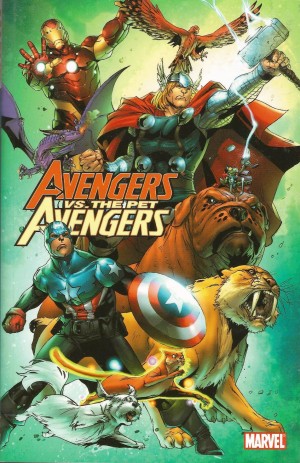